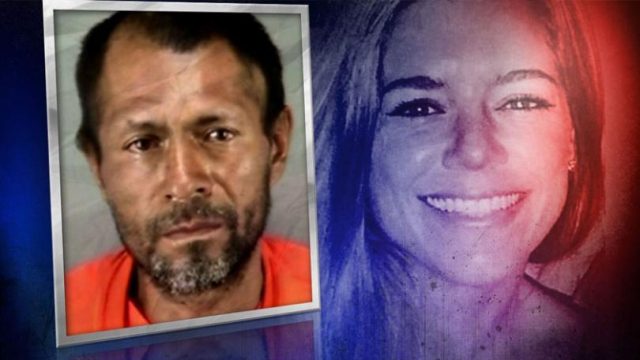 The Constitution does not give people in this country illegally the same Constitutional rights or privileges as US citizens.  When an illegal alien caused the horrible death of Ms. Kate Steinle, people were outraged.  Now, a jury’s acquittal in courtroom meant for US citizens has reignited that outrage.

Kate Steinle’s horrible death and her killer’s acquittal should not be a dog whistle for racists.  It should be a clarion call for illegal alien criminal justice reform.

I understand the law permits illegal aliens the same Constitutional rights as Americans under the 14th Amendment. I just don’t understand why.

I have a doctorate in the law, and I taught law in law school. I have read the “legal reasoning” that extends these US rights to foreign nationals here illegally, and I find it no more convincing than the Dred Scott decision. The arguments that foreign nationals obtain US Constitutional rights through criminal actions via the 14th Amendment argument is literally, stupid.

Illegal aliens or “foreign nationals” in this country illegally are not entitled to convert their illegal entry into US Constitutional rights.  How complicated is that?

America has the right to hold illegal aliens criminally accountable if they break our laws. That is all the 14th Amendment means for non-citizens. They are “subject to the jurisdiction” of our country.  Being subject to punishment doesn’t convey Constitutional rights.

The 14th Amendment protections are for US citizens.  Foreign nationals here illegally don’t obtain the benefits of citizenship through the 14th Amendment, they obtain the burden of punishment if caught. Somehow an activist high court mangled these basic concepts.

American citizens receive Constitutional “equal protection,” foreign nationals are entitled only to due process. The well-developed legal protections for our citizens and strenuous legal burdens placed on the government in prosecuting them were put in place to protect US citizens, not foreign nationals.

To reward illegal behavior of foreigners with new rights and privileges makes no sense, presents perverted incentives, and is bad public policy.

American courts and prisons are jammed with illegal aliens.

In any Courthouse, criminal and traffic dockets are stacked with Spanish speaking immigrants, many of whom are here illegally.  They strain our sheriffs, judges, and innumerable support staff, including interpreters and public defenders.

It is ironic that local law enforcement cannot in any way enforce federal immigration law, but the federal government can and does force localities to manage illegal alien criminal and traffic dockets.

There is a better solution.

Illegal aliens arrested by localities should be turned over to federal authorities and tried in special federal tribunals that would deal exclusively with foreign nationals.

If immigration is to be truly a federal issue, with federal preclusion as the legal basis for shutting out state enforcement, then the illegal aliens should be transferred to federal authorities in each state for a federal tribunal for due process and prosecution.

This will dramatically reduce the financial and resource strain on localities.  While it will create an entirely new set of costs, it does so under the Federal government, the only entity that can recoup or demand these costs back from foreign, sovereign nations.

The Constitution permits Congress to make inferior courts.  Congress can design such courts to handle criminal cases of every type, providing illegal aliens with the due process to which they are entitled under international treaties.  After the proceeding, ICE and the federal government can deal directly with the prisons and the foreign countries from where these nationals come.

I am not at all suggesting that illegal aliens be mistreated, or herded into some draconian system.  I merely suggest that they are given to the feds who have fought for decades to have sole dominion over illegal aliens.

Americans can then have an American-first justice system.

The Kate Steinle case is ripe for second-guessing.  However, any real trial lawyer or expert can give you a million reasons why verdicts like this happen. Among those reasons primarily are our Constitutional legal protections.

We can second guess those jurors, the prosecutors, or the judges all we want.  In reality, the accused didn’t belong in our country.  Once arrested, he didn’t belong in a US justice system designed for the benefit of US citizens.

The solution, to the extent we can fashion one, is to remove these foreign nationals from our state systems and give them over to federal authorities for prosecution, due process, and immigration processing.

The Obama-Clinton Ban on Muslims