The truth is people who use the phrases “my truth” or “Your Truth,” usually aren’t telling “the” truth or the whole truth.  Meet Oprah.

Truth isn’t a possession. It’s a state of reality.

Oprah Winfrey is an amazingly talented talk show host who helped to transform day-time, TV talk programming.  She is also a very talented actress and quite a successful businesswoman.  The degrees to which one must accept those truths vary, but those are truths.

Ms. Winfrey spent years on TV and in movies promoting and advancing the cause and concerns of women as she saw them.  Bully for her.  Her style makes her hard to dislike, and impossible to ignore in the daytime talk format.

As a fine actress and TV host, she portrayed roles about struggling women, often abused and dominated.

As a billionaire Hollywood type, she sat on her hands for decades, soaking up and profiting from a relationship with Harvey Weinstein and said nothing.

The truth is different in real life versus TV.

Last night, she received an award from the Golden Globes and her acceptance speech became a bit of a cause celebrity, if only because NBC tweeted out that she would be the next President, and because her speech touched on women who have for far too long been harassed by insecure, weak, men like Al Franken, among countless others. 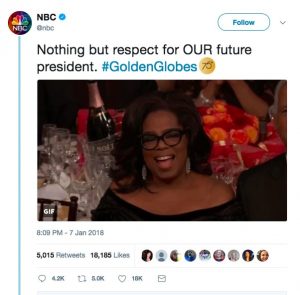 In her speech, Oprah spoke to her audience and implored them to speak out, noting that “speaking ‘your truth’ is the most powerful tool we have.”

Facts and truth are objective, and not subjective.

For example, when I say Ms. Winfrey is a fine actress, that’s true.  How fine and do you like her are different questions and a matter of subjectivity. If you get nominated for an Oscar, you are great at acting.

I am not here to take a gratuitous whack at Oprah, I rather like her.  I wouldn’t vote for her for President, and her political views appear to be at odds with my own.  However, I have no disdain for her. Why would it, the truth is, we can like people with whom we disagree. Thank God, or no one would like me.

Nonetheless, Ms. Winfrey implored me to speak my truth, which in this case is “the” truth.

In all her years in the industry, Ms. Winfrey never raised her voice to speak any truth about Harvey Weinstein.  If Oprah and Weinstein didn’t know each other, didn’t do business together and didn’t run in the same circles, clearly, she would have no duty to speak up about him.

In fact, under the law, she still doesn’t have a duty to call him out for bad behavior not done to her or her family. Neither should she be claiming the moral high ground.

To join the #metoo fight with her rousing speech now, after years of associating with Harvey-the-horrible, truthfully, is a bit self-serving. Moreover, Ms. Winfrey fully back Mrs. Clinton for President, noting it was a watershed time for women.  This despite the obvious fact that Mrs. Clinton played a central role in destroying the women who accused her husband of inappropriate behavior.

As the internet goes wild over thoughts of an Oprah Winfrey Presidential race, I am reminded of a great tweet I saw today.

THE LEFT: Trump's a billionaire tv-star who has no political experience, we need to replace him!

ALSO THE LEFT: #Oprah, a billionaire tv-star with no political experience, would be a great president!

In a country where too many people think they are entitled to their own facts and own truth, we need a return to objective standards and a full-embrace of the truth.

Indeed, that is the truth for all the “Your” truthers out there.