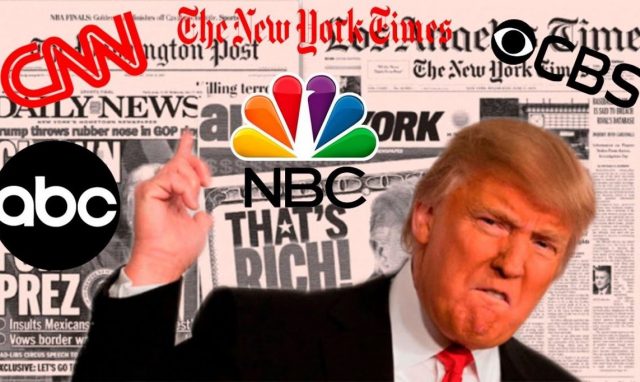 Yesterday, President Trump, giving a motivational graduation speech at the U.S. Coast Guard Academy, said that “no politician in history has been treated worse or more unfairly” by the news media than him.

He was irrefutably correct.

Granted, Trump regularly makes provocative statements that make him an easy target. But the proper job of the news media is to report on current events, not to act as predators hunting and seeking to destroy those whom they deem to be apostates to their leftist agenda.

As a matter of practice, I almost always refer to the establishment news media with the word “news” in quotation marks. I don’t believe anyone can seriously consider their output to be actual news in the traditional sense anymore.

The establishment “news” media consists of most of the major corporate news organizations.  With the exceptions of Fox News Channel and a small handful of right-leaning newspapers, they all monolithically report the same things in the same ways with the same editing, priorities, spin, and ideological agendas. They often even use the exact same phraseology in their “reporting.”

There is no meaningful difference in content between ABC News, NBC News, CBS News, CNN, MSNBC, the Washington Post, the New York Times, the Associated Press, Reuters, PBS, and all of the rest of the establishment “news” media. If you look at one of them at any given time, you’ve looked at all of them.

The primary objective of the establishment “news” media is to advance leftism and destroy conservatism.

Yes, I know that on the face of it that statement sounds paranoid and absurd, but look at the evidence: Over the past 25 years, the establishment “news” media’s profits have been in sharp decline – except for Fox News, which has consistently been at the top.

In a free market, rational actors seek to produce a product for which there is a high demand so as to maximize profits. Fox News has been at the top because it is the only news organization that offers a conservative perspective in any meaningful way. So, Fox News gets the vast majority of conservative viewers, while everyone else divides up the liberal viewers.

The obvious rational action for any news organization wishing to increase profits would be to start offering a conservative perspective so as to get a larger piece of the viewership pie. But none of the establishment “news” media have done so. In fact, all of them have moved further to the left, even as their profits continue to dwindle.

So yes, the promotion of their leftist political agenda is a higher priority to the establishment “news” media organizations than their desire to maximize profits.

And that political agenda is insidious.

The establishment “news” media spew leftist dogma at every turn. They scorn capitalism and celebrate socialism. They scorn traditional values and attack those who embrace them as racists, bigots, and homophobes. They portray the United States as the root of all evil in the world while sympathizing with the world’s most ruthless tyrants.

The establishment “news” media long ago stopped making any effort to present actual news in a fair, balanced, and objective manner. Today they give us accounts of things that might or might not have happened consisting only of those facts that support their chosen narratives and that may or may not be accurate, all intermixed with their views of what we ought to think about those possible-but-not-necessarily-true allegations of fact.

In the past several presidential elections, they portrayed the Democrat nominee in literally messianic terms and the Republican nominee in satanic ones. Last year they openly campaigned against Donald Trump, desperately portraying his election as the end of our republic. At the Democratic National Convention, “reporters” drank wine and celebrated when Hillary Clinton accepted her party’s nomination. They heaped scorn on Trump when he accepted his.

Since Trump took office, 89% of “news” coverage of him has been negative. Anecdotally, a study of CNN programming on May 12th showed that 92% of the coverage was about Donald Trump. and 78% of the guests were opposed to him versus 6% who were favorable.  (13% were neutral.)

The “news” media have intentionally refused to cover the facts that in Trump’s first four months as president the stock market has increased faster than ever in history, illegal immigration across our southern border has decreased by a whopping 85%, and economic growth in the current second quarter of 2017 is projected to be 4% – higher than any of the 32 quarters during Barack Obama’s eight years as president. Back in February, I wrote a column featuring 20 different accomplishments by President Trump that had been ignored by the establishment “news” media.

Instead, the “news” media run with hundreds of hours of allegations that Trump’s campaign colluded with the Russians, despite the fact that there is not one shred of actual evidence to substantiate the allegations.

Yesterday, most of the major newspapers ran front-page headlines alleging that in February Trump tried to convince FBI Director James Comey to end his investigation of former National Security Advisor Michael T. Flynn. These “reports” were based on a rumor that Comey wrote a memo to himself containing such account of a meeting he had with Trump.

Let that sink in: The establishment “news” media, all day long, has been “reporting” and “analyzing” an unsubstantiated rumor as if it is an established fact.

The truth is that if such a memo exists, it would implicate Mr. Comey for not having abided by his legal obligation to report any obstruction into an FBI investigation. But we don’t know if the memo exists or, if so, what it actually says.

But the establishment “news” media are not much for letting facts get in the way of a good smear of a Republican.

Oh, and don’t forget CNN breaking the news last week that President Trump scandalously got two scoops of ice cream while his guests only got one.

On March 21, 1973, White House Counsel John Dean famously told President Nixon that the Watergate cover-up was a “cancer on the presidency.”

Today, the establishment “news” media are a cancer on our entire country.

Mirriam-Webster defines “cancer” as “something evil or malignant that spreads destructively.” The establishment “news” media meet that definition to the letter.

The “news” media are waging war on Trump with the express objective of getting him removed from office. Although the “news” media have been hostile to Republicans for decades (see, e.g., Newsweek‘s attempt to cover up President Clinton’s affair with a young intern until Matt Drudge exposed their duplicity), we have never seen them engage in outright warfare on an American president like they are doing to Mr. Trump.

The “news” media like to compare Trump to Adolf Hitler. Well here’s a more apt comparison: To say that the establishment “news” media are merely “biased” against Trump, Republicans, and conservatives is like saying that Hitler was merely “prejudiced” against the Jews. The truth is that the establishment “news” media have the same seething hatred of Donald Trump, Republicans, and conservatives, with the blazing intensity of the fiery pits of Hell, that Hitler had for the Jews.

The efforts of the “news” media to smear Trump with unsubstantiated innuendo and outright fake news is a danger to our republic itself. These actions by the “news” media are tantamount to a soft coup d’etat in that, at a minimum, they are trying to block his ability to advance the agenda that the American people elected him to pursue, and ideally (for them), they want to see him impeached, removed from office, and imprisoned.

This is banana republic stuff.

Anyone familiar with my writing knows that I am no Trump loyalist. I have been highly critical, as recently as two days ago, of the litany of stupid things that Trump has said and done that constantly undermines his effectiveness.

But the fact that Trump says and does stupid things doesn’t negate the fact that, as he correctly says, no politician in history has been treated worse or more unfairly by the “news” media than him.

Fortunately, the American people have grown so distrustful of the “news” media that they no longer have the influence they once had. The “news” media are held in extraordinarily low regard, with people describing them as “immoral,” “corrupt,” “inaccurate,” and “hurt[ing] democracy.”

Nevertheless, their unrelenting, constant, savage barrage of attacks on our president are taking a toll, and, unfortunately, Mr. Trump and his team have shown themselves to be utterly incapable of countering it.

One possible answer to this problem is something that Trump proposed during his campaign last year (for which he was unsurprisingly savaged by the “news” media): Make it easier to sue news organizations for defamation.

In order for an ordinary person to prevail in a defamation suit, he need only prove that the other person knowingly communicated something untruthful about him that damaged him or his reputation in some way. However, under Supreme Court rulings several decades ago, public officials and others in the public arena must also prove that the untruthful statement was made with “actual malice,” i.e. an intent to hurt the victim.

Most of the untruthful “reporting” on President Trump is indeed defamatory and obviously is being done with actual malice, but courts have set the evidentiary bar to prove actual malice so high that very few public figures ever prevail in defamation suits.

If news organizations were subject to liability for defamation against public officials like the president based on the same standard as everyone else, they would have no choice but to be more responsible and honest in their reporting for fear of being sued out of existence.

For now, though, we must watch as the “news” media continue their banana republic efforts at a soft coup d’etat. And the cancer continues to grow.