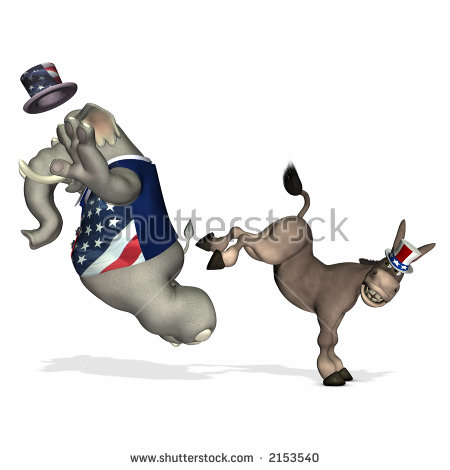 As a Jewish Republican, I’ve always been a minority within a minority.

I always laughed and joked about it with my fellow Jews because it never really mattered. At our temple, we weren’t there for politics.  We were there for fellowship and spiritual support.

Sadly, that is no longer the case.  Some of my fellow congregants, people whom I have come to love as dear friends, have now spewed some of the most malicious and hateful bile about me and my fellow Republicans that could be imagined.

Now that I know how they see me, I can no longer consider these people to be my friends.

Over the past eight years, as a Republican I had to suffer through the administration of a very far-left president who I thought was incompetent and whose leftist policies I strongly and vocally opposed. But I never made blanket statements about all Democrats.

In fact, it was during those eight years that I increased my involvement at my temple, which has a predominantly Democratic congregation and leadership.  I began teaching in our Hebrew school and was elected to our Board of Directors. Everyone there knows my politics, but until now it never mattered. I respected them as fellow congregants and Jews, and they respected me in the same way.

That’s no longer the case.  You see, the Democrats lost the election, and many of my fellow congregants who are liberal Democrats are hatefully unwilling to accept the result of our constitutional process as I did for the past eight years.

Recently, several members of my temple’s current and past leadership signed onto a statement posted on Facebook that contained some of the most vile and defamatory characterizations of Republicans like me that I have ever read.

In this screed, they state that they will not refer to President Trump by name, referring to him instead as “#45” or alternatively as “the fevered Ego currently occupying our White House.”  (I never heard any of them comment on the ego of our previous president, whose every speech was saturated with references to himself.)

The screed goes on to say that “the majority of Republicans in Congress are a real and active threat to me, my way of life, and all the people I love. And unless you are worth billions of dollars, they are a threat to you and your life, too.”

They state that they are joining “the resistance,” as if we’re living in some kind of police state, and they threaten to unfriend anyone who doesn’t join them.  (If we actually were living in a police state, they wouldn’t be able to post this kind of screed on social media. But why haggle over such trivial details?)  They’d better get to work unfriending me.

Then they launch into a bill of particulars that is one of the most malicious packs of lies that I have ever seen put in print about me and my party, including (but not limited to) the following:

We evil Republicans allegedly “persecute Muslims.”  They repeat this over and over as if saying it enough times will make it true, but they cannot point to one single thing that has been done or proposed that actually targets Muslims.  (President Trump’s executive order on refugees targeted seven specific countries identified by the Obama administration as hotbeds of terrorism while leaving untouched our policies pertaining to the dozens of other predominantly Muslim countries around the world.)

We evil Republicans allegedly “destabilized” those seven aforesaid countries.  Again, the screed doesn’t state how we are alleged to have done that and makes no reference to ISIS, the radical Islamist terrorist group that emerged as the result of President Obama’s policies and that has in fact invaded and destabilized those countries.

We evil Republicans allegedly want to “lower taxes on the 1%” while at the same time “increase taxes on the middle class and poor.”  The truth is that the “1%” currently pay more than half of all taxes in our country, and approximately 50% of workers in our country currently pay no taxes, with many actually receiving welfare in the form of “refunds” for taxes they never paid.  But even putting that aside, President Trump and the Republicans have called for a simplifying of the tax code overall and across-the-board tax cuts.  But why state the truth when a good lie serves as such useful propaganda?

President Trump allegedly has an evil plan to “use the Presidency to line his pockets and those of his cronies.”  Of course, Mr. Trump was already a multi-billionaire when he took office, and he has declined to take a salary as president, but again, why let the facts get in the way of some good defamatory propaganda?

We evil Republicans allegedly want to “remove civil rights” from people.  Again, the screed provides no specifics, and no one can point to anything anyone has actually proposed that would strip anyone of their civil rights, but race-based propaganda is the best for smearing political opponents, right?

We evil Republicans allegedly want to “alienate countries that have been our allies for as long as I have been alive.”  This one is especially rich given how hard their messianic President Obama worked to alienate the world’s only Jewish state, Israel, and how hard President Trump has already been working to repair that relationship.  Politics before heritage anyone?

We evil Republicans allegedly want to “take basic assistance from people who are at the bottom of the socioeconomic ladder.” After all, everyone knows that we evil Republicans invented taking candy from babies, right?  Of course, it’s hard then to understand why Donald Trump is the first president in over 50 years to focus on cleaning up our urban centers by reducing crime and increasing educational opportunities.

We evil Republican allegedly want to “suppress scientific research.”  Never mind that it was the Obama administration that routinely skewed climate data to support its agenda and that it is the left who seeks to stifle debate by claiming that “the debate is over” on the theory of “man-made global warming” and by comparing skeptics like me to Holocaust deniers.

We evil Republicans allegedly want to “criminalize abortion [and] restrict health care for women.”  While most Republicans do indeed want to restrict most abortions, we call for penalizing doctors who perform them.  No one anywhere is talking about punishing women who seek them.  And do they really think that the dozens of Republican women and the scores of married Republican men in Congress want to restrict health care for women?  How stupid do they think you are?  But the alleged “war on women” sure makes for a good smear, doesn’t it?

We evil Republicans allegedly want to “increase the number of nations that have nuclear weapons.”  This again is rich considering that it was Obama who paved the way for Israel’s mortal enemy, Iran, to legally obtain nuclear weapons to achieve its stated objective to “wipe Israel from the map.”  More politics over heritage.

We evil Republicans allegedly plan to “give the Ku Klux Klan, the Nazi Party and white supremacists a seat at the table, [and] to normalize their hatred.”  They got me.  It’s always been my life’s dream to “normalize” the groups that murdered 1/3 of all of my people on the planet.  Frankly, this allegation alone makes me sick to my stomach and is enough for me to never be able to look the same way again at my colleagues at my temple who signed on to it.

We evil Republicans allegedly plan to “deny health care to people who need it.”  As the father of a son who spent the first 18 months of his life fighting life-threatening medical conditions, I again take this smear very personally.  It was Barack Obama and his Democrats who raised the cost of health insurance to the point that millions of people can’t afford health care.  It is the Republicans who are working to repair that damage and make health care more affordable.

We evil Republicans allegedly want to “increase voter suppression.”  Because making people show an ID card to vote like they have to do to use their credit card at the grocery store is “voter suppression,” right?

We evil Republicans allegedly want to “normalize tyranny.” You guessed it:  No specifics, but it sure sounds good as a smear, doesn’t it?

We evil Republicans plan to “eliminate or reduce ethical oversite (sic.) at any level of government.”  Of course, it was Obama’s IRS that targeted conservative groups, just as it was Obama who wiretapped numerous allies and perceived political opponents. Meanwhile, one of the first things President Trump did upon taking office was issue executive orders tightening ethical rules for people working in his administration.  But, again, why let the facts get in the way of a good smear?

We Republicans allegedly “blame minorities for their condition [and] their inability to thrive.”  As discussed above, Trump is actually the first president who is meaningfully working to improve the living conditions and opportunities for minorities in our urban centers – conditions resulting from decades of Democrat mismanagement of those cities.  But just keep playing that race card!

The screed then goes on to state that “I will stand for honesty, love, respect for all living beings, and for the beating heart that is the center of Life itself.”  That is except where it pertains to Republicans like me.

And so, this is how friendships end.  When people allow their political hatred to overcome their reason and to control their hearts, important relationships crumble.  Sadly, that is what has happened here.