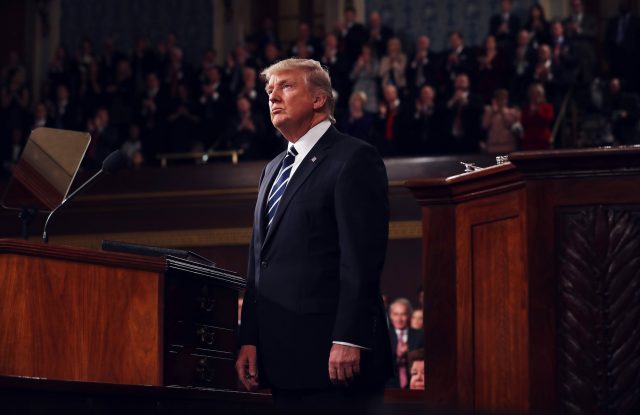 Who was that guy at the podium last night?

If you read the typical daily coverage of President Trump by the establishment news media, you didn’t recognize the man who appeared before Congress yesterday.

The Donald Trump we see in the news media is a fascist who wants to round up all immigrants (illegal and legal) and push them over the border into Mexico, an isolationist who wants to ban all immigration, dismantle the United Nations and NATO, and set punitive tariffs on all imports, a Nazi dictator who wants to shut down the news media, a bigot who wants to keep women barefoot and pregnant, blacks back in bondage, Jews in concentration camps, and gays in forced conversion therapy.

Did you see that guy last night?  Me neither.

Last night the entire country got an unfiltered look at the real President Trump.

The Donald Trump we saw last night was caring, loving, inspirational, and sincere.

The Donald Trump we saw laid out a vision for, as he eloquently called it, “a renewal of the American spirit.”

And he expressed a vision of a restored America.

Far from the news media’s caricature of him, Trump spoke of inner cities where people can safely walk the streets and kids are getting educations that enable them to reach their full potential.

He spoke of eliminating the government red tape that for too long has been stifling American innovation.

He spoke of renewing our partnerships and friendships with our traditional international allies.

He spoke of taking meaningful action to protect the world from the scourge of radical Islamic terrorism.

He spoke optimistically of a not-too-distant future that recalled President Reagan’s vision of a “shining city on a hill.”

And he extended a hand of friendship to the Democrats and invited them to work with him to achieve these lofty goals.

Trump gave a great speech by any measure, but thanks to the low expectations resulting from the caricature of him created by the hostile news media, it ended up becoming instantly iconic.

Furthermore, the same news media that have been castigating Trump have, at the same time, been presenting his Democrat opponents as heroes of the people who are safeguarding us from Trump’s agenda of oppression.

Last night, however, the American people saw the Democrats sit through Trump’s entire inspirational speech with scowls on their faces, even when he extended his hand in friendship.  These were not the heroes we’ve seen portrayed in the news media.

When two-thirds of the American people want the Democrats to work with President Trump, we are not going to be impressed with their stubborn partisan refusal to do so.

A flash poll taken immediately after the speech showed fully 70% of the American people optimistic about our future, thus proving that the news’ media’s caricature of Trump has now been shattered.

So, President Trump’s speech last night was not just a triumph in renewing American optimism.  It was an unmitigated triumph over the hostile news media that have indeed been conducting themselves, as Trump recently described, as “enemies of the people.”