The City of Baltimore is finally safe.  It can move forward.  All of its problems were cured two nights ago night when city workers removed the confederate statues that have been destroying the city.

Some wrongly believe Baltimore’s problems are the result of irresponsible liberal and “progressive” rule for nearly 70 years.  Democrats have run Baltimore for more than 70 years.  It is a liberal city, in a liberal state, represented by one of its own sons, a liberal democratic Congressman.

Some more radical elements of society think Baltimore’s problems could be related to a broken culture of drugs, crime, welfare, and fatherlessness.  Only 16% of Baltimore teens are raised by married parents, undoubtedly due to those confederate statues.  Moreover, confederate statues have led Baltimore blacks to a unwed birth rate of nearly 72% by 2010.

Rated the 7th most dangerous city in America, crime is rampant thanks to those statues.  Remarkably, not one of the many reports and sociological studies ever made on crime and crime rates in Baltimore tagged the confederate statues as a cause.  Clearly, that was a methodological oversight.

Baltimore has also been wracked by drug problems and riots, neither of which is linked to confederate statues.

When no one you know has a nuclear family of educated, loving, caring, employed, professional parents and siblings, your society is devolving.  It’s not your color; it’s your culture.  And, it’s not the fault of confederate statues.   Some may claim that is it a matter of systemic racism.  By whom? Democrats have been running the city since 1947?  Moreover, the problems with education, drugs, fatherlessness, drugs, and crime are on the rise, since 1970.

Even if a systematic system of racial discrimination disadvantaged Baltimoreans more than most major cities, since 1947 … and well before … shouldn’t it be progressing under progressivism?

One might argue this confederate statue issue has made people in Baltimore dumb.  Well, there is evidence of educational problems in Baltimore City.  Think about this … in the inner city of Baltimore, there are six schools – six entire schools – where NOT ONE student passed the Maryland minimum standards of proficiency for English and Math.   The good news is, however, that those Confederate Statutes that have been holding Baltimore back are now gone.

It’s time to break the cycle of stupid. 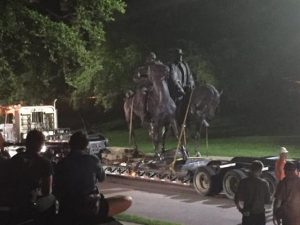 If we come back to this date one year from now, nothing in Baltimore will have changed, except for the pigeons.

Jobs won’t be moving in.  Kids won’t be getting educated. Drugs won’t disappear. Crime will not evaporate. Hate won’t cease or subside. Life isn’t going to get better because you took down some statues. You can erase history.  You can chose to ignore it … or you can learn from it. That is the choice of the people of Baltimore.

In fact, for those in charge of Baltimore, I’d ask them this simple question:

What metric of success should we look at and use to measure, in one year, or five, how these statue removals helped Baltimore?

If Baltimore wants to fix its problems, it needs to work on a broken culture.  It needs to replace failed leadership, rather than old statues.  It needs moral, social, and economic leadership that restores families, faith, hope, and education to the people of the city, irrespective of their color.

Baltimore needs to return to history … not the failures … but the parts of our common culture that work.

Baltimore, like most of America, can do better if it focuses less on color and class … and more on family and responsibility.

The worst buzz-word ever created in this country was “white privilege.”  We need to replace it with family privilege.  That seems to be the highest order of need in Baltimore.  I am guessing fatherlessness and broken homes have a much stronger connection to social and economic problems in Baltimore than do race, or certainly old statues.

You know what the greatest privilege I ever had was?  Parents.

Mine loved me, cared for me, taught me right from wrong, and raised me to be accountable.  That’s a privilege.  With that I agree.  They didn’t do that because I was white, or because they were wealthy.  They weren’t.

They were working class stiffs with 7 kids, one of whom was profoundly disabled.  Their parents were immigrants, Irish and Italian.  Their legal immigrant families were treated like crap, and they never had a government check, subsidy, safety-net, or job preference.

My parents lived on family, faith, honor, and hard work.  We had a father who when we left the house, told us that we carried his name on our backs.  He said, “you leave here with it clean, come home with it the same way.”  If we met with trouble at school, with any adult, or with the police, we knew that the justice meted out by family for dishonor was worse than anything the system might give.

It wasn’t our parent’s color that provided some privilege or advantage …. It was the choice of their culture and community.

Baltimoreans need to make those choices.  Guess what, they are hard.  They are every day choices.  They are far harder and less politically easy than hauling off some statues in the dead of night.

For Baltimore, and every city and town like it … success is written by the choices of their people.  It is not defined by any statue.  If those statues stand, they ought to do so for that lesson alone.