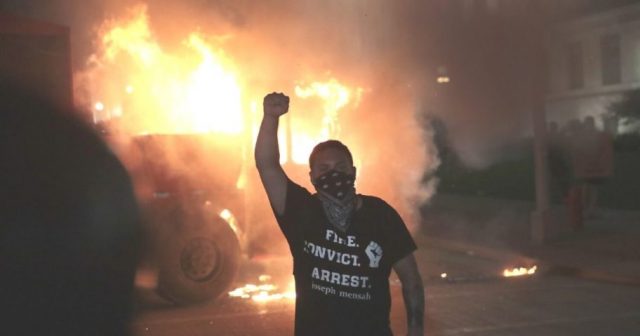 Joe Biden’s America is at war  … with American principles. Democrat cities are burning. Riots, looting, arson, months-long protests, and of course, a wave of crime and murder are the Hallmarks of Biden’s America.  You want to stop it? Just elect Biden, right?

Biden’s America is a riot … and I don’t mean it’s funny.  It’s not. The broken children of broken, progressive homes are out on the streets burning cities to the ground. They are destroying minority-owned businesses, looting in the name of justice, and inciting a race-based war to complement Mr. Obama’s war on police.

In the battle of phony narratives, the democrats and their altleft constituents aren’t fooling anyone. America is burning, and only the most radical leftist and Trump-hating liberal elites think the fires are the fault of the President. These are Democrat voters, democratic sympathizers, Democratic operatives, and democratic funded organizations that are the backbone of disorder, death, and destruction.

There are no Republicans out there. Let’s test the hypothesis of the left that this is “on Trump’s watch,” or that these agitators are really altright organizations trying to make noble “mostly peaceful” protestors look bad.

If that is true, why are Mayors and cities refusing federal help to clean out these dens of altright subversives?  Take off your “I hate Trump” tinfoil hat for a minute and work tenaciously to fire up some independent thinking, born of logic.

From San Francisco to Chicago, to New York, and in majority democratic cities under tight democratic rule for decades, the streets are on fire?  In Portland, armed and black-clad radicals meet under cover of night and assault the police and federal courthouse … every night for 3 straight months. Where was the injustice in Portland?

The war on western civilization has long been found an ally in the democratic party.

Historically, democrats attacked marriage as patriarchal. They attacked pregnancy as an inconvenience. They wanted divorce to be easy, abortion to plentiful, and fathers to be optional. From the 1970’s, they have been defining deviancy down, attacking the roots of liberty, and actively undermining free-enterprise.

Democrats have, perhaps unwittingly, built an army of the indecent.

They have a constituency chained on subsidies and government aid, educated on hatred of American principles, and brainwashed to believe that those without what they want … have had it stolen by fat, wealthy, racist, republicans. After 50+ years of this devolvement, you get a large population of hate warriors. Ironically, just a few years ago, a left-leaning law school friend told me that there is no such thing as an “altleft” and that I should stop trying to make it “a thing.”  I didn’t make it … I just defined it.

This is Biden’s America.

He has been a US Senator or Vice President for nearly 50 years. This is the Democrat’s America. These are their children, these are their voters, and these are the cities they rule.  As I wrote four years ago if you want to make America great …. You need to make great Americans. The democrats don’t seem to do either.

Democrats now tell us that it is Trump ripping America apart. No. It’s Democrats who don’t believe in the civil society, and who are still rioting as they have been since before his inauguration because, well … they lost an election. They are trying to lose another, and the altleft is helping. It’s all part of the war on Trump … and America.

So … if a 78 year-old white man is going to make this all better by being elected, why wait?

Sure, Mr. Biden finally came out and condemned the violence. The polls said he must, and someone gave him a carefully scripted statement to practice, read, and then retreat from the press. Great. You are opposed to violence. Now, make it stop. Tell the army of your supporters to go home, act like adults, be civil, and start being productive.

You know why Mr. Biden won’t do that?  He can’t. They wouldn’t listen. They would turn on him, turn off the money trail from leftwing organizations, turn down the turnout machine, and ultimately, they don’t give one damn what that old fool says. He’s a placeholder. He is there until Kamala takes over, then AOC.

Joe Biden has no following. He has what every weak politician in both parties has … people who buy his principles and lead his agenda. In the army of the indecent, it’s worse. He has a bunch of spoiled radicals taught to hate and distrust him.

Joe Biden can’t stop the violence, even if he wanted to do so. But Joe and the Democrats have a bigger problem. They can’t even ask or try. Why?  What if it did stop?  Then it would show that they were behind it to begin with. They are not directly behind it, to be sure. This is an army of anarchist who grew from their radical agenda, but not an army of loyal followers.

So, if Joe can’t stop the riots … what is his plan? Why elect him? In fact, in no city besieged by the altleft have the leaders been able to stop them. Few have tried, with most constraining their own police. And, in other jurisdictions with heavily progressive populations, those democrats who oppose the radicalization of Kennedy’s prolife, pro-business, pro-military democratic party are being replaced with Soros funded kooks.  Prosecutors refusing to prosecute. Prosecutors fighting to release criminals and to eliminate cash bail. Left wing loons leaving the streets to mobs, thugs, and rapists in the name of community policing.

Coming to a liberal suburb near you, the dumping of criminals, the forgiveness of prosecution, the watering down of sex offender charges and lists, and then an ambitious “affordable” housing movement to redistribute votes into the jurisdiction.

This is Joe Biden’s America … and while his lack of command of his faculties is sometimes funny … the commanders of the army of indecency are not. The riots are growing. The fighting is real. The new civil war is here.

This is Joe Biden’s America.

Soon, they will be marching down your street, demanding you raise the BLM flag or your fist. If you submit to Biden’s supporters … neither Biden nor you will soon recognize or have and America.