It would be a monumental statement of support. The National Rifle Association has its headquarters in Fairfax, Virginia.  Maybe it shouldn’t. There is nothing it does in Fairfax that it can’t do in many of the great Constitutional Counties now fighting to support the Second Amendment in Virginia.

The NRA should rally behind the Virginia Second Amendment sanctuary movement and stand with its troops.

At last count, 79% of counties in Virginia had declared themselves Sanctuary Counties. They have done so in the face of threats from hard-left leadership at the top of the Commonwealth. With the Virginia legislature about to move firmly into the hands of progressives, Constitutional Rights are under siege. Fairfax County has been at the epicenter of the hard left turn.  Maybe it is time to reward constitutional patriots fighting for their rights by moving to their county and joining Virginia’s liberty revolution?

Obviously, the NRA is just outside the beltway so that it can stay within striking distance of the halls of Congress. Everyone understands that. However, its headquarters is the heartbeat of the Second Amendment nationally, and its world-class staff is working on issues around the country. Frankly, most of its employees don’t need to be in Fairfax, and the NRA and its team could do better, serve better, live better, and enjoy broad support among like-minded, patriotic, liberty-loving, Second Amendment Patriots across the Commonwealth.

As an example, one of the first independent cities to declare itself a “Constitutional City” was Poquoson. It was a 7-0 vote.  That’s a great location. The great Commonwealth has many others. Perhaps the NRA can dump some overhead and find great space in the Tidewater area and in Southwestern Virginia. In beautiful Tazewell County, the Board of Supervisors not only became a Sanctuary County but with input from legal counsel, it passed a resolution to empower and raise its own militia, citing the Virginia Constitution.

Why not take an Amazon approach and split its headquarters strategically around the Commonwealth, leaving only a smaller outpost in Northern Virginia? It could utilize better, much smaller, cheaper, flexible space.  It can move so much of its training facilities into Constitutional counties, choosing facilities that are still close to trains and airports and accessible to members.

Indeed, the NRA’s national mission would be helped. The battle lines are forming. Virginia is going to be the battleground for all future legal challenges, as strong Second Amendment advocates will be taking on virtually every piece of litigation that rolls out of Richmond.  Many of those fights will finish at the Supreme Court, but others can be won by slowing or shaping the legislation in Richmond.

The NRA is resident in the Commonwealth. But the DNA of individual freedom and Virginia’s Liberty Revolution is now a grassroots movement happening outside of Fairfax. The NRA is essentially behind enemy lines. Its offices are often targeted regularly by protesting kooks. Fairfax is the epicenter of the hard-left, anti-gun, anti-liberty movement.

Recently, it sent a letter to members discussing proposed bans and the Virginia movement. Here is what the NRA said:

“Northam’s attempt to portray his Bloomberg-sponsored gun ban as constitutional is an absurd and transparent attempt to forestall the surging Virginia grassroots gun rights movement. Virginia’s gun owners have every reason to take defensive action against Northam and Bloomberg’s unconstitutional gun control agenda.”

Virginia’s well-regulated militia agrees. But sitting in a defensive posture is all this movement wants to do, nor is simply writing letters. It wants and craves action.

It’s time the NRA join the well-regulated militia that is growing by the minute in free Virginia. Likewise, it is time to send the important message, “We are with you … literally.”  We stand with, work with, live with, and count on Freedom-loving, liberty-protecting, Second Amendment advocates. Together, the NRA and Virginia’s Second Amendment movement can work to bring liberty back to Fairfax. In the meantime, the army of liberty is based broadly across the Commonwealth, and it is time the NRA stand with and lead the movement. 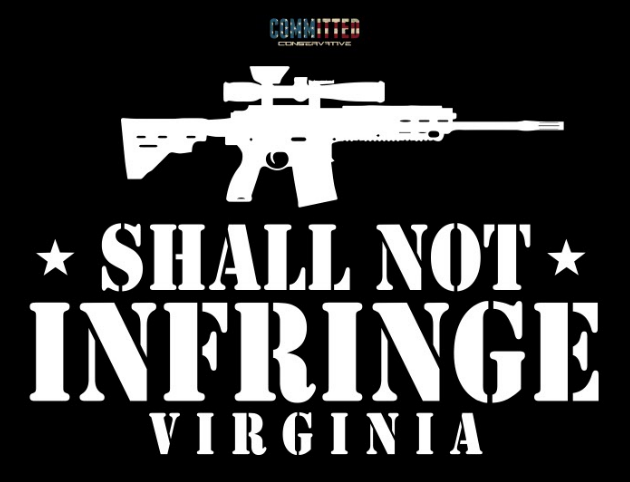 Liberty RevolutionHelp get the word out...and protect and defend America!

We have shirts, jackets, hats, mousepads, phone cases, and MORE! Many different designs to help you lead the charge against the assaults by the Left to our core American principles.

Get Yours NOW!!
MORE STORIES