If your child has cut class today to join a left-wing national walkout movement in protest of the Bill of Rights, you have failed as a parent.  You are either Constitutionally ignorant or you are a partisan zealot who has misinformed the same kid you can’t trust to make his or her bed.

Most American adults are so misinformed about the Constitution, it is frightening. Now, we are to believe their kids are the policy wonks and Bill of Rights experts this country has been missing for a few hundred years.

The only net positive about the walkout today is that in many areas, kids are leaving failed government schools that ration to them misinformation. Gleeful parents are posting on social media their pride for their kids standing up to be heard.

It means that if protesting your own Second Amendment, Bill of Rights is so important to you, then I support you doing it.  And, I support the schools enforcing their disciplinary rules against every student.

Yes … this should go on your permanent record.

The best lesson of the day isn’t that Americans are ill-informed about the Second Amendment and the causes of gun violence by broken humans raised in broken homes generated by a decaying, left-wing society. The best lesson is that actions have consequences.

If you want to “make a stand,” and “stick it to the man,” then your stand is meaningless if no price is to be paid.

Government schools have no right to endorse or excuse kids engaged in political dissent that breaks the rules, no matter the popularity of the event. Indeed, public schools have an obligation to enforce their rules scrupulously without regard to the political message or intent.

Inform yourselves. While you are at it, inform your kids. Someone must since they cut school today.

America … the enemy of your children is you. An uninformed populace incapable of critical thought, desperate to cede to the government its most important fundamental right, is a danger to liberty and the civil society.

Guns don’t have anger issues, mental health issues, suicidal tendencies, psychotic breaks, or sociopathic tendencies … people do.  And they grow worse in a decaying culture of immorality, indecency, divorce, and fatherlessness. Of the 27 deadliest shootings of all time, 26 were by kids without fathers.

Get out and protest the culture you built.

Speaking of protesting the culture you built, yesterday people had shared my piece on the National Walkout. Not surprisingly, some on the left were outraged by my “bullying” of kids, suggesting that the “tone was inappropriate” and that it was wrong to call kids ignorant and their parents stupid.

One parent not only mangled the Constitution but continued to mix-up “stupid” and “ignorant.”

Everyone is ignorant of something. I am ignorant of brain surgery, for example. And, as for stupid, you can be intelligent by still do stupid things.

Letting your Constitutionally ignorant children protest the Bill of Rights to limit, prospectively, their own freedom is stupid. letting them do so with signs like this, is parental incompetence, wrapped around stupid. 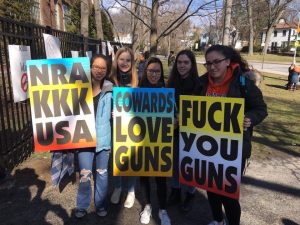 In this particular photo, these kids combine ignorance with stupidy and partisan hate … learned from angry, ill-informed, stupid parents.

If you sent your daughters out there to hold signs like these … to be shared for a lifetime on the internet … trust me, you are stupid. Here’s the key piece too, my tone is apparently something missing from your life. Maybe your parents failed you, and in the broken culture of radical leftism, the deviancy continues to be defined down by you and now your children.