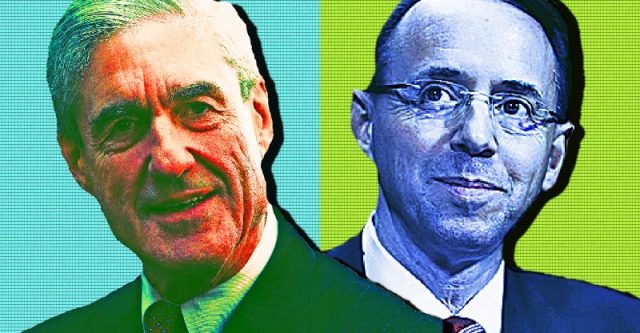 It is no longer necessary for any evidence to exist in order to justify a massively disruptive and often defamatory multi-million-dollar investigation of high-ranking public officials.

Now all that is necessary is an allegation.

The allegation need not be of any crime. It can be an allegation merely of conduct that the accuser doesn’t like.

The allegation also need not be supported by any evidence. It can be based entirely on innuendo by the official’s political opponents/enemies for the sole purpose of political gain.

I call this new precedent the Mueller Doctrine because the precedent was set by Special Counsel Robert Mueller and Deputy Attorney General Rod Rosenstein, who appointed Mueller to investigate allegations of conduct by our president, unsupported by even the slightest molecule of evidence, that, even if true, would not constitute a crime.

If Mr. Mueller had the slightest bit of professional integrity and prosecutorial ethics, he would have refused the appointment by Mr. Rosenstein to be special counsel on the grounds that there was not (and still is not) any evidence of any crime, and accordingly it would be improper to use of the immense powers and resources of the federal government to disrupt the personal and public life of the president and those close to him.

But Mueller accepted the appointment and has engaged in a 16-month (so far) witch hunt in a desperate effort to find something – anything – with which to charge our president.

In so doing, Mueller created a new standard for investigations of public officials, and Republicans should apply the same standard to Democrats: In any instance where a Democrat official is suspected of doing something bad, regardless of whether the suspected conduct constitutes a crime and regardless of whether any evidence exists to support the suspicion, that Democrat should be investigated with the full powers and resources of the government until something is learned that can be the basis for charging him or her with a crime.

Here are a few cases to get started in applying the Mueller Doctrine:

Sen. Cory Booker (D-NJ) – Today I saw an unsubstantiated report that Sen. Booker blatantly lied when he claimed that he heroically engaged in “civil disobedience” by releasing information that he knew to be unauthorized by the Senate for release. Reportedly, he knew at the time he released the information and at the time he made the claim of “civil disobedience” to pander to the radical leftists in his party that the information had, in fact, been authorized for release. There is nothing illegal about a Senator lying to the public – if he even did so – but this matter should be thoroughly investigated.

Hillary Clinton (former Democrat senator from NY and Secretary of State) – Where to begin? Mrs. Clinton has been suspected of everything from insider trading to violations of the Civil Service Act to bribery to extortion to murder. There is evidence to support at least some of these suspicions, but that’s beside the point. These suspicions need to be thoroughly investigated.

Barack Obama (former Democrat President) – Mr. Obama has been suspected of assuming the office of the presidency despite not meeting the constitutional requirement of being a natural born citizen. Most of the evidence indicates that these suspicions are wrong, and even if they are right, it is probably not a crime for him to have assumed office under those circumstances, but the suspicions exist and should be thoroughly investigated.

Rep. Keith Ellison (D-MN) – Rep. Ellison has long associated with prominent antisemites and is widely believed to be bigoted against Jews and white people. Bigotry, of course, is not a crime, but these allegations nevertheless need to be thoroughly investigated. In addition, he has been accused of sexual assault by at least two women. There is no evidence that has been released to the public other than these women’s allegations, but those allegations must be thoroughly investigated.

Sen. Elizabeth Warren (D-MA) – By word and deed, Sen. Warren is a socialist bordering on communist, and she has encouraged violence and disruption against Republicans and conservatives. Her radical ideology, ridiculous as it obviously is, is not a crime, and her inflammatory rhetoric is constitutionally protected. Nevertheless, I find her to be offensive, so she needs to be thoroughly investigated.

Rep. Adam Schiff (D-CA) – Rep. Schiff is the Ranking Democrat on the House Intelligence Committee. He has done everything in his power to contrive some kind of crime or scandal by President Trump and has been suspected of leaking classified information to the news media. Working to smear the president is not a crime, and there is no concrete evidence that he has leaked classified information, but these suspicions must be thoroughly investigated.

Alexandria Ocasio-Cortez (Democrat Representative-Elect-NY) – Ms. Ocasio-Cortez is a self-proclaimed Democratic Socialist (i.e. socialist) who defeated a longtime incumbent for her party’s nomination and presumptive election to the House. She has become nationally prominent for going around the country displaying her alarming ignorance of the most basic economic principles and of any understanding of international politics. None of that, of course, is a crime, but obviously the prospect of her holding a vote in our federal legislature is dangerous to our country. Accordingly, she must be thoroughly investigated with the objective of rendering her ineffective and removing her from office by any means possible. Furthermore, that effort must begin immediately. Waiting for her to be sworn in would be too late.

Fair is fair. It is time to finally start applying the standards used against Republicans to the Democrats. By applying the Mueller Doctrine in both directions, either the political war will no longer be one-sided, or some sane and just prosecutorial standards will be restored.

The Left Are More Dangerous Now Than Ever