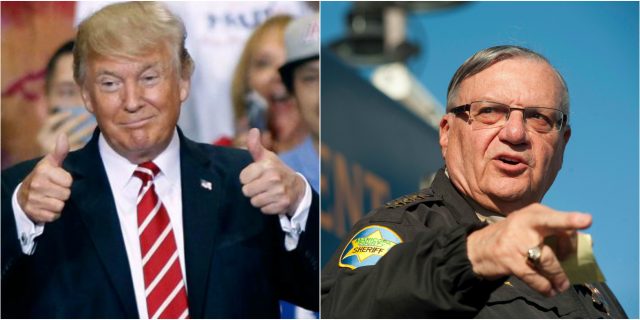 Donald Trump pardoned an 85-year-old man convicted of a misdemeanor.  The internet exploded. Trump, that crazy, white supremacist should be impeached, some suggested for pardoning this man who, according to the internet, had repeatedly violated the rights of “people of color.”

All right … settle down boys and girls.  Don’t let all your stupid out in one anti-Trump hissy fit. In the pantheon of presidential pardons, the Arpaio pardon isn’t even in the top 1000 or so of outrageous, indefensible, pardons.

Heck, President Obama pardoned a terrorist who worked for a terror group responsible for 130 bombings.  Indeed, the list of Obama pardons is a who’s who of bad hombres.

Let’s get some facts straight … today.  Arpaio was convicted of criminal contempt for violating a court order.  The violations of the order were actually civil contempt cases, but the judge referred the case for criminal prosecution after ruling that the civil violations were intentional.

What were the violations of law which the court found this 50-year lawman to have committed?

His office had been detaining and holding people suspected of being in the country illegally after a court said it could not do that.  Mind you, it wasn’t that Arpaio was holding people who weren’t here illegally, it was that the Federal Court said that a local sheriff had no right to hold and detain because under current federal law, the entire field of immigration enforcement is the sole legal purview of the Federal Government.

Americans need to know we have a long body of law permitting locals to enforce immigration law against people suspected of being here illegally.  That case law includes courts that have held officers have reasonable suspicion to stop and and investigate individuals based on foreign descent and speaking a foreign language.  Under a doctrine of federal preemption, Federal courts have held that NOW only federal authorities may do this job … or not do it … as has been the case.

Likewise, changes in the law have imprudently granted certain Constitutional rights to illegal aliens, while other changes have made the burden of reasonable suspicion harder on law enforcement when race is any factor … even among many.

Thus, when the feds would either not enforce the law, or catch and release criminals without detaining them, Arpaio found himself and his city under-siege by illegal aliens, their friends, family, supporters, lawyers, and do-gooders.  America did not become overrun by illegal aliens because federal enforcement was great.  It became over run because for nearly 5 decades, federal enforcement focused solely, if at all, on criminal felons.  And, in that period, legal changes further put the cuffs on local law enforcement, rather than illegal aliens.

I’m a lawyer, and I respect the rule of law.  In fact, respecting that law is why I have long burned with anger that our federal government and state governments would knowingly, intentionally, and radically ignore or break the law to aid and abet illegal aliens.  Even today, major cities in this country consider themselves “sanctuary cities.”  They encourage illegal aliens to enter and stay in their cities, knowingly, and to evade federal authorities who have now, under Trump, been permitted to look for them.

Those actions are federal felonies and innumerable elected officials, based on the local laws they pass and their respective public statements, have violated the anti-harboring laws and should be prosecuted as felons.  Yes, we can prosecute these individuals.  No one ever does.

The felonies of others don’t give Sheriff Joe a license to violate the law.

The Constitution permits the President unlimited powers to pardon people convicted of federal crimes.  In fact, no court has ever stepped in to stop that power, and the last court asked to do so made clear it could not.

Circling the internet tonight is the opinion of a radical left-wing fruit cup from Harvard who says that this pardon could lead to impeachment.  Technically, impeachment is a political process.  So, if you can find 67 US Senators to support removal after the House passes such articles, nearly anything can be used to impeach a President. The argument is specious, circular, and silly. But hey, he’s from Harvard, and they let their people say crazy stuff … like the abuse and misuse of the legal franchise by Larry Tribe to push an “Emoluments Clause” ruse on the public.

Contrary to the argument foisted on the unwashed resistance by Mr. HAAAvard … Trump’s use of the pardon power here was completely legal and entirely proper.

The President doesn’t need a reason to grant a pardon. In this instance, he indicated that the sheriff had served honorably for over 50 years in law enforcement.  That’s true.  He must have thus felt the conviction on such a “crime” … which might have brought a prison term … was inappropriate given the facts, the age of the defendant, and the highly charged political atmosphere surrounding the case.  Moreover, the process of relief for the sheriff would have been costly and time consuming, such that he might not have survived the ultimate appeal on all these issues.

The President’s pardon meted out justice, as he saw fit.  Ironically, a President doesn’t get to act unilaterally on much, but on pardon grants, he is without a single check or balance … except technically impeachment.  The check on a President’s pardons is political.  In this case, as in all he does, those who love him will cheer, those who hate him will keep on marching, resisting, rioting, and whining about all he does.

The great President Obama once said, “elections have consequences.  I won.  You lost.”  Indeed.

Mr. Trump pardoned a man who stood, nearly all alone, to fight against an illegal invasion of foreign nationals that every one of us saw, but our government refused to stop.

Aided by both parties, abetted by liberals and progressives in major cities, and excused by the federal judiciary, the illegal invasion of the United States by foreign nationals was one of the great scandals of our country. Mr. Arpaio fought it alone, and those who threw in with the illegals hated him for it.

The Americans … they loved him for doing the job American politicians wouldn’t do.

Neither I nor this site have been cheerleading for the President.  In fact, we have been harsh critics.  Diehard trump fans who consider them “conservatives” bristle at our often-pointed criticism.  Ironically, when we do an honest job of analyzing the false attacks against him, my liberal friends pour out of the woodwork to call me a “Trumper.”  So poisoned by our red v. blue society have we become, that people can’t read, analyze, and consider a piece about an issue.  It must support the team or denounce the team … or partisans will insist you are on the other team.

Conservatives don’t have a team.  If we do, our team is America and her citizens, which is the team for whom Mr. Arpaio fought.

That Mr. Trump wasn’t my pick, or that I have said his is unfit for office, doesn’t mean he gets everything wrong.  Like most of his actions, he could have done more to blunt the criticism on this pardon with a better, fuller, more detailed statement that admonished the sheriff for law breaking, but focused on the likely punishment and the need to do justice under the facts.

Truthfully though, who would that have pleased?

The anti-Trump resistance wants him out or dead.  For the handful of people like me who try to analyze his actions on a case by case basis, wary of his shortcomings, a better explanation might have impressed me. Still, this is the right application of the pardon power, and I am happy that we are not talking about a terrorist or an international, high profile, financial fraudster.

Sheriff Arpaio stood alone and faced down an army of invaders and an unfriendly federal government.  He bucked the system and learned, as many lawyers know, federal judges take their order seriously.  In the end, the President put America first, and he likely thought Sheriff Joe’s long service and courageous stance earned his intervention.

Truthfully, Trump’s pardon was a strong, affirmation of his commitment to combat illegal immigration and to end the practices of the last 5 presidents. That’s the American view. It was a racist move to support a racist who violated the “civil rights” of Hispanics, if you are on another team.