Trump’s Phoenix rally brought together two angry, former lovers, whose passions for each other long ago turned to hate.  Unfortunately, one is the President of the United States and the other is an international cable “news” and opinion network.  They are dysfunctional co-dependents. They are bad for America.  If one were to channel a former NJ Governor from his famous ad campaign one might hear, “Trump and CNN: Perfect together.”

The President is simply unwatchable when he channels his inner child and spoiled, indulgent, ill-informed, crude, bombastic, angry, billionaire persona. The President never misses an opportunity to make smaller the office of the Presidency.  He mixes his hurt feelings and ego with his lack of class and total inability to speak articulately, and what we get from Trump unleashed is a Trump unhinged.

Please … good gracious … spare me the “Trump speaks to the common man” rejoinder.  Indecency and incivility may now be more common than ever before, but the common man doesn’t need to hear stupid to understand American public policy.  Trump fuels anger and frustration, which are the common tools of rubes and radicals who don’t or can’t function productively in a civil society. Ronald Reagan won 49 states, and he spoke directly to the American people with elegance and optimism.

Trump isn’t leading us to a shining city on a hill when he speaks, he is dampening the lamp of liberty and fueling the torches and pitch-forks carried by a population listening to its darker angels.  His Phoenix rally was yet another missed opportunity.

Trump’s nearly 35-minute recitation of his written statements on Charlottesville was incomplete and, mostly, insincere.  Trump’s problem isn’t just that he lies, misleads, and exaggerates, it’s that he is not very convincing when he does it.  Reagan wasn’t great just because of his words, charm, or smile.

In Trump, we hear only a man who is seriously angry about his own image and how he is treated.  He could give a damn about country, party, or the “common man.”  The Trump phenomenon has always been about Trump.  Appealing as a false prophet may be … he is still false.

The success of anger as a motivational tool is depended upon a foil, enemy, or natural foe with whom most can identify.  Enter, the mainstream media, and certain personalities and networks.  CNN is the cable news network, or as some have called it over the years, the Communist News Network, or the Clinton New Network.  CNN is a network, and it does have news, but like all cable news networks, it is an infotainment outlet that has tapped into an angry, clickbait driven, divided society.  In so doing, it has thrown in completely against Mr. Trump.  By doing so, it has lost credibility, and it has given Trump an easy and obvious target among the many Americans who can see, smell, and hear CNN’s obvious bias.

Last night, after Mr. Trump was finished making the American Presidency small again, both MSNBC and FOX NEWS went to taped, pre-speech programing.  Both were equally useless and unwatchable.  CNN was awake … or was it “woke” as the altleft and its loosely affiliated resistance likes to say?

CNN came loaded for bear to “analyze” Trump’s speech.  The panel it assembled was large, and each panelist brought a particular expertise to the discussion.  That is, each brought their rabid, dedicated, unabashed anti-Trump bias and hatred.  Eventually, they brought in a panelist named “Mike” to give one opposing view out of six.  Mike spent most of his limited time trying in vain to reach the infotainment host, Don Lemon about the nature, depth, and insanity of the network’s bias and the panel’s propaganda. 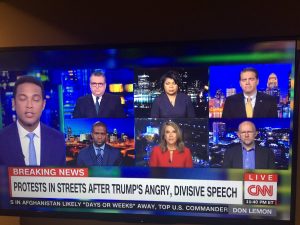 Don Lemon made no effort to analyze the speech.  Instead, he characterized it to fit his view, and he made clear through his comments and questions that he was there to both prosecute and convict the President on his fitness. The CNN fake panel was really nothing more than anti-Trump mouth-pieces.  It included die-hard anti-Trumper Rick Wilson, who has converted his brand from establishment conservative to strictly full time Trump hater. Here’s a typical Wilson tweet on Trump.

The former Director of National Intelligence, James Clapper, was there to add a hue of credibility.  His opinion, of course, is colored by his own anti-Trump bias.  In fact, Clapper is at best an anti-Trumper propagandist with a shaky record of telling the truth under oath about spying on Americans.  At his worst, he is a deep state subversive and professional liar with the skills and means to destabilize our country.  Clapper wondered aloud if Trump was fit, and he then even hinted he was worried about Trump’s access to nuclear codes and the ease at which a President can strike.

That propaganda set-up has been the feature of innumerable major press pieces, talking points, and tweets since the spymaster floated the idea cross CNN’s willing airwaves.

Clapper’s deliberate smear is a calculated effort by the nation’s former head intel officer to destabilize his own government and a President he dislikes. CNN was willing to give him a platform for the smear and a joyful media ran with it … where almost no outlet questioned his background or motives.

As for CNN, there was absolutely no effort to report or analyze Trump’s speech in a way that one might expect from a news network and a panel of “experts.”  The post-speech, Don Lemon, driven panel was a self-fulfilling prophecy of media bias that actually gave credence to Trump’s larger complaint about a “dishonest media.”

Don Lemon is not a serious reporter, analyst, or news person.  He is ill-tempered, inexplicably arrogant, and an agenda driven talk host unconcerned with serious or fair analysis. That’s on his good days. In some respects, most ironically, he is a Donald Trump like figure in infotainment.  He is no part journalist.

This #CNN coverage is so biased right now … it's terrifying. Heck, even as a constant critic of Trump, I am shocked by the smear

In CNN, Trump has found an entity willing to earn his loathing and prove him right.  In Trump, CNN has found a President willing to do and say everything CNN needs to advance its anti-republican junta.  They may be an odd couple, but Trump and CNN thrive for their own purposes when combined.

The problem with all the Trump and CNN drama is it does nothing for America.

CNN can be correct and biased.  Trump can be correct and unfit.  Those truths do not need to live separate and apart.  CNN could have, indeed it should have, pointed out all of the factual issues and problems with Trump’s speech.  It also could have and should have addressed the speech’s tone.  I once called Trump’s inaugurations speech “the thousand points of darkness.”

CNN could have done a tough analysis with a real panel and still had a credible analysis about the parts of the speech that would helped Trump. We got none of that because CNN isn’t news or analysis, it is infotainment.

Trump was right to point out all the statements he made about Charlottesville that rejected racial animus and hate.  He certainly was within his right and privilege to demonstrate how some networks ignored and misrepresented those statements.  However, Trump could have done that with a speech that still stayed on point and worked toward unity.

As I wrote previously, before Trump ever spoke the first time on Charlottesville, there was so much more he could have and should have said.

CNN’s “performance” was embarrassing, but Trump was the bigger offender.

CNN was woeful, biased, predictable, and devoid of any useful insight.  However, it is a for-profit entity with no obligation to be fair and balanced.  It profits from the bias, and it believes the lack of credibility it has is only with those who won’t watch it anyway. Whatever standards of journalism this country once had, CNN does not abide by them, nor must it do so until viewers and market share demand otherwise.

Trump, on the other hand, has an obligation to unite this country.

That is his job.  He can’t choose sides, and this country also can’t be united in darkness. We can’t have a free, even if unfair press, constantly under fire from a petulant president.

In a country where everyone has chosen sides, and each believes it is on the high moral ground, we find ourselves divided by the great wall of political zealotry.  Mr. Trump has an obligation to tear it down.

He seems unable and unwilling to do so, if not completely unaware of the problem.  I’m not CNN, so this is not Fakenews.