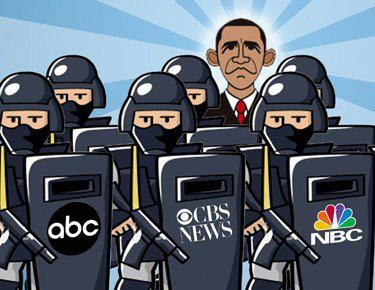 The news media’s coverage of scandalous conduct by Democrats is entirely the reverse. The media routinely serve as protectors of Democrats who engage in corruption.

These and dozens of other instances prove that the establishment news media have long served as a willing sword against Republicans and shield protecting Democrats.

The result of the news media’s protection of Democrat corruption has been that the Democrats have become emboldened in their corrupt conduct. See, for example, the enormous pay-for-play scheme implemented by Bill and Hillary Clinton that made them enormously wealthy and that was only grudgingly covered in the news media – as the Clintons knew would be the case. See Obama’s corrupt use of the IRS to target his political opponents that was all but ignored by the establishment news media – as he knew it would be.

Which brings us to the newest and biggest Democrat corruption scandal yet: Very strong evidence has now emerged that President Obama’s National Security Adviser, Susan Rice, deliberately ordered intelligence agencies to “unmask” (reveal and provide) communications covertly obtained of Donald Trump and his campaign and associates during the campaign and presidential transition. The evidence shows that this illegal surveillance of Trump and his team began before Trump had even become the nominee of his party.

Unlike so many of the so-called “scandals” doggedly reported by the news media on Republicans based on nothing more than accusations by Democrats with no evidence whatsoever, there is very significant evidence of these felonious activities by Ms. Rice and others throughout the Obama administration.

This is potentially the biggest corruption scandal in American history, yet the establishment news media are dutifully and loyally ignoring it.

At least so far.

There have been rare occasions in which the reporting on Democrat scandals by alternative media revealed evidence that was so compelling that the establishment news media could no longer deliberately ignore it without destroying even their pretense of objectivity. They had to cover the story of Clinton’s affair with an intern after the exposé in the Drudge Report went viral. They had to cover Obama’s relationship with Jeremiah Wright when the story continued to gain attention over a period of months of reporting in the alternative media.

The evidence of corruption of the highest order by high-ranking members of the Obama administration is likely to be another story that the establishment news media won’t be able to ignore, no matter how much CNN has announced its intention to do so.

If a president and/or his administration was using national intelligence resources to spy on the campaign of the presidential candidate of the opposite party, he was engaging in corruption so dangerous to our democratic institutions and fundamental liberties that it would constitute literally the biggest corruption scandal in all of American history.

The evidence appears to suggest that this did indeed happen, and at some point, the news media are likely to reach a point of embarrassment for not covering it that they will have to do so, no matter how grudgingly.

When that happens, maybe we’ll find out what Barack Obama knew and when he knew it. We will, however, get to see how the Democrats deal with a major scandal without their loyal establishment news media protecting them. They’re not used to flying without a net.

O’Reilly Had To Go, And That’s No Spin