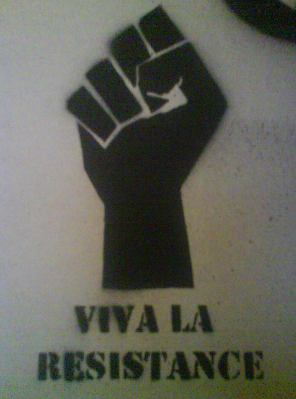 Editor’s Note:  In an effort to be fair and balanced, Committed Conservative has embedded a left-wing correspondent deep within the American Resistance to report on their courageous struggle to liberate America from the oppression of President Trump and the Republican Congress.  This is the first in an ongoing series of reports from inside the Resistance. Some names, including that of our correspondent, and other minor details have been changed to protect the identity of our correspondent. These reports are otherwise unedited.

When I was approached to join and report from with the Resistance, I jumped at the opportunity. I had been sitting in my parents’ basement day after day helplessly watching as Donald Trump and the Republicans occupied our country, and now I had a chance to fight back.

The first thing I had to figure out was how to join the Resistance. Fortunately, the answer presented itself to me before I had to leave my parents’ house. One day as I was reading Facebook, catching up on the news of the world from Mother Jones and The Daily Kos, a manifesto appeared in my news feed. It reviewed how Donald Trump and the Congressional Republicans are Nazis who want to oppress women, Jews, Muslims, blacks, gays, and poor people (as we all unfortunately know) and invited me to add my name to the list of people who pledge to resist. Since every good resistance movement starts with a public declaration of who is participating, I added my name to the list.

Now that I had joined the Resistance, I waited to be contacted with my assignments. I couldn’t wait to find out how I could help with the Struggle. Would I be asked to break some non-privileged non-white inmates out of prison? Maybe I’d be helping bring some new undocumented workers into the country to help our economy? Or perhaps I’d get to help stop “conservatives” (Nazis) from spreading their extremist “views” to young and impressionable college students who aren’t as enlightened as myself?

Days went by, and I began to doubt that anyone was going to contact me. Were they waiting for me to somehow prove my dedication to the Cause?

I realized that I’d have to go find them myself. I’d literally have to leave my parents’ basement and go out into the cold, dark, oppressed world known as the United States of America.

And so I took money out of my college trust account and packed a backpack for my journey. My parents had put that money in my trust account in the naive belief that I should and would use it to go to college. Well, I’d tried that, and at first I even thought it might be useful. The course on White Privilege and the one on Feminist Themes in African-American Women’s Science Fiction showed me how the world really works.

But then they wanted me to take courses in stupid things like algebra and biology and logic. My parents had taken those courses, and where did it get them? I’ll tell you where: A dreary life of going to work to earn a paycheck week after week. They’re now so indoctrinated that they don’t even realize how oppressed they are by a system that forces them to work in order to be paid.

So I took my mom’s Honda Civic (I know, right?) to the airport and bought my ticket to San Francisco. I’d seen on MSNBC all of the freedom fighters at U.C. Berkeley bravely fighting to prevent any non-liberal views from infesting their campus, and Rachel Maddow showed me that that’s where I could gain entry into the Resistance.  I was finally on my way.