It was ironic and jarring to see the party of identity politics, class-warfare, and anti-white, anti-elitism put forth a young Congressmen who is, by the party’s doctrine and dogma, the essence of so-called “white privilege.” It likely never occurred to Democrats that in Kennedy the party embraces the white privilege it usually denounces.

Of course, “white privilege” is the catnip of fools, haters, and racists.

The term and concept of white privilege are racist, and they are a product of anti-American, altleft, faux-intellectualism. Still, it is the one of the pillars of the new radical left, democratic party … whose principles include the notion that wealthy white people are destroying America unless they are Democrats.

Indeed, how radical has the left become? Apparently, embracing God, family, country, and public service, is now racist and a dangerous form of “Nationalism.” 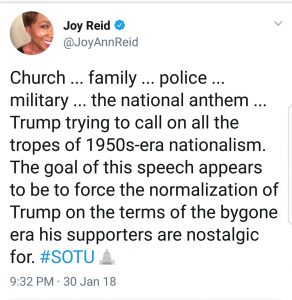 The democratic party in the last two weeks shut-down the American government and its services to 320 million Americans in a gesture of political activism for foreign nationals. If an American were going to err in taking sides, why not err on the side God, family, our military, and our police?  It seems better than erring on the side of foreign nationals over Americans.

The Democratic party has lost its way.

The Democratic party literally no longer represents, as its primary obligation, American citizens. It’s elected members not only break their Constitutional oath in representing the interests of foreigners ahead of Americans, a serious case can be made that the act of shutting down our government for the stated purpose of doing so is treasonous.

The left ran to our courts to convince them that Mr. Trump’s campaign rhetoric was proof that his policies, like the travel ban, were racist and unconstitutional.  Yet, the left actually used its legislative powers to shut down the American government for the stated purpose of demanding legalization of foreign nations.

In a comparison, Mr. Trump has an American First policy and the Democratic Party has a Foreigners First policy. Whatever one may think of Trump’s travel ban, it was designed to protect America and Americans.

As for Mr. Kennedy, I don’t have an ax to grind with the young man. Conservatives don’t blame people born on third-base for being in easy scoring position. We cheer for them and hope to get there too.  Likewise, we don’t find people’s color or wealth to be offensive or disqualifiers.  Nor do we think a family’s prosperity is a sin, let alone an unfair, intuitional advantage.

Kennedy is 37 and has served in Congress for six years.  His substantive experience is being a Kennedy and going to Harvard Law School.  He is white, wealthy, uber-connected, and a part of a bye-gone era of elitism among the Democratic Party’s most white, elite, wealthy, and privileged family.

However, we can’t help but notice that the charge the left makes against white, wealthy, connected, republicans is that they evil, racist, nationalists, or greedy corporate opportunists. The loud ring noise one hears is the clang of hypocrisy.

Mr. Kennedy did a capable job in his speaking performance, and the Party, other than placing a Kennedy in front of a car, did a great job of stage-craft with a live audience. Mr. Kennedy gets a solid A- on style and an F on substance.

His dark, dystopian view of the current state of America knows no basis in fact.  Moreover, Mr. Kennedy knows little of the struggles of everyday Americans.  The deep division of which he speaks comes not from policies that pit Americans against each other … it comes from divisive, race-based, identity-obsessed, political talking points designed to consolidate party power.

Both political parties have failed this country because they are built and designed to put the power of the party ahead of service to the people. The Democratic Party’s failures are more pronounced, as they serve dis-unite us.

The Democrats, in the name of diversity, have been trying to rip America apart by race, color, creed, and orientation for decades. Mr. Kennedy offers them the same snake-oil prescription for those afflicted by the reality of liberty.

Mr. Kennedy assures democrats that the failure of any American is the fault of other Americans, particularly white, wealthy, privileged, people … who of course are not like him.

In traveling back in time to embrace a “white privilege” holder as their messenger, the Democratic party traverses a dangerous, dimly-lit bridge to its past … and does so riding as passengers with a Kennedy at the wheel.

The early result is that the party is drowning in hypocrisy.