“Give me your tired, your poor, your huddled masses yearning to breathe free”

The above sentiment is a line in poem.  It is not official US policy, nor is it law.

In law school, I once eagerly questioned Justice Scalia about the “right to life” in the Declaration of Independence.   As a young conservative, would-be lawyer, I thought, “wow, I have an argument.”  After all, isn’t the Declaration of Independence, a founding document, and a cherished bulwark of our country, prima facia proof of the legislative intent that Americans have  … above all else …  “a right to life?”

The Justice could sense the satisfaction I had with myself.  He tilted his head, gave his famous smile, and with a perfectly timed, pregnant pause … delivered one of the best Scaliaisms ever uttered.  It’s a shame our law school publication, which I ran, didn’t have more than a 300 person readership. Scalia said,

“The Declaration of Independence is a wonderful puff piece, but it’s not the law.”

The poem of a sugar heiress and refugee advocate inscribed in the Statue of Liberty certainly evokes the concept of liberty for which America stands.  And, at the time of deliverance, we were essentially an open borders country.  Many of our frontiers were not yet fully developed.  However, we are, if nothing else, a country of laws.  Those laws are made by and for the people. Which people?

The people for whom Americans make our laws … are our American citizens.

As I pointed out previously, many liberals often like to say that “we are all immigrants.”  Some even pass around a meme of an Indian chief that says something clever, like, “As far as I am concerned, you are all illegal.”  I call that, Chief stupid Meme. Here he is below. 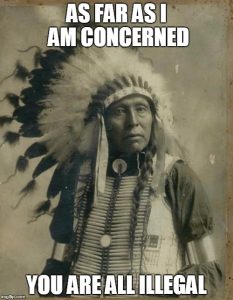 In reality, failing to secure one’s borders and establish a sensible immigration policy is a recipe for national suicide.  That’s a reality the American Indian knows better than some lazy thinkers.

Mr. Trump has proposed immigration changes.  I don’t love them.  However, making immigration policy is a legislative function, and the conversation must include all American citizens.  We are the stake-holders.  Non Americans are nothing more than incidental beneficiaries of our policies.

No one has a right to immigrate to the United States.

If I had my way, “immigration reform” would look much different than the Trump proposal.  It would be profoundly tougher on future illegal immigrants and those who encourage them, and it would eliminate all the incentives for coming and staying here illegally. I would attack any institutions or entities that attempt to reward illegal aliens.

Moreover, a responsible immigration policy would look at our changing world dynamics, and it would be far more diligent about security threats.  We would be, as I have written previously, far more discriminating … in the proper sense of the word.

My policy would be very different too … in that mine would seek to increase legal immigration, which is an essential ingredient to the recipe of our success.  However, that ingredient should make America stronger, smarter, more competitive, and more economically and intellectually competitive.  We should be adding people to America who love liberty, appreciate our system of government, and add value to our country.

The phony outrage kicked off when anti-Trump, democratic activist Jim Acosta made himself, again, the news at a White House Press conference, demonstrates the fundamental ignorance of many Americans about current immigration law, and the purpose of immigration.  Mr. Acosta, CNN’s White House correspondent, seems often to run afoul of the first principle of journalism, which is that a journalist reports and analyzes the news.  He or she does not attempt to make or become the news. Ironically, for that reason, he gives credence to the charge that CNN is putting the fake in real news.

Mr. Acosta … sir … the poem, The New Colossus, is not law.  It’s a great puff piece.  It’s an ideal.  Around that ideal, we build laws that help to bring these grand notions into reality … in a manner that is best for the American people.

Whatever benefits … real, amazing, or incidental …  prospective immigrants get by meeting our lawful immigration requirements, those are all secondary to a policy and law that attempts to ensure, as best we can, that new immigrants are a benefit to existing Americans.

Know this America; we already have immigration requirements, and they include the ability to write and speak English.

If we are telling the truth, then we must be truthful and say that our government has watered down these legal immigration requirements.  It has not done so based on legislation or the will of the people.  It has done so through the administrative and deep-state.  In most cases, agencies have glossed over requirements to make immigration easier.

We didn’t do that.  Congress didn’t do that.  Bureaucrats have done that.  Agencies to which Congress has effectively delegated its authority have used rule-making, Chevron and Auer deference to interpret these requirements in a way that favors immigrants over the needs of America.  All of that needs to change, and all these procedures and requirements need to be part of real, comprehensive immigration reform.

Most readers don’t click through my links.  It’s ok, I get it.  Even those who do click through, have no way of knowing my nearly 25 year fight in this battle to contain an illegal invasion.  How could they.  No one, except my mom, has likely read the dozens and dozens of pieces I have written on this subject from since 1992.

One theme of mine has always remained constant.  I support vigorous, lawful immigration to this country.  In so doing, I vigorously oppose any illegal immigration.  I oppose conflating the two, and I vehemently oppose people suggesting that those of us who will not turn a blind-eye to the exploitation of illegal aliens for business or political purposes are somehow racists.  Of course, we are not.

President Trump’s initial foray into this immigration discussion re-starts the conversation.  However, any notion that we can suppress the urge, desire, and need for liberty by curbing legal immigration is unsound and irresponsible.  Moreover, curbs on legal immigration result in a black market for, and increase in illegal immigration. Those are facts.

Immigrants who bring skills to this country, who embrace liberty and the principle of our republic, ought to be welcomed with open arms. Behind that proposition, all Americans should stand.

As for the Mr. Acosta’s of the world, please, give us no more of your tiresome, rich, activists, yearning to be the news.

Immigration law … it’s for America and her Americans.