Voters actually living and voting in Georgia’s 6th Congressional District dealt Anti-American fascist fighters and the fools that follow them in the #altleft Resistance movement a mortal blow last night.

Targeted for defeat by a national movement, Republican Karen Handel won easily over Jon Ossoff, the hand-picked, progressive liberal who lived outside the district and who received a staggering 97% of his contributions from outside the district. Polls had Ossoff with leads from 2-5 points.  After Ossoff spent nearly 30 million dollars, Handel carried the suburban district much more strongly than did President Trump in 2016. The resistance loses again, and Americans should celebrate that the resistance is futile. 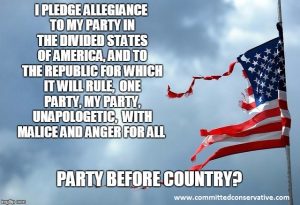 By embracing the resistance, the Democratic Party and its media arm have become both loud and irrelevant.

The results of the Georgia special election are a lesson that neither side will learn.  Trumpers will hail this as a victory for the President.  It wasn’t.  Handel outperformed President Trump, but she under-performed the district, which is R+8.  Secretary Price last won by 22% and in a special election in an R+8 district, a 3.7 margin of victory is hardly a republican party endorsement.

In reality, Georgians stepped up and rejected an angry, bitter, vicious outsider movement with national money and a carpet-bagging, clown candidate.

Those not in the resistance are either sexist, Islamophobia, homophobic, racist, misogynistic, and greedy.   They are the party of labels. Right now, “progressivism” isn’t progress.  It is a movement based solely on opposition to everything and everyone who is not with them.

Both parties are part of our collective American problem. Those pulled into the right/left, red/blue game are being used by parties whose primary purpose is the survival of the party, not service to the people.

The disorders and miseries which result gradually incline the minds of men to seek security and repose in the absolute power of an individual; and sooner or later, the chief of some prevailing faction, more able or more fortunate than his competitors, turns this disposition to the purposes of his own elevation, on the ruins of public liberty.

Reagan once won the two largest landslides in American history.  He did so based on optimism, love of country, and the embrace of liberty and free markets. Neither party has any idea what that is … but it is the Democratic Party and its resistance that sells the polar opposite of Reagan’s optimism. That is why they will keep losing.

The resistance is lost.  Impeachment was a lie.  The coup has failed. Trump will be President until at least January of 2021, and if the resistance continues, probably longer.

The Resistance and its party give Americans nothing for which they can vote.  They are opposed to free speech.  They are opposed to profits and free markets.  They hate the police. They raise illegal immigrants over US citizens.  They are obsessed not merely with gender, but with creating genders.  They mock patriotism.  They burn our flags, riot in our streets, and stand screaming obscenities at us and our children when we dare not follow them.  In their worst, most virulent form, the resistance is targeting political enemies for actual assassination. Then, they blame the guns.

Readers of our site and my work know that I was not a Trump fan or supporter.  I still criticize him heavily, and repeatedly … when he is wrong.  Ironically, Trump’s success comes from the lack of alternatives offered by an angry, tired, clueless left-wing with whom few decent people want to associate.

For those who wonder how Trump won, or how the Republicans keep winning … the answer is that as bad as they may be, the Resistance offers only #resistance … and #resistance to American ideals, exceptionalism, and optimism, are a losing strategy.  Your #resistance is futile.