Do you know who is really responsible for the Rockville rape?  It’s the rapist.  Don’t get distracted or intellectually lazy by falling for false political commentary.  Criminals engaged in heinous crimes bear all of the responsibility for those crimes.  Should a jury find this to be the graphic, brutal, inhuman rape that has been described, the State of Maryland does not have a sufficient penalty on the books for the monster or monsters who committed these acts.  The rapist(s) deserve the maximum penalty.

Convicting criminals on evidence is what our legal system does, and I have faith in that system.  Nonetheless, we do have to examine who is responsible for the conditions and circumstances that made this rape possible.  Those responsible include Congress, the Supreme Court, several Presidents, you, me, and all of us.

Take a look in the mirror America.  You let 10’s of millions of illegal aliens come here.  That’s on you.

Illegal aliens enter our country at will.  The Supreme Court gave them access to our schools.  Presidents have encouraged them to come here in violation of the law.  Lawyers, legal groups, open-borders advocates, social justice warriors, and even churches have all called for Americans to permit illegal aliens to come and or stay in our country.  Come and stay they have … in the millions.

It’s more than ironic that even democrats agree that foreign nationals coming as “refugees” should undergo some vetting.  Yet, when 20-30 million people from multiple countries cross our border and enter America with impunity, no one thinks vetting is necessary.  In fact, your Supreme Court thinks it is actually un-Constitutional for a public school, funded by the American public, to ask that a child enrolled therein prove that he or she is from this country.  Un-Bleeping-Constitutional!

You want to know how Trump won?  That’s exhibit A.

Read the Facebook posts and tweets about the horrific Rockville rape.  You will see raw emotion, anger, vitriol, and yes, ignorance.  Americans are pouring out decades of frustration over illegal immigration.  It’s not pretty.  But the anger is pretty damned predictable. 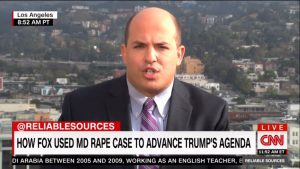 Some media outlets have nearly blacked-out news coverage.  Not surprisingly, CNN covers the Rockville rape story suggesting that other networks who are covering the story are doing it to sensationalize the news or for nefarious, race-based reasons.  I suppose the accused Rockville rapist should thank God he is not a Lacrosse player from Duke, lest CNN really cover the story.

Many internet posters write in complete disbelief asking why the illegal aliens are in the school, why 18 year-old men are enrolled as freshmen, and why, when arrested, these accused foreign nationals receive state-funded and constitutionally mandated legal help.  Most Americans sense of these injustices is dead right.  It makes no sense, not one single bit of it.  However, this is the reality we created through a series of legal decisions, apathy, and decades of Americans refusing to enforce our laws at the behest of special interests.

Real Americans have had enough.

I know what the case law says … I merely tell you that it is wrong.  It’s baseless.  It’s extra-Constitutional.  No one ever intended that people here illegally, without our permission and in violation of our laws, be afforded the rights of our Constitution.  There is no equal protect clause argument that fits that false narrative.  Foreign nationals are entitled to due process granted them under various treaties, that’s it.  The rest is, as the fictional Vincente Gambini said in My Cousin Vinny, “bullshit.”

People who tell you foreign nationals have Constitutional rights … well in my neighborhood growing up … we might have said to someone humping that line, “You don’t know d*%K about F@ck!”   Americans don’t need a lawyer to tell them what the Constitution says and to whom it applies.  The Constitution wasn’t written for lawyers, but it has been re-written, mangled, and manipulated by them.

There is no precept of law that rewards law breaking with additional rights.  None.  Nor does our Constitution convert illegal invaders into people who now hold American rights.

No justice will ever make whole the poor girl beaten and raped in that high school bathroom allegedly by the accused, adult, foreign national male.  None.  Only a lifetime of support will ever help that girl come to grips with man’s inhumanity toward her.

The Rockville rape case, however, is a clarion call to end the unchecked, unabated, illegal invasion of this country by foreign nationals.

We are uninterested in their motives of illegal aliens coming here, and we are unmoved by their personal stories.  This country has a process for legal immigration, and only through that process are we interested in the motives, stories, and skills of immigrants we gladly welcome legally.  Legal immigrants are the only “immigrants” who earn our respect and admiration, and who have the right to try to apply for and earn citizenship.

George Bush once said, “you are either with us, or you are with the terrorists.”

Americans must say now, “you are either with us, or you are with the illegal aliens.”

If you are with illegal aliens and you harbor or induce them to enter or stay here, we should draw no distinction between your criminal motives and your criminal acts.  It is time to indict and aggressively pursue all people involved in the illegal alien exploitation that is destroying America … and in the very real case of many … destroying real, pure, innocent, American lives.

This returns me to the critical issue at hand.  Yes, the criminal justice system will ferret out the facts of the Rockville rape and hand out the best justice we can have in such a circumstance.  But, it is up to us, Americans, of every stripe to do our jobs.  We can no longer excuse, turn a blind eye, or try to convert stories of honorable illegal aliens into a rational basis to permit the invasion to continue.

We must shun, shame, expose, and ridicule illegal alien apologists.

We do not have to be anti-immigrant to be anti-illegal immigrant.  It is time, today, and for eternity, to demand action on illegal immigration and to require our servants to enforce our laws, secure our borders, remove criminal aliens, and prosecute those who harbor them.  We must be united in this effort.

Americans can no longer give sanctuary to illegal aliens or their criminal conspirators.