How did it ever come to this?  I was once a loud, strong, and unapologetic advocate for stopping candidate Trump.  As a conservative, I even found that I could not support him in the general election. I wanted Mattis.  As Russia and wiretaps dominate the “news,” my legal radar is pinging.  Thanks to the media, the deep state and the shadow government, I have become the reluctant Trump defender.

My opposition to Trump is on style, candor, and policy.  Once elected, I vowed to work to move Trump in a conservative direction as any responsible, committed conservative would do. Of course, I have also taken him to task when he has strayed from conservative principles and presidential decency.  That’s what real conservatives do.

Post-election, anti-Trump conservatives are really people whose bruised egos supplant their optimistic conservative principles.   Still, my opposition to Trump both pre- and post- election drives my pro-Trump friends crazy.  And when I defend him, my liberal friends scream, “We knew you were a Trumper!”  No, I am a responsible conservative American.

I won’t ever defend everything Mr. Trump does.  I don’t believe in blind adoration, and I hope no else does either.

Increasingly, however, I find myself defending Mr. Trump.  It’s not because I have jumped on the Trump train.  I’m on America’s train.  I’d like to think I am not a free rider either.  Rather, I am working on the railroad … all the live long day.  Sometimes I fuel the engine, sometimes I grease the wheels, and sometimes I will pull the emergency cord if it looks like a crash is imminent. I don’t drive the Trump train.  I am not cheering it, nor am I planning to dynamite the tracks.

With the war on Trump, it is hard not to a Trump defender given the forces of #resistance aligned against him.  One would have to be naive to ignore the calculated and coordinated effort to delegitimize and bring down this President.  It’s an organized coup.  The left has well-funded the #resistance.  It has an established leadership, and it is taking experienced direction.  Former Obama officials are seemingly now issuing a call to street action, like Loretta Lynch did overnight in this bizarre video.  The #resistance headquarters is now in Mr. Obama’s house, just miles from the White House.  How many ex-Presidents move a few miles away and then move into their home their chief political strategist?  The answer rhymes with liro.

Mr. Trump alleges that Mr. Obama used illegal wiretaps on his phones just prior to the election.  That’s a very serious accusation, and given Trump’s strained and distant relationship to truth, it is an accusation of which we are right to be skeptical. Nonetheless, the issue must be resolved.

How low has President Obama gone to tapp my phones during the very sacred election process. This is Nixon/Watergate. Bad (or sick) guy!

If Mr. Obama had those phones tapped, or used other types of electronic surveillance without rock-solid legal cause, that is worthy of investigation.  As Jake Tapper at CNN said, it would be a Huge Story.  Though Tapper claims, inexplicably, that there is no proof of wiretaps against Trump.  As set forth below, Tapper seems to draw a distinction between wiretaps associated with an investigation of Trump and his circle, and Trump’s precise twitter allegation.  It’s clear, however, someone was listening to Trump circle, if not Trump himself.

Obviously FBI/DOJ wiretap of POTUS would be HUGE story. One illegally ordered by previous POTUS even bigger. BUT WH officials have no proof

We now know from the public record that the Justice Department sought wiretapping rights against either Trump, his campaign, advisers, or associates related to purported Russian ties. As it turns out Obama’s Justice Department, coincidentally sought broad FISA warrant for wiretapping Trump himself and his associates not long after the famous Lynch and Bill Clinton tarmac meeting, according to sources.

Right after that “chance” encounter between and ex-president and the woman leading the investigation into his wife’s criminal wrongdoing, the FBI director declared that Mrs. Clinton violated the statute on handling classified material and then said it wouldn’t prosecute her for it.  Coincidences abound.

The FISA Court denied that initial wiretap request according to intel sources.

If you are a liberal democrat, you have the luxury of relying on Mr. Obama’s strong denial of any involvement in “ordering” wiretapping.  Liberal and the MSM are all adopting the same defense of Mr. Obama.  It’s similar to when the disbarred, perjurer and former President Bill Clinton wagged his finger at America and said, “I did not have sexual relations with that woman … Monica Lewinsky.”  The defense was technically true, from a biblical sense.

Never mind that Ms. Lewinsky performed oral sex on him while he while he discussed state business on the phone, or that in an act of wanton debauchery, he once took a cigar he was smoking, put it in Ms. Lewinsky’s vagina, removed it, took a drag, and said, “that tastes good.”

But, he did not have sexual relations with her. The “technicality’ defense is the now the Obama defense … minus the cigars, we hope.

Mr. Obama didn’t “order” wiretapping on Mr. Trump.  His administration sought that, and I am sure he knew about it, if not directed that it be done.  Likewise, no President has the authority to “order” wiretapping.  That’s the job of the FISA court. That rock-solid denial of the former President is actually quite limp.  However, the media and the left have the same talking points, “there is no evidence of any kind that President Obama ‘ordered’ Trump’s phones tapped.”  Technically, there never will be.

We also now know that in October of 2016, weeks before the election, with Trump seemingly still alive, Obama’s DOJ redrew its warrant request more narrowly and went back to the FISA court and got permission for some wiretaps.  Intelligence sources are saying that those wiretaps turned up nothing, as reported in both the Washington Post and New York Times. 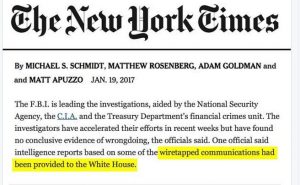 The January 19, 2017 New York Times piece makes clear that the Obama administration, and multiple agencies, were scrambling to tie Trump and his campaign to Russia, with no success.  I’d sure like to see that FBI affidavit and I’d love to depose everyone associated with the original and subsequent requests.  If you want to know who “ordered” these investigative actions, why, and with whom they spoke … put them all under oath.

Now is the time to appoint a special prosecutor to get to the bottom of every component of the FBI’s activities related to Mrs. Clinton, the Trump wiretaps, and the possibility that presidential power was used for political purposes in directing the nation’s chief law enforcement agency to essentially bury and destroy a political opponent.  As Robert Barnes points out:

If an outgoing President ordered wiretapping on the man he worked to defeat, it’s a scary and dangerous precedent.  It is particularly scary if the basis for the wiretaps is flimsy, purely partisan, or perhaps illegal.

The Obama administration had no qualms about ignoring the law when it was in control.  No one was going to prosecute political friends though it had ample opportunity.   Not only did Mr. Obama control his appointees, but leftism is a cultural rite of passage in many agencies of the deep state.  The bureaucrats often are part of the Obamanation and the war on Trump.

A special prosecutor can answer many questions on this matter, about Mr. Obama and Mr. Trump.

President Trump cannot hide behind these tweeted allegations themselves.  He controls the government, and therefore he can divulge which agency sought such a warrant and why.  Of course, to do so, he must divulge the why.  So, Mr. Trump seems to have painted himself into a corner, with oil based paint on a hot humid day.  He is not getting out of this accusation without some of that paint stuck to him. Here’s the rub; if the basis for the warrants have merit, than a special prosecutor is indeed necessary … not just to investigate Mr. Obama, but to get to the bottom of this Russian-Trump alleged conspiracy.

For months, the #altleft has sought a scandal worthy of a special prosecutor.  Now, it has one. The former President sought a FISA warrant against the current President and the Court rebuked him.  His administration returned with a narrower request in the month before the election, and there surveillance found nothing.  Was it ever even warranted?

It appears there was no reasonable suspicion to support a possible crime by Mr. Trump, his campaign, or former associates.  Only 12 FISA warrants were rejected out of over 35,000 applications from 1979 to 2013.  Now the question, properly asked is, was this an abuse of power and also a crime?  When you wish for special prosecutor, be careful for what you wish. 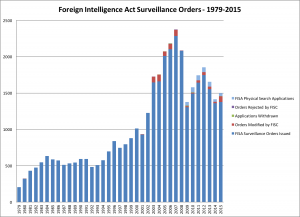 As I sit back and examine all that took place since Mr. Trump’s improbable win, it is hard not recognize the coordinated effort to take down a duly elected President.  Riots, protests, administrative backlash and slow rolling, and a hostile press almost makes Trump a sympathetic figure.  That’s not easy to do.

Moreover, incidents like the #fakenews surrounding the Session lie rouse my fundamental and legal sense of fairness and justice.

This country is on the wrong track … and it seems like those free-riders on the underground Obama railroad will fight to the end to stop this President, by any means necessary.  This, I will not support.  So, when I rise to defend Mr. Trump, it’s not because I ride on his train; it is because I own the railroad, and this is my country.

We are a nation of laws, and we must defend those laws without regard to politics … lest our manifest destiny is to become the world’s most dangerous banana republic.

The Obama administration went to the FISA court to convince a special judge that Mr. Trump and his campaign presented a national security danger to America.  Maybe they were right, and maybe they were abusing power.  If a court issued wiretaps and electronic surveillance, then let’s get a special prosecutor to investigate the truth of the allegations and the basis and timing of the administration’s attack on Trump.