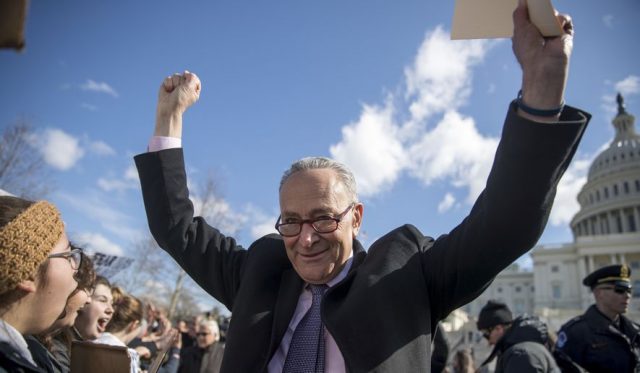 The $1.3 trillion spending bill passed this week by a Congress with Republican majorities in both houses and signed into law by a Republican president proved that it is the Democrats who are actually in control.

I was a Republican activist for nearly 30 years before finally recognizing last year that the party no longer represented my conservative values and principles and had left me.

After promising for a decade to repeal Obamacare, the Republicans refused to do so when they controlled every lever of government. After promising to defund Planned Parenthood and build a border wall and end massive budget deficits, they refused to do any of those things once they had the chance.

In fact, last year the Republican Congress passed exactly one – and only one – bill that was specifically conservative and opposed by the Democrats: They passed a tax reduction bill. But even there, they made no effort whatsoever to simplify the tax code as they had promised to do for decades.

But even if the Republicans would refuse to follow through on pursuing a conservative agenda, at least if they were in control of Congress, the Democrats would not be able to advance their leftist agenda, right?

Today President Trump signed into law a massive spending bill that Chuck Schumer and Nancy Pelosi immediately celebrated as victories for the Democrat Party. Schumer crowed in a press conference that the bill “brings the era of austerity to an unceremonious end.” In other words, the Republicans had now fully and finally capitulated to the Democrats’ absolute opposition to any fiscal restraint.

The Republican leadership waited until the day before the deadline to avoid a government shut-down so that failure to pass the bill would have catastrophic consequences. Then they foisted on their members a bill that was 2,232 pages long and gave them 16 hours to read it before voting on it. In doing so, they violated yet another promise – that they would always provide at least three days to review a bill before bringing it up for a vote.

And in this manner the Republicans passed the second largest spending bill in the history of the human race. And in that bill they once again broke their promise to defund Planned Parenthood, giving them over $500 million to continue to slaughter babies and then sell their body parts and to continue using taxpayer funds to campaign against Republicans and pro-life organizations.

You can’t make this stuff up.

President Trump immediately expressed his disdain for the bill, but not because of the gargantuan amount of spending in it but rather because, in his view, it didn’t spend enough money.

And none of them stopped for even a second to consider the grotesque immorality of continuing to steal trillions of dollars from our kids so we can live large today. I mean, it’s not like today’s Congress and president are answerable to the people who will have to pay off this horrendous debt in the future.