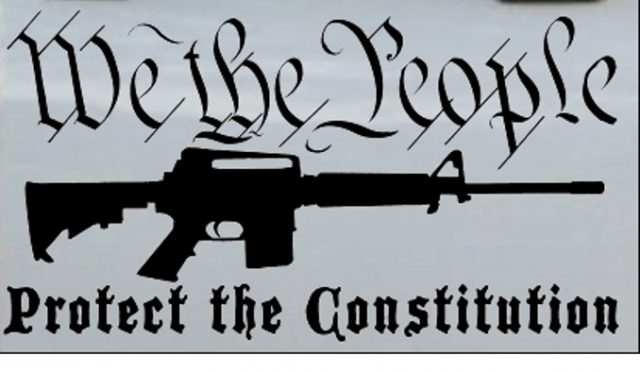 That title is not a joke. There is a serious Constitutional argument that the government should buy you a weapon if you cannot afford one on your own. In fact, of all the rights people demand or claim they have, none are superior to the individual right of Americans to keep and bear arms.

Remember Sandra Fluke?  She thought she had a “right” as a 30-year-old woman to have the government either pay or force others to pay for her birth control.

Other radical leftists argue that everyone has a right to “healthcare,” which they sometimes insist must be “free.”  Student’s demand that their education now be “free.”  In fact, the government does guarantee a subsidized student loan for students. It’s your money and their education.  You won’t read that in the Constitution.

The government gives Planned “Parenthood” over $500,000.000 in payments for its services, which may not go “directly” to providing the so-called Constitutional right to abortion, but, abortion mills get the money and money is fungible.

People are certain they have all kinds of rights. They do. Unfortunately, many people confuse the individual rights we were born with and guaranteed us by the Constitution with obligations of someone else to sponsor and or pay for those rights.  Those are two entirely different concepts.

Our collective “rights confusion” stems from a cultural liberalism and the rise of the entitlement culture. In short, some people in this country think their needs and wants become rights, and those rights become collective obligations.

In fact, there is a far greater legal and logical argument that supports this concept than arguments advanced by many on the left for the purchase and subsidy of their purported rights.

Every American in this country knows that when arrested, Americans are read their rights. That Miranda warning does not exist in the Constitution.  The Supreme Court made it up. The  Court created that right to ensure that we maintain and are made aware of our Constitutional right to be free from self-incrimination. The warning reminds the detainee or arrestee and giving that warning places the additional investigative burden on the State, which has superior power over the individual.

The Miranda warning doesn’t “cost” Americans anything.  It is the price the government must pay to secure our rights so that the government cannot use the power of the state against us.

Americans also know that if they can’t afford a lawyer, the government pays for their counsel.  So, you have the Constitutional right to defend yourself against charges by the state, and the mandate that the state pay for your lawyer to defend you against it if you can’t pay yourself.

The cost of the right to counsel is enormous. In 1986 the estimated cost for all states to provide counsel to indigent defendants was just under $1 billion.  By 2008, that cost exploded to $5.3 billion according to a comprehensive study by the Center for Justice, Law and Society at George Mason.

The Sixth Amendment right to assistance of counsel says nothing about the government’s mandate to provide that counsel to you.  However, the Supreme Court read into the Amendment that “government obligation” to pay for counsel based upon several Supreme Court cases, most famously Gideon v. Wainwright.

To protect you from imprisonment by the State, the State has held that your Sixth Amendment right to counsel includes “free” counsel if you can’t pay for it. For the liberals among us, the word “free” keeps showing up in quotes here because nothing is free.  Someone pays.  When the government pays, that means you and I pay.

The left often demands redistribution from others to them to pay for things to which think they are entitled. In truth, the Supreme Court imposes a cost on Americans to ensure the protection of some explicitly stated, Constitutional rights. In fact, the Court goes even further and expands those rights from the Bill of Rights to include that obligation to pay even when the Amendment itself says nothing about who pays.

Moreover, other “found” Constitutional rights, such as “abortion,” get subsidized indirectly by taxpayers through payments to primary providers for other services.

The right to keep and bear arms is an individual right in the Bill of Rights.

The Second Amendment has always been an individual right. Its purpose is to permit the individual to protect himself, his family, and the free state from others, including a tyrannical government.

The right to protect one’s liberty and security is the ultimate Constitutional right, and the right to do so from a state that might infringe on that right is an explicit purpose of the Second Amendment.

The correct legal and conservative position, of course, is that your right to counsel, as well as your right to keep and bear arms, is a right you have … and an obligation for which you must pay.

The left has tried to convert the Second Amendment, Bill of Rights discussion into a fight over “gun rights.” These are Constitutional rights … our rights  … and the better argument is that the right should not only be secured, it should, where necessary, be subsidized.

I am happy to accept cash, check, or an EBT card from the government to buy my AR-15.