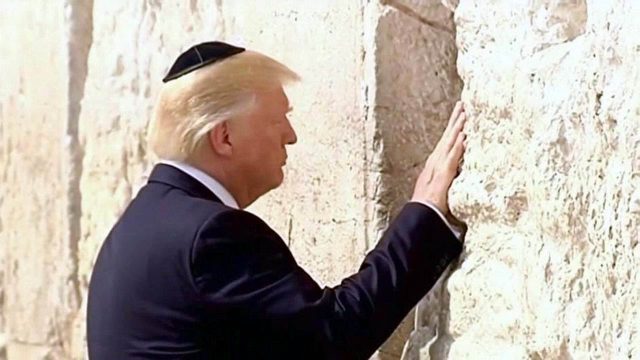 Today Donald Trump made history by formally recognizing the fact that Jerusalem is the capital of Israel, the ancestral homeland of the Jewish people.

Of course, Jerusalem has always been the capital city of the Jewish nation. The Jews founded and built Jerusalem. King Solomon built his temple there, and when it was destroyed, the Jews rebuilt it there.

It was the Jews’ Holy Temple in Jerusalem where, according to the New Testament, Jesus attacked the moneylenders. Why? Because Jesus was a devout Jew, and he was offended that the holiest site in Judaism was being desecrated with activities that had no place in God’s house of worship.

The Romans kicked the Jews out of our homeland in 70 C.E., but we never relinquished our rightful claim to that holy land and, especially, to Jerusalem, our holiest city. Indeed, for the nearly 2,000 years that the Jews were spread across the Diaspora, we concluded every Passover seder with the prayer, “L’Shanah Haba’ah V’Yerushalaim” – “Next Year in Jerusalem!”

In 1947, after the entire world had sat silently while the Germans tried to eradicate all Jews from the face of the Earth, the world finally recognized Israel once again as the Jewish homeland. That land included Jerusalem – it would have been nonsensical and unacceptable for Jerusalem not be be included in the Jewish state – but the world even then refused to recognize Jerusalem as the capital of that revived Jewish state.

Why? Because for many of the years that the Jews were in exile from our homeland, Muslims had taken control of Jerusalem, and while they were there, they took the opportunity to build Muslim shrines in areas that previously had housed Judaism’s holiest sites. When the Jews returned to our homeland, the Muslims disputed our rightful and historical claims to that land and to our holy sites that predated the founding of Islam by over a thousand years.

And so, the world once again abandoned the Jews and refused to recognize a fact that has been established for nearly three millennia: Jerusalem is and always has been the eternal capital of the Jewish homeland and the Jewish people.

From the beginning, Israel has located its seat of government, the Knesset (legislature), Supreme Court, and various agency headquarters and other governmental buildings in Jerusalem. Nevertheless, every country in the world asserted that the Jewish State does not have the same sovereign right that every single one of those countries has always asserted for themselves to designate her own capital. The nations of the world instead told Israel that her capital is Tel Aviv – a modern city that never existed in biblical times – and every country in the world (that has recognized Israel’s right to exist – many still haven’t) built their embassies in Tel Aviv.

We Jews have a word for such arrogance: Chutzpah.

Well, today that changed. Today, Donald Trump, the President of the United States of America, the most powerful nation the world has ever known, formally recognized that Jerusalem is, in fact, the capital of Israel, and he announced that the U.S. will be moving its embassy there.

Technically, the United States had already taken that position 23 years ago, when Congress passed and President Bill Clinton signed the Jerusalem Embassy Act, which recognized Jerusalem as Israel’s capital and required that the American embassy be moved there. But that legislation also gave the president the authority to waive that requirement (a provision that Clinton insisted be included to avoid his veto), and every president since then has exercised that waiver. So, as a practical matter, that legislation supposedly recognizing Jerusalem was actually a meaningless piece of political fluffery.

The world’s response was the same as it always is when the United States supports the Jewish State: They yelled, screamed, cried, threatened violence, and predicted the Apocalypse.

Germany was one of the first countries to come out against Trump’s action. Germany. Think about that: The country that just 75 years ago dedicated itself to murdering every single Jew on the planet and that succeeded in killing one-third of our entire population thinks it is entitled to oppose the recognition of Jerusalem as our historical capital.

No, Germany. You don’t get an opinion on this. If you can’t support the people you recently tried to exterminate, then shut the f*ck up and go back to enjoying your own judenfrei country.

British Prime Minister Theresa May also condemned Trump’s action. She made her announcement from London, the city that the British people have for centuries designated as their historical capital. (For some reason, the world has never insisted that the “real” capital of England is Liverpool.) But, unsurprisingly, Britain continues to deny the Jews that same sovereign right.

Pope Francis also announced his opposition to Trump’s announcement. Forgetting that his job is to be the spiritual leader of the Catholic Church, he instead asserted his leftist anti-Israel political views and, in so doing, associated himself with his church’s centuries of history of persecuting the Jews and denying us our dignity and human rights.

Perhaps the most obscene reaction, though, came from the U.S.’s Union of Reform Judaism, which released a statement opposing Trump’s recognition of Jerusalem as the capital of Israel. The URJ had always previously insisted (correctly) that Jerusalem is the capital of Israel and should be so recognized, but today they reversed themselves. Because Trump. The abject hatred of Donald Trump by the left-wing URJ was more important to them than loyalty to our own Jewish heritage.

One of Donald Trump’s strengths is his willingness to do what he believes is right regardless of outside pressure. Back in May, during a visit to Israel, Trump became the first U.S. president ever to visit the Western Wall, the holiest site in modern Judaism. No other president ever did so because it is located in a portion of Jerusalem that the Palestinians claim, without any historical or legal basis, as theirs. Trump shrugged aside international threats and admonitions, made the visit, and showed Israel and the Jewish people a respect that the rest of the world has always denied us.

Regular readers of my columns know that I am not a fan of Donald Trump and that I have been highly critical of his personal conduct, which often is juvenile, crude, embarrassing, and counterproductive. But one thing I have respected about him is his courage. He has been undeterred by opponents ranging from deranged Democrats to a hostile and dishonest “news” media to world leaders that have lost their moral center (if they ever had one).

Only a Donald Trump could have done what he did today. No other president ever had the courage and strength of conviction to do so, and it is doubtful that any of the other candidates in last year’s election would have either.

No, I haven’t suddenly joined the Trump cult. I will still call him out when he behaves inappropriately or counterproductively. But intellectual honesty compels me to express my personal appreciation and admiration for the courage and integrity that Donald Trump displayed today.

And Trump’s boldness will pay dividends. Having now paved the way on this vital issue, other nations of good will are starting to follow. This afternoon, the Czech Republic announced that it too is recognizing Jerusalem as Israel’s capital and will be moving its embassy there. And it appears that the Philippines and other countries may soon follow suit.

So, today I set aside my more typical criticism of President Trump to express my deepest gratitude. Thank you, Mr. President, and God bless you.

Because of your courage, integrity, strength, and friendship, the Jewish people finally truly can say, “Next Year in Jerusalem!”