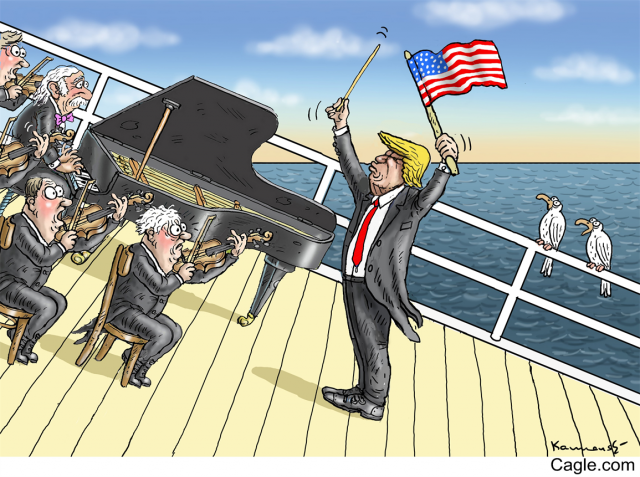 Grab a camera and start taking pictures. We are watching history in the making: We are now witnessing the last days of the Republican Party as a viable national party.

Yesterday’s election was the canary in the coal mine showing just how massive has been the damage to the Republican Party wrought by Donald Trump and his followers. In fact, the damage is so enormous that I believe it is now irreparable.
.
The real news in Virginia yesterday was not the expected Democrat victories in the statewide elections. Everyone knew that the influx of tens of thousands of liberal Democrats into Northern Virginia from the federal government complex gave an almost prohibitive advantage to the Democrats in the statewide elections. As hard as Democrat Ralph Northam tried to lose the election through his incompetent and offensive campaign, his advantage was just too great.
.
No, the real news is what happened outside of Northern Virginia: The Republicans lost 15 seats in the House of Delegates going from a 66-34 seat supermajority to a 51-49 slight majority – and that was only determined after two virtually tied races tilted to the Republicans by a handful of votes. [Note: I originally wrote that the Republicans had “probably lost their majority” based on projections at that time. I have now updated it based on the reported outcomes of the two races that I referenced.]
.
In solid-red upper-middle-class suburban Virginia Beach, two Republican incumbents were defeated by openly liberal Democrats, and two more held on to their seats by razor-thin margins. And Virginia Beach went for the Democrats in the statewide races by large margins.
.
Exit polling shows that more than half of the voters in Virginia were sending a message about Trump, and 2/3 of them were sending a message of opposition to him. One out of every three voters in Virginia showed up to vote against Donald Trump by proxy by voting against his party. And Democrat turnout vastly exceeded the Republicans’ because Trump highly motivated them to show up to oppose him and his party.
.
The response by Trump and his followers was that the Republicans didn’t align themselves closely enough with him. I know, right?
.
Okay, obviously this is an absurd and laughable statement to everyone who is not a fully-indoctrinated Trump drone, but sadly the Republican base now consists primarily of Trump drones, mainstream conservatives mostly having been expelled.
.
So, with the Republican Trump cult’s heads planted firmly in the sand, next year is going to be an even bigger rout of the Republicans. MUCH bigger. The Republicans are going to lose a MASSIVE amount of seats in the House of Representatives and will only hold on to the Senate because of the overwhelmingly favorable election map for that year.
.
Trump and his base of disciples will respond to this second rout by once again blaming everyone but Trump and once again claiming that the only path to victory is to follow Trump in lock-step. And so, in 2020 the Republicans will lose the Senate and the presidency in 2020.
And they will never return to power.
The damage to the Republican brand done by Donald Trump and his cult is so severe that it is irreparable. And so, the Republican Party is now a dead man walking. It is no longer viable as a national party.
.
Like I said, grab your cameras and take lots of pictures to show your grandkids. This is the last time that our country will ever have a Republican president or Republican majorities in Congress.
.
In the coming years, the Republican Party will fade away. It will follow in wake of the Federalists and Whigs as the latest relic of political self-indulgence that turns a blind eye to the values, principles, and sensibilities of the American people.
.
The good news is that a new party will emerge to be the home of the millions of mainstream center-right voters who are currently homeless. Nature and politics both abhor a vacuum. I’m keeping a lookout for the emergence of that new party so I can jump aboard and do my part to help it succeed.
.
The Republican Party is a lost cause, and I’m done trying to reason with the Trump cultists who have destroyed it. There is no reasoning with them. If the Trump drones had been on the Titanic, after the ship hit the iceberg they’d be insisting that the only way to save the ship is to widen the hole in the hull, and they’d be throwing overboard everyone who was trying to seal it.
.
The Trump cultists are infatuated with Trump because of the mesmerizing reality show entertainment he’s giving them. Now that I’ve accepted that the Republican Party is beyond saving, I think I’ll grab some popcorn and try to enjoy the show too.
.
UPDATE to further clarify why I see the Republican Party coming to an end and a new center-right party emerging: The difference between our 2-party system and the European multi-party model is that they form coalitions after elections to form governing majorities, while we form our coalitions before elections. Both major parties are actually coalitions of similar but not identical interests. What has now changed is that the Republicans are purging the party of traditional conservatives and transforming it into a much more narrow nationalist party. Once the Republican Party is no longer a coalition, it will not have the numbers to win elections. That’s why I’m waiting for the inevitable emergence of a new center-right party to replace the Republican Party as a coalition party of the right with the numbers to be able to win elections.
.