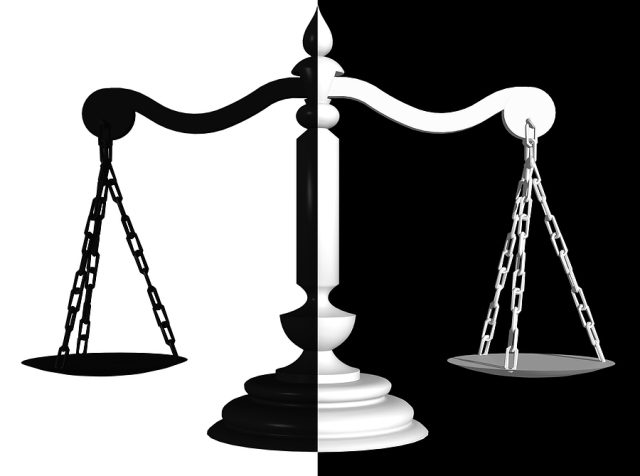 People have relied on the 14th Amendment to argue and fight for equality across a host of social agenda.  The merit of some of those efforts, of course, is legally and historically dubious.  Nonetheless, if the 14th Amendment provides “equal protection” under the law so that illegal aliens can have a free k-12 education, or that states cannot regulate marriage, it certainly should stand for the proposition for which America passed it.  The 14th Amendment has a long and sordid history, but it Congress passed it passed to ensure racial equality … and equal treatment under the law for people of all races.

The equal protection clause of the 14th Amendment does not serve to make some people “more equal.”

On its face, affirmative action programs seek to inject race as “a consideration” in determining a host of actions from federal hiring and contracting, to school admissions, and beyond.  The argument, of which I am well aware, is that past historical discrimination necessitates this unequal treatment in order to ameliorate the conditions of past discrimination.

No … inequality does not equal equality.

The unquestioned, practical effect of affirmative action is that the government permits itself and others to use race to treat people unequally, even if by a smidgen.   Anyone who defends this idea doesn’t have a basic, baseline, rudimentary understanding of equality under the law.

God, nature, DNA, and even one’s upbringing may make us all … individually … different and unequal in abilities, capabilities, stature, intelligence, athleticism, charm, wealth, and every conceivable way imaginable.  It is the job of the law, however, to treat us as equal.  Indeed, only under the law can we have legal equality, which is the foundation of civil, democratic, society.

Affirmative action … affirmatively treats us unequally by injecting race … an immutable characteristic … into how our government treats us. It is, on its face, unconstitutional.

Justice is equality under the law.

Of course, for some groups, equality is a slogan.  For some race-based, racialist organizations, true equality is racism.  Take for example, the reaction of the Congressional Black Caucus to this NY Times story.  Does this sound like an organization promoting equality?  Or, does it read like a group trolling for votes by selling hate, division, racism, and inequality.

Sessions wants to put more people of color in jail and take away their educational opportunities. https://t.co/tIVGGJHGAp

The Congressional Black Caucus is an easy target for ridicule.  It’s a racist organization.

Like most racists, its members are dangerous, angry, and blinded by ignorance.  They spread lies, propaganda, and racial hate to advance their own purpose.  They use the power of their collective to intimidate and harass, and they sell fear for political profit and power.  That fear is based on their racial animus, distrust, and in some cases, hatred of people not of their race.  For some, it is a matter of dishonest politics.  Call it what one wants, but the CBC is a not-so-new face of American racism and intolerance.

The organization gets a pass on its racism for the same reason some Americans think affirmative action should be legal.  Americans tolerate CBC racism because of past transgressions against blacks.  People who perpetuate this dangerous double-standard are rock-stupid or deliberately dishonest. 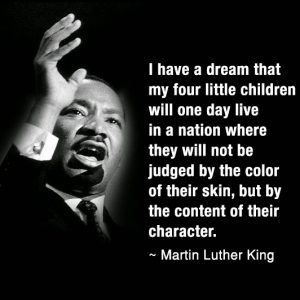 Racism and the bile and hate it generates is the principle reason Dr. King is no longer with us.  If he was alive, however, neither he nor his children would be living in the country about which he and I dream.  Would Dr. King have ever imagined a country where the government mandates racial inequality for people of color at the expense of people of non-color?  I doubt it.  Would he have ever wanted to live in such a country?  I hope not.

People like the members of the CBC claim the mantel of the civil rights movement and the work of Dr. King.  For sure, some of their members were there in the struggle for racial equality.  Those members, having long ago adopted a view that equality under the law is now inequality under the law, bear little resemblance to the dream articulated by Dr. King.

The truth be told, CBC members claim the mantle of King based on their color … and not on the content of his character or quality of his ideals.   They are racists … but they think that it is ok because America is racist too.  Those who distort the idea of equality have no claim to be civil rights activists … irrespective of color.

The false notion that the color of one’s skin determines the righteousness of one’s stand on equality is a false flag of racism hoisted on its own petard.

Affirmative action is unconstitutional … on its face.

Affirmative action is unconstitutional, in its application.  Decisions on housing, loans, college admissions, and job preferences based even one bit on color … is a policy based entirely on racism.

Whatever remedial purpose the purveyors of affirmative action conceived, they created a law that divides us by race, rewards us by race, penalizes us by race … and refuses to treat us equally under the law.  That is the effect of a facially unconstitutional policy.

When Justice, Sandra O’Connor penned the majority opinion in Grutter v. Bollinger in 2003, she approved of unconstitutional race-based formulas in law school admissions.  She said, famously,

“The Court expects that 25 years from now, the use of racial preferences will no longer be necessary to further the interest approved today.”

Race relations continue to deteriorate, and America many not have 11 more years of policies of inequality, approved by our government, before the divisions they create further rip us apart.

The fierce dissent in that case wrote most passionately and most correctly on this issue.  Clarence Thomas joined it.

For the immediate future, however, the majority has placed its imprimatur on a practice that can only weaken the principle of equality embodied in the Declaration of Independence and the Equal Protection Clause. “Our Constitution is color-blind, and neither knows nor tolerates classes among citizens.” Plessy v. Ferguson, 163 U.S. 527, 559, […] (1896) (Harlan, J., dissenting). It has been nearly 140 years since Frederick Douglass asked the intellectual ancestors of the Law School to “[d]o nothing with us!” and the Nation adopted the Fourteenth Amendment. Now we must wait another 25 years to see this principle of equality vindicated. I therefore respectfully dissent from the remainder of the Court’s opinion and the judgment.

As Justice Thomas said, the policy was illegal in 2003; it will be illegal still in twenty-five years.

The Department of Justice can earn its name … and restore our confidence … by doing justice for all Americans … without regard to race.