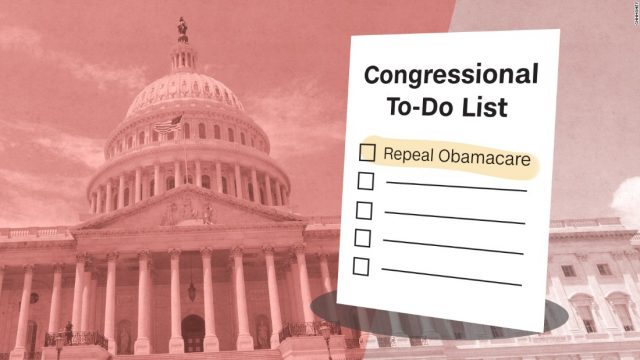 The republican party controls the Senate and the House.  It has a President who ran as a republican.  For eight years, republicans pulled every stunt, gimmick, and grandstanding opportunity to schedule votes to repeal Obamacare.  Each and every single time, the party knew it could not repeal it, and the repeal votes were simply symbolic, irresponsible, political gimmickry. The GOP built a political resistance base on one word: Repeal.

The republican party is awful.  When people wrongly confuse “conservative” with republican, it makes my blood boil.  The modern republican party is gutless, spineless, soulless, political machine.   If not for the modern democratic party, it would be the worst party in the history of this country.  Both parties are awful, and they are actually bad for America, and in particular, they are bad for real Americans.  The two American parties are the flip-side of the same big-government, crony capitalism, insider-elite coin.

Their currency is worthless to Americans.

Obamacare is not insurance.  America doesn’t have real health insurance, and it has not had a free-market, healthcare system in nearly 100 years.  Obamacare is socialism … it is not collectivism in the limited government, founding sense.  It is redistributionism.  Know the difference.  It is socialism in the tyrannical sense.

The GOP is so terrified of liberty and freedom that it refuses to repeal Obamacare because it can’t find its own agreeable version of big government redistribution.  Thank goodness for the handful of conservatives in our government who would not buckle to the GOP’s desire to turn left.

The GOP has no idea that replacing Obamacare with Trumpcare is an absurdity.  It would be a repudiation of American principles.

People will claim much about the #AHCA. Know this: the #GOP just converted Government healthcare from #Obamacare to #Trumpcare

The solution to Obamacare is not some other form of federal big-government care.  It is repeal.  That’s it.   I am not new to this position.

Why not repeal #Obamacare … period. Republic lasted 220 years without it. Humanity, a few hundred thousand years too.

Heck, before the GOP came up with the great idea this week, I reiterated the same thing I have been saying for years.

I honestly don't get why #GOP doesn't do clean repeal of #Obamacare. Once gone both parties MUST MAKE new plan. No other option. #Repeal

The great thing about understanding what America is, and how it is supposed to operate, gives me an advantage over most.  Repeal the law.

If Americans want the federal government to mandate and redistribute healthcare, they will press their elected representatives to make a new plan.  A federal plan that is not free market will fail.  It will not cover all, or it will ration care, make us sicker, and cost us more money … exactly like Obamacare has done.

What these parties have not yet tried is full, deregulation of the healthcare and insurance industry, permitting Americans to opt in or opt out, to have choices, to assign their own risks, or to take make their own deals.

It’s simple, neither party trusts Americans to be Americans.  One party is terrified of being painted heartless, and the other is only concerned with putting voters on the plantation and selling mercy in the form of tyranny.

The Republican party fears liberty, and the democratic party hates it.

Humanity has been around longer than we know for sure … and it somehow survived without state-mandated health insurance.  Ironically, even with the mandates, all cooked up to cover everyone, we have a system that does not cover nearly 30 million people.  We made healthcare more expensive, less responsive, less efficient, and for many people, less affordable, and we still don’t cover everyone.  We never will.

Americans deserve and require a straight repeal.  What they deserve after that is the burdens and benefits of liberty.

Just in case you think the GOP and McConnell will actually repeal Obamacare … just remember who told you they would not, and when.