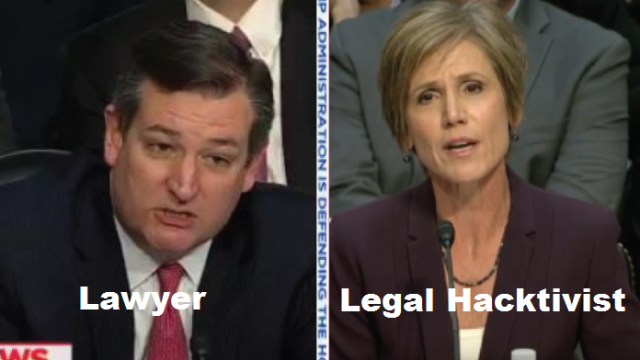 Former political appointee and legal hacktivist Sally Yates is a hero to ignorant internet lawyers and the anti-American resistance.  The fired Obama appointee has all the political skills of a resistance radical and the legal skills of first-year law student.

In her Senate testimony, former Harvard law, top graduate and Supreme Court law clerk, Ted Cruz introduced Ms. Yates to the law.  Ms. Yates, in turn, busted out an answer she knew to be false, wrong, and grossly misleading.  This is why it is always bad to appoint legal hacktivists to positions where fidelity to the law trumps political ideology.

That is why Ms. Yates was fired.

The left cheered like mad as Yates quoted from a statute that had nothing to do with the statute about which she Cruz asked her. Further, she referenced constitutional law, suggesting that non-resident, non-citizen visa applicants enjoy constitutional protections. They do not.

For honest lawyers, this was painful.  For leftist warriors they found a new American hero.

Ms. Yates isn’t an American hero.  Indeed, she’s not even a very good lawyer.  In fact, she’s doesn’t even understand her legal, ethical duties.  I explained the difference between a real hero and Ms. Yates in the piece I wrote about her shortly after the President properly fired her as the acting Attorney General.

The Cruz v. Yates exchange is one that is making the rounds on social media and across the networks.  In fact, pick your news source and you can get a definitive, no hold’s bar view that both won, decisively.   It’s no wonder America is so divided.  We now view the law only through the scratched, battered, distorted glasses of political activism.  In this instance, of course, Ms. Yates lost her legal exchange with Senator Cruz because she really had no idea about what she was speaking, or she simply preferred the rule of politics over the rule of law.

Here is why Mr. Cruz won on the legal merits, no matter your political view.

Senator Cruz asked Ms. Yates about 8 USC 1182(f), the provision on which the president based his temporary travel ban affecting people originating from states identified by the Obama administration as terror concerns.   The provision reads in the only relevant part:

(f)Suspension of entry or imposition of restrictions by President

Ms. Yates, in turn, replies by suggesting that a later passed provision of the Immigration and Naturalization Act (“INA”), section 1152(a)(1) trumps 1182(f).  In fact, the way she stuck it out there, one might even think that Congress meant her newer INA provision to modify, repeals, or make the first contingent on the second.  That’s great politics … but it is crappy law.

If Ms. Yates and Senator Cruz were working at a white-shoe law firm, Ms. Yates would be the ambitious, know-it-all, second-year associate.  Ted Cruz would be the managing partner.  That’s how disparate their skills in the law are.  In fact, I might have called her a paralegal, but any honest lawyer knows that a paralegal is often harder-working, savvier, more experienced, and more valuable than the second year associate I describe. Likewise, a good paralegal never tries to run jive by a managing partner.

Ms. Yates knows that 1152 has nothing to do with 1182(f). One has to do with the agency’s issuance of immigrant visas, and the sensible rule that the agency cannot use race, religion, or gender to discriminate in the normal visa process. The other provision has to do with the power of the President, based on national interest, to — by proclamation — stop entry of “any class” of aliens for a defined period to enter this country.  We are not merely talking apples and oranges here. We are talking fruit and wood.

INA provision 1152 has no bearing on the distinct power given the President in 1182(f).

How do I know that?  I know that because 1182(f) Congress did not make 1182(f) subject to, caveated by, or contingent upon compliance with 1152.  Any competent lawyer would understand that distinction.

Any political activist posing as a legal hacktivist would understand how to exploit the difference for political gain to uneducated, political true believers.

Yates was leaving DOJ.  She was smart enough to realize that she could use her position of trust for political protest to try to stop a Presidential decision by the new boss with whom she disagreed.  In every possible way, she violated her responsibility to the job in order to turn her duty into a baseless, political protest.  She wanted Mr. Trump to fire her.  She deserved to be fired.

When she showed up to testify before the Senate Committee, she proved again why it is never a good idea for America’s top lawyer to be a first-rate politician and a third-rate lawyer.  In her second 15 minutes of fame, Ms. Yates forever earned lifetime jobs with left-wing institutions.  She also flushed an entire career building a legal reputation down the drain. She is no hero … she’s a legal hacktivist, something America needs least.