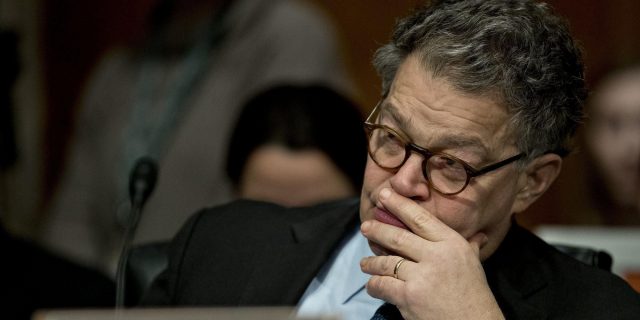 It is a little-known fact that United States Senator Al Franken was invited to participate in the 2013 papal conclave to choose a successor to Pope Benedict XVI.

(Sen. Franken was later asked why he should have been considered qualified to question the papal nominee of the Catholic Church and vote on whether to elect him as pope, considering that Sen. Franken is Jewish. He responded, “Well, I’m a comedian by profession, but I have been allowed to question and vote on nominees for the Supreme Court of the United States. How is this any different?”)

Committed Conservative has obtained a transcript of Sen. Franken’s questioning of Cardinal Jorge Mario Bergoglio, who later became Pope Francis, during the papal enclave. Portions of the transcript are reprinted here for the benefit of our readers. (Note: The transcript begins after Sen. Franken’s opening remarks, which lasted 6 hours and 43 minutes.)

Sen. Franken:  Let me start by saying, sir, that if Pope Benedict had not resigned, we would not even be here today. Don’t you agree that it was wrong to allow Pope Benedict to resign and that he should have remained as pope?

Cardinal Bergoglio:  Huh? Oh, um, I’m so sorry Sen. Franken. I think I fell asleep during your opening remarks. Would you please repeat the question?

Sen. Franken:  I said that it’s a disgrace that we’re even here today to consider your nomination to be pope. We already had a perfectly good and capable pope in Pope Benedict. Shouldn’t he have been kept in papacy?

Cardinal Bergoglio:  Well I really had nothing to do with Pope Benedict’s decision to resign. No one has ever asked me to make policy as to whether and when a pope can or should resign.

Sen. Franken:  Be that as it may, don’t you agree that it’s a disgrace that we’re here today considering your nomination to be pope given how wrong and unjust it was that Pope Benedict’s resignation was accepted?

Cardinal Bergoglio:  Well, again, I wasn’t involved in that matter, and I don’t think it would be appropriate for me to comment on it.

Sen. Franken:  If you think I’m going to allow you to get away with dodging my questions like so many other right-wing papal candidates have done in the past, you’d better think again, sir. Now answer my question: It’s wrong that we’re even considering your nomination to be pope when we could have kept Pope Benedict, isn’t it?

Cardinal Bergoglio:  I really can’t add anything to what I’ve already said. My role as a cardinal and, if elected, as the next pope, is not to judge the process by which Pope Benedict resigned. I think your question is more properly directed to those who were involved in that matter.

Sen. Franken:  So you are going to dodge my question? Fine. I’ll keep that in mind when the time comes to vote on your nomination. Now, Cardinal Bergoglio, you’ve always taken an originalist approach to interpreting the Bible. This kind of rigid approach assumes that what God meant when he wrote it should be applied to a world much different than it was at the time several thousand years ago. Why should we apply God’s intent over the desires of the people who are alive today?

Cardinal Bergoglio:  I’m sorry, senator. It sounds to me like you’re suggesting that a cardinal or pope should ignore God’s will. I’m sure that’s not what you meant to convey, so I’d appreciate it if you would repeat or rephrase the question.

Sen. Franken:  My question is why you have adopted such a rigid interpretation of the Bible that assumes that God’s intent when he wrote it several thousands of years ago is somehow more relevant than the desires of the people who are alive today. Isn’t it more fair to look at the Bible a living, breathing document?

Cardinal Bergoglio:  Well, with all due respect senator, I don’t think the Bible has much meaning as the bedrock of our faith if its meaning isn’t a rock to which we can attach our anchor.

Sen. Franken:  That is a dangerous and radical idea. Are you actually saying that you expect people to live by rules written by God thousands of years before they were even born?

Cardinal Bergoglio:  Well, yes, senator.  As a cardinal, it is not my job to play God. My job is to do His will with faith that in doing so, justice will be done.

Sen. Franken:  Well, haven’t there been times that doing God’s will had unjust results? Don’t you have a responsibility to use your own judgment to prevent that from happening?

Cardinal Bergoglio:  Again, with all due respect, it is not my place to substitute my judgment over God’s wisdom. If God wants to change the rules, He may do so at any time He wishes. Unless and until he does so, my job is to do His will as expressed in His Bible.

Sen. Franken:  Well, the Bible prohibits gay marriage. As pope, are you saying that you would refuse to perform or sanction gay marriages just because the Bible tells you to do so?

Cardinal Bergoglio:  Yes. That’s correct. Gay marriage is proscribed by the Bible, and as pope I would not see it as my place to ignore or rewrite the Bible. If God wants the Catholic Church to sanction gay marriage, He can and will amend or replace His Bible. Unless and until he does so, my responsibility as pope will be to do His will as set forth in the Bible.

Sen. Franken:  I can hardly believe what I’m hearing! You’re actually saying that you’re going to just ignore the desires of gay couples to be married within the Church on the basis of something that was written by God thousands of years ago? Is that really what you’re telling me?

Cardinal Bergoglio:  Yes, senator. That’s correct. My job is not to rewrite the Bible. My job is to perform my duties in accordance with its actual contents based on its plain meaning.

Sen. Franken:  Cardinal, frankly I really see no basis for having confidence in you to do the right things, to promote social justice and look out for the little guy, if we elect you as pope. Your views are radical, extreme, and entirely out of the mainstream!

Cardinal Bergoglio:  Senator, I’ve spent my entire life looking out for the little guy. [At this point, Cardinal Bergoglio launched into a list of “little guys” whom he had helped over the course of his career in the clergy. By an interesting coincidence, his answer to this question lasted exactly 6 hours and 43 minutes.] And so, I think it’s very clear, senator, that I have been a champion of the little guy throughout my entire life.

Sen. Franken:  *Hrghmn* <grunt> Oh, um, excuse me. I must have dozed off during your answer. Um, yes, we’ll review those cases. Regardless, you’ve always opposed the right of a woman to do whatever she wishes with her body, haven’t you? How can we elect as pope someone who is so hostile to women’s rights?

Cardinal Bergoglio:  I have always preached the view of God as established through his Bible that an unborn baby is a human being whose life must be respected just as I respect the sanctity and value of your life and mine.

Sen. Franken:  So you do, in fact, associate yourself with the radical fringe that would deny a woman’s reproductive rights? Again, I think that speaks volumes about the danger you would pose if elected pope.

Cardinal Bergoglio:  I care deeply about the rights and welfare of women, senator, as God commands me to do. But the Bible tells us to respect the sanctity of human life, and I must do so. It is not my place to decide that some lives are sacred and others are not. God has declared that all lives are sacred, and as a cardinal I have performed my duties consistent with that moral value. I will continue to do so if I am privileged to be elected pope.

Sen. Franken:  Are you one of those quacks who believes that members of the Church should base their morality on the teachings of a guy who lived 2000 years ago and spent his life unpatriotically opposing everything his government was trying to do for its citizens? Don’t you agree that Jesus set a poor example of citizenship? And you base your work as cardinal on that guy?

Cardinal Bergoglio:  Senator, Jesus Christ is the center of our Catholic faith. We are instructed in the New Testament that Jesus was, in fact, God Himself. So, yes, of course I base my work on His teachings.

Sen. Franken:  You see, there’s the problem. Jesus lived 2000 years ago in a society entirely different from ours. Yet you insist on doing your work based on his teachings rather than on the ideas and values of such great modern thinkers as Karl Marx, Noam Chomsky, Margaret Sanger, Malcolm X, and Saul Alinsky. You are so backward-thinking that you would be dangerous if elevated to the papacy.

Cardinal Bergoglio:  Again, I’m sorry you feel that way, but I must be true to the duties and responsibilities of my position.  As a cardinal and possible pope, it is my job to do God’s will, not to substitute my judgment for His.

Sen. Franken:  And that right there is why I must oppose your nomination to become the next pope. I see I’m out of time, so that completes my questions.

Sen. Franken:  Don’t try to butter me up. It’s not going to work.