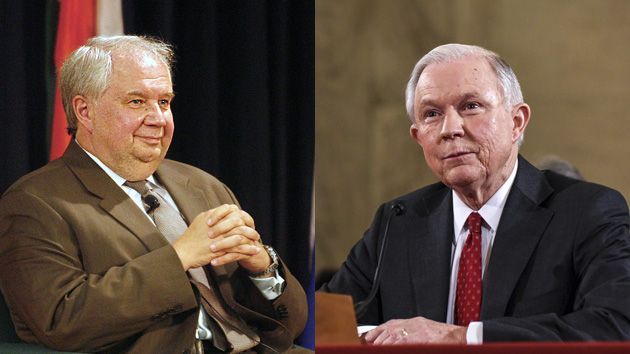 WASHINGTON – It was learned today that Attorney General Jeff Sessions last year, when he was a senior member of the Senate Armed Services Committee, treasonously met with the Russian ambassador – not just once, but twice.

There is no record of what was discussed in those meetings. However, at the time of those meetings, Sen. Sessions (R-AL) was a supporter of then-presidential candidate Donald Trump.

Under well-established journalistic standards for evaluating the conduct of Republicans, Sen. Sessions’ support for Mr. Trump proves conclusively that the purpose of his meetings with the Russian ambassador was to solicit and coordinate Russian intervention into the American election on Mr. Trump’s behalf.

Based on the overwhelming evidence that the meetings occurred, which in itself proves Sessions’ treasonous conduct, House Democratic Leader Nancy Pelosi immediately and heroically expressed the obvious conclusion felt by every loyal American: “Sessions is not fit to serve as the top law enforcement officer of our country and must resign.”

As expected, Mr. Sessions denied that his discussions with the Russian ambassador were related to the Trump campaign, dubiously asserting that the meetings were related to his position as a senior member of the Senate Foreign Relations Committee.

PolitiFact investigated Mr. Sessions’ denial, noted that there were no known facts to support that he did not discuss campaign matters with the Russian ambassador, and rated his denial as “false.”

The Washington Post likewise concluded that in the absence of evidence proving his innocence, Mr. Sessions’ denial was a 5-Pinocchio “whopper.

Republican leaders, failing to understand that Mr. Sessions’ worthiness to remain in public office is determined not by established facts but by the seriousness of the allegations against him, predictably have trotted out their tired old argument that Mr. Sessions should be presumed innocent until proven guilty.

Heroic freedom fighters recruited by former President Barack Obama, who has been universally acknowledged to have been the greatest president in American history, have announced their intention to patriotically set off car bombs, vandalize national parks, and kill white people until Mr. Sessions resigns and is summarily executed.

The nation waits with trepidation to see if it can survive this unprecedented scandal.