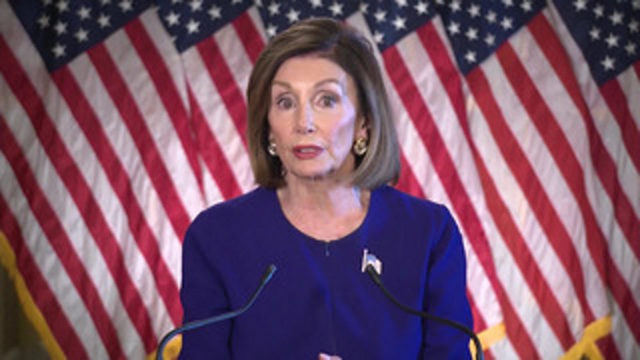 Democratic faithful are excited. They think they are finally going to Impeach President Trump, ostensibly for the sin of taking Hillary Clinton’s turn as President. Impeachment articles from the House Judiciary Committee are certain, but an Impeachment trial is not. This saga has a surprise ending, brought to you by Nancy Pelosi … and it is censure.

Nancy Pelosi never wanted this impeachment process, but she yielded to the growing fringe of her party. That fringe has the money, the energy, and the anger to drive an agenda and turn out the vote. Since their pre-inauguration marches, protests, riots, and flag burnings, the left has demanded one thing … the impeachment of Donald Trump. Nancy is going to give it to them … kind of.

Say what you want about Nancy Pelosi, you don’t kick around in DC as the head of one of the major party for decades without having some political savvy. She knows there is no scenario … none … under which President Trump will be convicted in the Senate. She knows impeachment without a crime is well … criminal. Moreover, it carries with it the likely boomerang effect that will see energy on the right and disillusionment and disinterest from the center.

In short, Nancy knows that the net effect of a Senate trial on impeachment is a political loss. That calculation is easy. First, she can’t win. Second, it ends with Trump not being impeached. Third, the GOP controls the trial, and it could wind up with the Bidens on the stand. Yikes, what a disaster that will be. Moreover, all the ink, air, and internet will be spent on impeachment, during the launch of the democratic presidential campaign. The timing couldn’t be worse, particularly giving the certainty of a loss.

Sure, the short-term damage to the President feels good. But he has fallen as far as he can go. Democrats hate him. Independents are embarrassed by him but surprised and happy with the economy. The GOP is stuck with him, and they are not yielding for the alternative. If Impeachment is a loser, Trump emerges as the winner. The economy is humming, his opponents are battered and get no press, and independents actually start to root for the guy who one party tried to impeach before he was sworn in.

It’s not good politics, and Nancy knows it.

Still, Pelosi couldn’t deny her base the hearings. And, she isn’t going to deny the powerful talking point that the House Judiciary Committee will vote Articles of impeachment, precisely as she announced today. That’s great for her. Now, how does she get out of a trial she can’t win and backlash she can’t stop?  That’s easier.

She will tally the votes informally and find that she can probably get impeachment through the House, though with maybe even a few fewer votes than the inquiry vote. That’s not good. Still, she will be able to say, “the people’s house has a majority to support impeachment.”

She will next announce that partisanship and a fixed, unfair, corrupt jury of GOP Senators doom a trial, noting that many  GOP Senators are already taking campaign money from the accused. Heck, Nancy started floating that part of the strategy as a talking point three weeks ago. Now, it will grow into a chorus.

She will, instead, offer a House Resolution of censure, which might even gain some GOP votes. The Censure resolution will be firm and great political grist for her team. She will waive it on the campaign trail as she reminds voters that unless they vote for a Democratic Senate, the country will be at the mercy of a lawless President, if he gets reelected.  In fact, she may even hint that with a democratic senate, she can complete the job, if Trump somehow wins. Nancy doesn’t want this trial now.  Grandpa Joe Biden doesn’t want this trial. Only the hard left, some political columnists, and a few right-wing never Trumpers want this trial. That, Nancy knows, doesn’t give her the Senate or the Presidency for her party in 2020. In fact, Nancy might be even more concerned now that her party is led by old white guys, that Trump is going to win reelection, and her only fight is to hold the house and take the Senate.

Will elements of the left throw a tantrum?  You bet. That’s what the democrats raised and trained them to do. However, Nancy’s audience is the ever-smaller group of independent voters who will swing this election by swinging razor-thin majorities in close states. She can’t afford to lose them. She knows the anti-Trump voters are coming out. What she needs is the agnostics, and she can’t risk a losing show trial that converts Trump into a victim … a victim presiding over a booming economy that is making great the wallet and retirement of independent voters.

This ends in censure … or it ends in a disaster for Democrats.

If this goes to trial, you know that Nancy no longer controls the party. If that’s true, the Democratic shift from classic liberalism to altleftism will be complete.  That kind of party still can’t win in America.