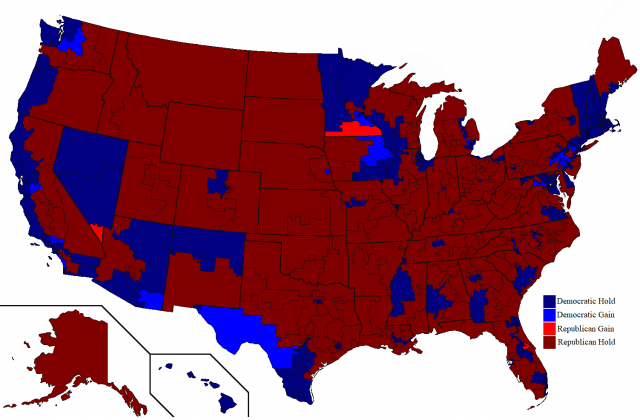 As I write this piece 1 day after the election, here are where things stand:

House: Democrats so far have gained a net of 29 seats with 11 races still not called. This means that in the end they most likely will have a majority of 20-25 seats.

Senate: Republicans so far have gained a net of 2 seats with Florida and Arizona still not called. I believe Republicans most likely will win both of those seats, with Arizona being a retention but Florida being a pick-up for a net gain of 3 seats, giving them a 54-46 majority.

Governors: Democrats so far have gained a net of 6 governorships. Georgia has not yet been called, but I believe it will remain Republican. This result means that Republican will hold 27 governorships vs. 23 for Democrats.

Here are my take-aways from this election:

The Democrats and their “news” media worked night and day for over a year to create a “blue wave” that would show that the American people hate President Trump as much as they do. Alas, the American people had the temerity to have minds of their own, and the results did not reflect hatred of the president.

There certainly were areas of the country where the voters showed hostility to the president – enough to give the Democrats control of the House, but only by a fairly small margin – much less than in most mid-term elections in modern history. Other areas of the country utterly defied the Democrats/”news” media and voted in Senate races to show support for the president. In the end, although the Democrats had a good day on its face, in context the Republicans did considerably better than presidents’ parties typically do in mid-term elections.

This result denied the Democrats and their “news” media any credible claim to an anti-Trump mandate by the American people. This means that if the Democrats abuse their powers in the House to harass the president with frivolous investigations and subpoenas, they will likely pay a political price for it in the the next couple of elections.

Arguably President Trump’s greatest achievement (of many) in his first two years has been getting large numbers of judges confirmed who will interpret and apply the law as written rather than legislating from the bench liberal policies that the Democrats were not able to get passed through Congress. What makes this accomplishment particularly impressive is that over the past year or so the Republicans could only afford to lose one vote to get these judges confirmed.

With the addition of 3 more Republicans, it will be even easier for the president to transform the judiciary back into an actual judiciary. This will be especially important if Trump gets one or two more opportunities to appoint Supreme Court justices. At a minimum, I think it’s likely that Justice Clarence Thomas will retire next year so that Trump can appoint a younger conservative to succeed him.

Turnover in presidents’ cabinets is pretty common after mid-term elections, and there will probably be even more than usual this time. Trump has grown and matured during his time in office, and he now has a much better understanding of the kinds of people he needs in those positions to maximize his effectiveness.

The Democrats, of course, will try to obstruct any appointment that might help the president be more effective in advancing his conservative agenda. This will be especially true when Trump appoints a new attorney general who plans to actually show up for work. So, once again, the additional Republicans in the Senate will be helpful in getting those nominees confirmed.

Leverage Against the Democrats’ Weaponization of the House:

As discussed more below, the Democrats have made no secret that they intend to weaponize the House to wage war on the president. They intend to launch scores of investigations and deluge him and his administration with hundreds of subpoenas in an effort to hamstring him, prevent him from being able to do his job, and optimally (for them), impeach him.

Well, a funny thing happened on the way to the massacre: The Republicans increased their Senate majority, which in turn increases their ability to do to the House Democrats exactly what they are threatening to do to the president. In fact, both President Trump and Senate Majority Leader Mitch McConnell have announced that they will do exactly that if the Democrats abuse their investigatory powers. If it’s war the Democrats want, it’s war that the Republicans can make sure they get.

Democrats’ Weaponization of the House:

The Democrats have gleefully announced their plans to harass the president with a deluge of investigations and subpoenas. Nevertheless, I list this development as “bad” but not “ugly” because the American people didn’t give them a mandate to do that, so they face considerable political risk in doing it.

Also, as discussed above, the Republicans have the threat of the Senate and the executive branch doing the same against the Democrats as leverage to discourage excesses by the House Democrats in their war on the president. Finally, if Nancy Pelosi becomes speaker (which I do not consider to be a sure thing), as partisan as she is, she is also very pragmatic, and she is likely to rein in excesses in order to try to preserve her party’s control of the House in 2020.

The Democrats can’t actually get bad left-wing legislation passed into law with both the Republican Senate and Republican president as bulwarks to stop them, but the Republicans won’t be able to get anything of their own passed either.

Well, that’s hardly the end of the world. In fact, how is it any different than the past two years when the Republicans had the majority? Other than tax reform, can you name any conservative legislation that the Republican congress passed? Repeal of ObamaCare? No. Funding for the border wall? Nope. Balanced budgets? Please.

The fact is that virtually everything the president has accomplished for the country was through deft use of his executive powers. He gave up months ago on trying to get anything done through an inept Republican congress.

Okay, so the Senate and president will need to negotiate with the Democrats on funding bills. Again, how is that any different? The Republicans allowed the Democrats to all but write the last omnibus spending bill, giving them almost everything they wanted. No one was bragging more loudly about that bill than Chuck Schumer.

So, we’re going to have a legislative stalemate where nothing gets done? Meh. We had that anyway.

The Democrats flipped 7 Republican governorships, while the Republicans picked up one low-population state that currently has an independent governor. The result is that Democrats now have either control or leverage in the 2020 congressional redistricting of 53 new districts. The one state Republicans flipped only has one congressman, so they don’t do any redistricting.

Slightly offsetting that strategic gain by the Democrats is that my home state of Colorado passed a referendum placing the drawing of our 7 congressional districts in the hands of a non-partisan commission rather than the Democrats who now have complete control of our state government. It was the one piece of solace in an otherwise abysmal year for Republicans here.

Nevertheless, the Democrats are now in a position to gerrymander at least a couple dozen districts that previously would have been drawn by Republicans. Considering that Democrats have actually won more total votes nationwide than Republicans in the past several congressional elections, Republicans losing some of their redistricting powers puts the Democrats in a much stronger position to retain control of the House over the next decade.

There is no question that the Democrats increased their power and influence in this election, but that outcome was expected based on historical trends. Relative to those trends and to the expectations created by the “news” media as they worked to create a “blue wave,” the Democrats underperformed, and the Republicans won the expectations game.

Most importantly, the Democrats failed to establish an anti-Trump mandate, with the voters sending a more nuanced message that they may not especially like Trump, but they don’t hate him either. Donald Trump is our president, and even if a president is unpopular or controversial, the American people tend to be protective of him. (See, e.g., the impeachment of Bill Clinton.)

The Democrats want to weaponize the House to take Trump down, but the election results did not give them a mandate to do that. Rather, it sent a message that the people want the Democrats to be a check on the president but not to be his mortal enemy.