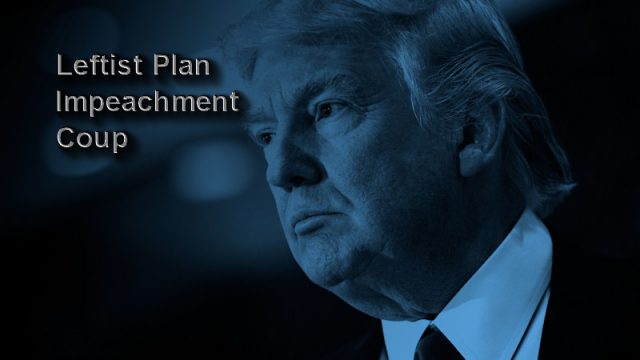 The worst kept secret in Washington is that the Democrats are planning to impeach President Trump if they win control of the House this year.

Nancy Pelosi is trying desperately to get Democrats to stop talking about it during the campaigns, but Democrats in the House and Democrat House candidates across the country have been talking about it and promising it literally since the day Trump won the election. Many have already made impeachment a campaign pledge.

There is no factual or legal basis for impeachment, but that doesn’t matter. The Democrats have pledged to use impeachment as a means to overturn the results of the 2016 presidential election.

Let that sink in for a moment. What we are witnessing is a plan by a major political party to weaponize a provision of our Constitution that was meant to ensure honest government in order to unseat a duly elected president based on nothing more than their personal and political hatred of him.

There is a term for an effort to overthrow a duly elected government without any legal basis: coup d’etat.

In recent days, I have gone to numerous political forums on Facebook and challenged anyone to cite any action that President Trump has taken that warrants impeachment. Not one person has provided one.

But the Democrats have pledged to impeach him anyway.

The Senate: Our protection from a radicalized populist House

Fortunately, our Founding Fathers, in drafting our Constitution, had the foresight to create the Senate as a safeguard against this kind of populist abuse of power by the House of Representatives. In a widely told story in 1782, Thomas Jefferson asked George Washington why he had supported a bicameral legislature during the Constitutional Convention. Washington responded:

“Why,” asked Washington, “did you just now pour that coffee into your saucer, before drinking?”

“To cool it,” answered Jefferson, “my throat is not made of brass.”

“Even so,” rejoined Washington, “we pour our legislation into the senatorial saucer to cool it.”

From the time the Constitution was drafted, the Senate was intended to protect the country from exactly the kinds of overzealous and hyperpartisan House representatives that we have today.

Fortunately, the Senate has a long history of meeting that responsibility, particularly when it comes to presidential impeachment.

In 1868, in the aftermath of the Civil War and the assassination of President Lincoln, the House of Representatives and the Senate were both overwhelmingly controlled by self-proclaimed Radical Republicans. The president was Andrew Johnson, a southern Democrats who had been elected vice president on a unity ticket with Republican Lincoln.

When Lincoln was killed and Johnson ascended to the presidency, the Radical Republicans were determined to find a way to remove him from office. The plan that they implemented was to set him up for impeachment by passing a bill prohibiting a president from firing anyone in his cabinet without Senate approval. They knew Johnson would disregard this new law, and when he did fire an official without Senate consent, the House immediately impeached him as planned.

Impeachment means to bring charges against the president. Once that happens, it is up to the Senate to hold a trial to determine whether to convict the president and remove him from office. So, the Senate convened a trial.

There really no dispute that Johnson had violated the new law, but most people also recognized that this law was unconstitutional. Nevertheless, the vast majority of the overwhelmingly Republican Senate voted to convict and remove him from office. But seven Republicans voted to acquit on the grounds that the impeachment was politically motivated and not constitutionally meritorious. As a result, the Senate fell one vote short of the two-thirds majority required to convict.

This case set the important precedent that the Senate will not convict and remove a president who was impeached for out of political spite and will only do so if the impeachment charges are warranted on the merits.

This precedent was reaffirmed when, in 1998, the Senate declined by a large margin to convict impeached president Bill Clinton. There was little doubt in anyone’s mind that Clinton had, in fact, committed perjury and obstructed justice as alleged in the House’s articles of impeachment. However, the Senate’s vote to acquit reflected a widely-held belief that his actions in the context of an extramarital affair were not of such gravity that they warranted overturning his election by the American people.

(Full disclosure: I worked for a Republican member of the Senate during the Clinton impeachment trial and was part of a team that advised him during those proceedings. At the time, I was in favor of convicting on both counts. With time and distance, I am no longer certain that Clinton’s actions constituted high crimes and misdemeanors along the lines of treason and bribery, which as discussed below, is the constitutional standard for removing a president from office.)

Given those precedents, it is obvious that today’s Senate has the responsibility to protect our country and Constitution from the efforts of House Democrats to find or contrive a reason to impeach and remove President Trump.

The Constitution’s standard for impeachment: “Treason, Bribery, or other high Crimes and Misdemeanors”

Conventional wisdom is Congress can impeach a president for any reason it wants at any given time and that the courts lack the power and authority to adjudicate the issue. I strongly disagree.

It is true, as many legal scholars argue, that the courts generally avoid dealing with what they consider to be “political questions,” but in my view, this is not a political question. It is a matter of enforcing the limited and enumerated powers of Congress.

If Congress can give the Constitution’s words “Treason, Bribery, or other high Crimes and Misdemeanors” any meaning it wants at any time without any check on that power by the courts, then Congress is free to utterly ignore an important limitation on its powers that was established and ratified by the people of the United States.

The framers of the Constitution, and the American people who ratified it, included those words for a reason. We did not want to give Congress the unlimited power to weaponize its impeachment power by using it to impeach a president for solely for political gain in the absence of a serious crime.

What we the people ratified as the law of the land is that a president can be impeached only for “Treason, Bribery, or other high Crimes and Misdemeanors” – and nothing else.

Yes, the phrase “high Crimes and Misdemeanors” is ambiguous, but it is not entirely undefined. The Constitution characterizes it as “other” actions akin to treason and bribery – two of the highest and most heinous crimes in our code of laws.

It is clear from the word “other” that a president can only be impeached and removed for high crimes and misdemeanors that are on the same level as treason and bribery.

So, if a congress ever were to impeach and remove a president for actions that are not of that nature, I submit that the courts not only would have the power but also the vital responsibility to determine whether the articles of impeachment met this constitutional standard.

The Senate: Our country’s and Constitution’s first line of defense

But it is up to the Senate to make sure it never gets that far.

So, the Senate must make clear that they will not hold a trial on any articles of impeachment that are frivolous or politically contrived on their face. They should announce that they will only convene a trial if charges are brought against the president that meet the constitutional standard of “Treason, Bribery, or other high Crimes and Misdemeanors.”

Right now, there is not an iota of evidence to support any such charges against President Trump. So, barring the emergence of some dramatic new evidence, there is no way the House can pass any constitutionally valid articles of impeachment.

If the House brings articles of impeachment that allege that Trump committed crimes that constitute high crimes and misdemeanors but that have no evidentiary basis, the Senate should quickly dispense with those charges by convening an evidentiary trial and humiliating the House when they are forced to concede that their emperor has no clothes.

If the House brings articles of impeachment that, even if true would not constitute high crimes and misdemeanors, the Senate should summarily dismiss those charges without a trial.

In courts of law, if a party files a case that does not state a claim for which relief may be granted under the law, the court will grant summary judgment and dismiss the case without the submission of any evidence because even if the allegations in the suit were proven, the court would lack the power under the law to grant any relief.

Likewise, if the House passes articles of impeachment that do not rise to the standard set forth in the Constitution, the Senate should pass a resolution so stating and declaring that they will not convene a trial on those impeachment charges. In other words, the Senate should summarily dismiss those charges just like a court would do.

The House Democrats’ plans to unseat a president duly elected by the American people by launching an impeachment in search of a crime is a grotesque abuse of their constitutional powers and a dangerous threat to our constitutional republic.

It is the solemn responsibility of the Senate (and, if necessary, the courts) to protect our country from this attempt by House Democrats at a coup d’etat.