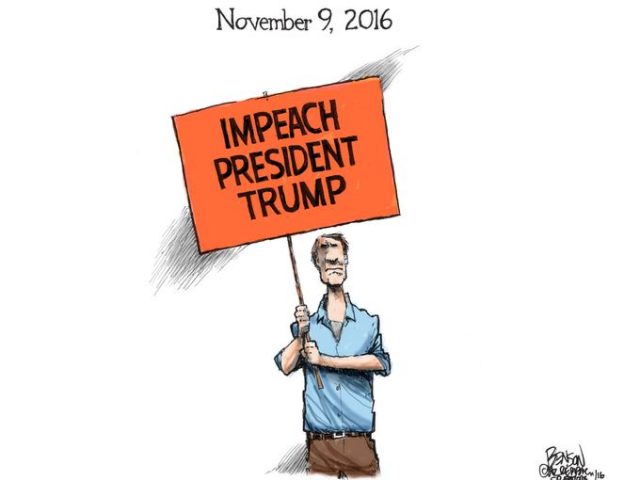 Calling America’s party of the left the “Democratic” Party makes sense in the same way that we call bald men “Curly.”

The truth is that the “Democratic” Party is openly hostile to our representative democracy (i.e. republic), and they regularly do everything in their power to thwart the will of the American people.

Promising to Impeach the President

Let’s start with the “Democratic” candidates for Congress who are running on a platform of promising to impeach President Trump. Nothing could reflect more hostility to our representative democracy.

What these candidates are promising to do is start with a determination that Trump is guilty of . . . something. What that might be doesn’t matter.

Of course, the Constitution states that a president can only be removed through impeachment for “high crimes and misdemeanors.” And, of course, there is not the slightest shred of evidence that Trump has committed any crime of any kind whatsoever – even after a year-long prosecutorial witch hunt by a team of partisan Democrats that has turned over every rock to find or manufacture such a crime by him (about which more later).

Even in the complete absence of any evidence of any high crimes, misdemeanors, or jaywalking by the president, these candidates have promised that they will work to overturn the will of the people who elected him to be their president and remove him from office. Why? Because these “Democratic” candidates don’t like him and think his “Democratic” opponent, Hillary Clinton, should have won.

The smoke-filled rooms are back (and you can guess what they’re smoking in there).

After Mrs. Clinton was coronated as the “Democratic” nominee, the administration of “Democratic” President Barack Obama utilized the immense power of the federal government to ensure that she defeated Republican candidate Trump. We have learned in recent days that Obama’s FBI inserted “investigators” into the Trump campaign and sent others to try to trick Trump campaign members into revealing campaign secrets. We’ve learned that Mrs. Clinton’s campaign paid for a “dossier” of fabricated salacious innuendo about Mr. Trump and that Obama’s “Justice” Department used that “dossier” to obtain a FISA warrant to tap the phones of the Trump campaign and others in his close circle of confidants.

At the same time, when overwhelming evidence emerged that Mrs. Clinton had engaged in felonious criminal conduct on a massive scale that threatened to ensure her defeat (and send her to prison), the Obama FBI and “Justice” Department moved heaven and Earth to cover it up and exonerate her regardless of the evidence. We know, for example, that the letter by FBI Director James Comey exonerating her was drafted months before the end of the “investigation” into those matters and before they ever even interviewed her. We also know that the people heading up that “investigation” were committed to ensuring Mr. Trump’s defeat by any means necessary.

The plan by all of these high-level Democrats was to use every lever of government to ensure that Mrs. Clinton won and Mr. Trump lost. But something happened on the way to the election….

To the absolute horror of the “Democratic” Party and its leaders, and despite all of their machinations, the people had the gall to defy their “Democratic” masters and elect Donald Trump.

To the “Democratic” Party, this result of a democratic election could not stand.

Seeking to Overturn the Results of the Election

So before the ink (and reporters’ tears) were dry on the newspapers announcing Trump’s victory, the “Democratic” Party was developing its schemes overturn those election results and remove Mr. Trump from office. Talk of impeachment by Democrats began literally the day after the election (see above cartoon) and continued over the weeks before he was even sworn in.

To the horror of the “Democratic” Party, Mr. Trump was inaugurated, and the “Democratic” Party then oversaw the development of a “Resistance” to this democratic decision by the American people. “Democrats” rioted in the streets, violently attacked conservatives who were invited to speak on college campuses, and even began punishing students who dared to express support for Mr. Trump and his agenda.

At the same time, the “Democratic” Party and its loyal “news” media contrived a scandal by accusing Mr. Trump and his campaign of having colluded with Russia to win the election. And despite the complete absence of even the tiniest molecule of evidence to support this allegation, and despite the fact that even if there had been any such “collusion,” it would not have violated any laws, they succeeded in getting a special counsel appointed to investigate this fabricated allegation.

Well, the evidence that has emerged from that “investigation” ended up showing corruption by the “Democratic” Party in the 2016 election, but, of course, none of that evidence is being pursued, and the Democrats’ loyal “news” media are dutifully working to bury it.

President Trump understandably is perplexed as to why so much time and money are being spent in an effort to implicate him in a crime that it is now clear he never committed while nothing is being done to investigate the anti-democratic crimes that are all but proven to have been committed by the “Democratic” Obama administration.

But, of course, when Mr. Trump expresses that frustration, the “Democratic” Party and their loyal “news” media respond by seeking to protect the witch-hunting “investigator.”

How do we know that this “investigation” is a partisan sham? Well, there’s the fact that the “Justice” Department has illegally stonewalled every request by Congress for information on that investigation under Congress’ oversight powers. And there’s the fact that the special counsel has been excoriated by a judge for withholding information from a federal court and has been caught overstepping his legal authority in prosecuting someone for the sole purpose of coercing him into giving him something – anything – that can be used against Trump. The court itself is expressed that it is exasperated and offended by the special counsel’s conduct.

So Mr. Trump is now beginning to exercise his constitutional powers as president to demand that his own FBI and “Justice” Department comply with their legal obligation to provide Congress with the requested information.

In response, former Attorney General Eric Holder (of the “Democratic” Obama administration) has called on the FBI and Justice Department to ignore the president and refuse to follow his orders. Mr. Holder is a lifelong radical leftist, but he’s not stupid. He knows that everyone in the FBI and “Justice” Department serves at the pleasure of the president and that they are constitutionally obligated to follow his orders. He just doesn’t care.

To “Democrats” like Eric Holder, the Constitution is just an obstacle to be overcome when our representative democracy doesn’t yield the results they want. In fact, that’s why Mr. Holder is the only cabinet officer ever to be held in contempt of Congress – which happened because he refused to comply with his legal and constitutional obligation to provide information to the democratically elected representatives of the people in Congress. (Of course, his own “Justice” Department shrugged off the criminal referral made by Congress of Mr. Holder for conduct that would have sent anyone else to prison.)

Defying the Will of the People by Ruling by Judicial Decree

Just this week, a “Democratic” Party-appointed federal judge in Virginia found that the Constitution contains a right for girls who “identify” as boys to use boys’ restrooms in public schools. I’ve been practicing law for 17 years and somehow missed that clause in the Constitution. But this is what We the People intended when we ratified the Constitution in 1789, right?

There is absolutely nothing democratic about the “Democratic” Party. They will do anything, no matter what it takes, to impose their leftist agenda on our country without regard to whether we the people want to live under those policies.

The “Democratic” Party cares as much about the democratic principles of representative government as Kim Jong-un’s “Democratic People’s Republic” of Korea does.

In fact, calling them a “Democratic” Party is pretty much the same as calling Mr. Kim “Slim.”