Political tribalism has splintered this country so badly that the leftists who hijacked the Democratic party were forced this week to abandon their religious faith and defend middle-eastern terrorists and MS-13 murderers. That’s how bad political fanaticism has become.

Candidate Trump promised to move the US embassy to the Jerusalem. President Trump did just that, making our best ally and only reliable friend and true secular democracy in the middle east very happy. At home, anti-Trump radicals went berserk.

When terrorists using children as human shields stormed the Israeli border with weapons, bombs, and Molotov cocktails, Israel defended herself and her citizens. Not surprisingly, many terrorists and their pawns were killed in the staged, propaganda attack.

The American left ran with the narrative that it was all Trump’s fault and that he essentially murdered those “peaceful protestors.” Peaceful protestors don’t fire weapons, throw bombs, storm borders, or fly kites into other countries with Nazi symbols and homemade bombs.

Still, the Trump hate put the American left and the party it stole from decent, working Democrats into the position of defending terrorists and attacking Trump to prove one’s ideological purity. It’s sad.

How bad is the ideological zealotry among the altleft and their democratic masters?

Not one democrat showed up in support of the embassy opening. In fact, scores of elected Jewish democrats choose to put their political religion and trump hate above their country. I have heard of party over country before, but now it is political faith over religious faith.

Political fanaticism in the new religious fanaticism of the 21st Century.

After that sad and failed assault on common sense, the altleft and its lying media took to the airwaves to declare Trump, again, a racist. The left ran with the outright lie that Trump called “undocumented immigrants” animals. He didn’t. It’s not only a lie, it’s a lie the liars know to be lie. They also know that if you repeat the lie enough, the political zealots and zombies on your team will believe and repeat it. 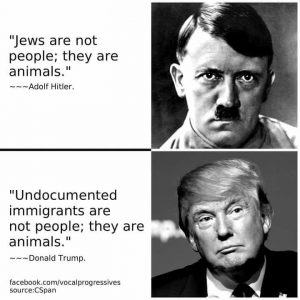 “Trump is a racist” is the functional political fanatical equivalent of the “72 virgins” lie that religious fanatics tell their zombie sheep. It won’t be long before democratic leftists are blowing themselves up in the name of their party and its hate.

Trump had some not so nice things to say about MS-13, a brutal gang of murders and rapists that has a strangle-hold on multiple American jurisdictions. The DC Metro area is becoming its North American world headquarters. 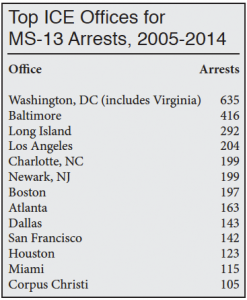 The political left doesn’t care about MS-13. Sure, illegal immigration from our southern border always and in every way increases and strengthens the power and presence of MS-13. However, every time a democratic politician advocates for illegal aliens and sanctuary cities and states, he or she does so knowing that they increase the numbers of MS-13 killers. The efforts of political propagandist to lie about the President’s comments on MS-13 knows no bounds of decency.

When all of our great-great-grandparents came to America they weren’t “animals,” and these people aren’t either.

I laid this out in the Virginia Governor’s race. The Democrats will gladly trade more MS-13 members for a block of voters it believes it can control, and it believes will put and keep that party in political power. That’s the reality of these politically religious zealots on the hard left.

Today, you are now left arguing with crazy people who want to convince you that Trump is evil and MS-13 are people too, not animals. It’s a politically charged, factually ignorant argument made by leftist zealots whose children and loved ones were not raped and murdered by MS-13.

When it is your family member, your daughter, your teenage son … your wife … of your brother-in-law, the local police officer, murdered by these guys, you can come and argue the semantics of humanity with me. 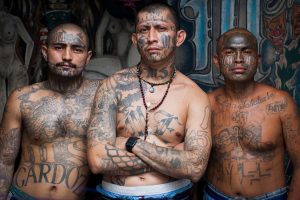 Until then, you can hate Trump all you want. Here is what I know. No sane, thoughtful, decent, American chooses terrorists and MS-13 gang murderers over their President.

You don’t have to agree with Mr. Trump. I disagree with him strongly sometimes too. You don’t have to, nor should you blindly follow or adore him or any figure or party. You have the right and obligation to thoughtful, useful, intelligent, civil dissent.

Once you side with Palestinian terrorists or MS-13 apologists, you have lost your soul to the new religious fanaticism called political tribalism. You are a political extremist.