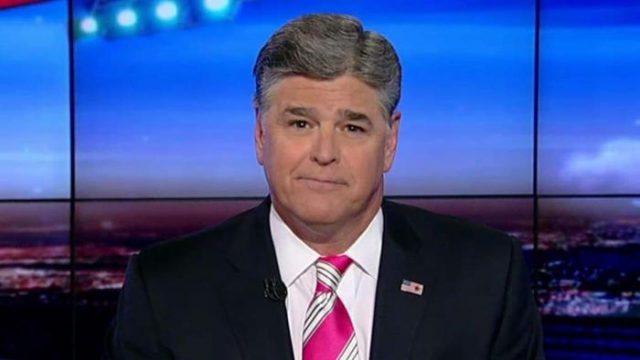 Journalism in America is nearly dead. For the most part, Americans don’t even care. We want our “news” and our “facts” from our “team.” It is no wonder we are at each other’s throats. We have neither a common culture nor any identifiable single standard around which to rally the nation. In the media, Conservatives must be better. Sean Hannity should know that.

The mainstream media is a cesspool of corruption, bias, and left-wing cheerleading. It is openly engaged in an organized, political effort to resist and take down a sitting President, who primarily seems intent upon adding fuel to their fire.

Please … spare me the caterwauling about how horrible the left is.

I know. I preach it all the time. The left-wing media is so dishonest that it falsely labels its lefties as “conservatives.” A prime example includes pundits like David Frum, the author of a column actually titled “The Conservative Case for Voting for Hillary Clinton.”

My favorite faux conservative is the radical, left-wing, anti-Trumper, Jennifer Rubin, who the Washington Post highlights as a “conservative blogger” writing its “Right Turn” blog. On her best day, she is a center-leaning, democrat devoid of any substantive experience and completely untethered from conservative principles.

The problem with liberals posing as fake conservatives is that they mislead, redefine, and purposely destroy the brand of conservatism. That is why we started our site … to stop the misbranding of our “conservative” label.

Of course, the altleft is never held to any journalistic standard. In the MSM, radical racists, rubes, racialists, and con-men proliferate. MSNBC has the propagandist, Rachael Maddow and the racist Joy Reid. Popular voices on altleft radio include even more radical voices, like the conman, Al Sharpton, or the “Black Eagle” Joe Madison.

So dangerous and ignorant is Joe Madison, that I listen to his show nearly daily just to understand the radicalism, racialism, and poison he spreads.

The problem with radical, altleft journalists is that no one cares what they do or say.

No one is going to hold these types of “journalists” and opinion makers to account for expressions of racism and radicalism. No is going to try to take them down and move them from the public airwaves because leftwing radicalism and affirmative hate are accepted social practices. More alarmingly, some Americans accept this as a “journalistic” norm.

Conservatives don’t have the luxury of being wrong, rude, racist, or radical if they want to stay in any part of the larger corporate media. Sure, there are nuts and radicals on the far right who also misuse and abuse the Conservative label. No one takes them seriously, and real conservatives pound them properly for diluting and hurting our brand.

Conservatives like Sean Hannity, who is really more of a party or personality cheerleader rather than a doctrinaire conservative, hurt the conservative movement when they make missteps like the recent failure to disclose his legal relationship with Michael Cohen before reporting on and defending the man.

This is not Hannity’s first misstep, and this author and this site have called him out before to try to help increase his own credibility. In fact, in this instance, if Hannity had merely started his broadcast by saying, “I know Michael Cohen. I have trusted him for his legal expertise … a fact you should know …,” Hannity would have been more credible than ever.

The latest kerfuffle is inexcusable. If you find yourself apologizing for Sean Hannity over his failure to disclose during his nationally ranked TV show that his pugilistic defense of Michael Cohen was a defense of his own lawyer, you have fallen trap to playing the “my team” game.

Conservatives cannot be an outcome based movement. We are a principles-based movement, which is a prime difference between us and the leftists.

It’s fine if the average American doesn’t understand Attorney-client relationships or the privilege that attaches to them. Frankly, many lawyers don’t understand privilege.

Hannity sought legal advice from a lawyer. Whether the lawyer ever billed him or appeared in court for him or signed a document for him is irrelevant. He sought legal advice, and the attorney gave him that advice. That is an attorney-client relationship, and Michael Cohen was right to treat it as such.

Any competent journalist would have reviewed that scenario with his producers and the station’s legal counsel. Once done, the legal team and producers would have told him that if he were going to comment or report on Michael Cohen, he must disclose his prior relationship, so viewers can understand and evaluate that the reporting or commentary.

That’s how it is, and that is how it must be. If we give a damn about credibility and journalism.

It matters not at all what the altleft media does or how it conducts its business. I am unimpressed by red-faced, vein-throbbing, emotionally wrought defenses of this kind of conduct that begin with, “well, X lies all the time.”

Conservatives are not the other guy. We can’t police their conduct or raise their standards. We need to take responsibility for ourselves, a principle we preach.

Conservatives in the mainstream media must be above reproach. First, it is part of our ethical principles as conservatives. Second, it is essential because we are under attack from the altleft, the left, the center, the fake right, and the alt-right.

Conservatives must be better. We must lead by example, and in so doing establish credibility with the ever-shrinking but the vitally important demographic of open-minded thinkers.

If FOX NEWS fires Hannity, it will be because his breach of trust and disclosure is far outside what SHOULD be journalist norms. And, if we are to have credibility, we need to enforce our standards against those purportedly on our team.

Of course, for real conservatives, the team is America, and the standards are decency, civility, truth, and constitutional conservatism.

Hannity was wrong not to disclose his relationship before reporting and commenting on a story involving his lawyer. Let’s admit that, and work to be better.