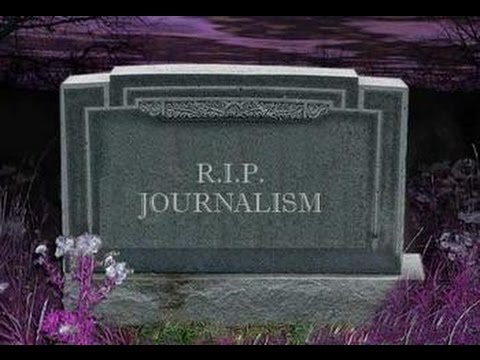 It’s time to face the truth: At the national level, there are no more true news media. They are all partisans.

Until the Republicans recognize and adapt to this fact, they will continue to get steamrolled.

First, let’s define our terms: I consider the national “news” media to consist of the following: ABC, CBS, CNN, Fox News Channel, NBC (including CNBC and MSNBC), PBS, New York Times, Wall Street Journal, Washington Post, and USA Today. Obviously there are hundreds of other media outlets, but the ones I listed are the ones with a truly national scope.

These “news” media operations are commonly referred to as the “mainstream” media. They are anything but.

With the exception of Fox News, all of the so-called “mainstream” “news” media are propaganda organs for the Democrat Party and the left generally. Fox News is a propaganda organ for the Republican Party and the right generally. (In making these characterizations, I refer specifically to what these organizations insist is news reporting and not to their opinion pages and shows. So, for example, I include the Wall Street Journal as a left-wing “news” organization because, although it has a generally conservative philosophy in its op-ed pages, its “news” pages consistently exhibit a left-wing bias and agenda.)

There are no longer any true news organizations at the national level that present actual news in a fair, objective, and neutral manner, or who even try to do so.

This is so for a variety of reasons. First, the national news media have leaned left since the 1960s as a reaction to the Civil Rights Movement, the Vietnam War, and, later, Watergate. However, until recently they were biased in their reporting but not agenda-driven in those leanings.

Fox News was created in the 1990s with a right-wing bias in response to the left-wing bias of the existing national news media, so Fox also has never really been neutral.

Today’s “news” media have become overtly ideological and agenda-driven largely as a result of market forces. In the Information Age, we all have thousands of places to go to get our information, and human nature being what it is, most of us go to sources that reinforce our existing ideological views.

Simply put, in a marketplace where people can be validated by getting their information from like-minded sources, there is little demand for straightforward, objective, neutral presentation of news.

So, in order to survive in this market, national news media outlets abandoned their journalistic integrity and transformed into partisan propagandists catering to specific ideological audiences. Most aligned with the Democrats and the left because that was already the ideology held by the people within those organizations.

Fox News sided with the Republicans and the right for the same reason and also as a smart business decision to carve out a conservative niche in the market that gives them a much larger piece of the pie than the other national “news” media that split the liberal audience.

Today’s unabashedly left-wing “news” media have dedicated themselves to the mission of destroying the Trump presidency, the Republican Party and its agenda, and conservatism generally – in part because that agenda plays into the views of their target audiences and in part because they truly believe in and want to be a part of that agenda.

To do that, they report news from a standpoint that treats leftist ideology as mainstream and conservative ideology as extreme, bigoted, and dangerous. They also contrive and invent scandals against Republicans based on little or no evidence while ignoring actual scandals by Democrats for which there is overwhelming evidence. In short, these so-called “mainstream” “news” organizations do everything in their power to tear down Republicans and conservatives and protect their Democrats and leftist allies and constituencies.

Fox News does the same as the rest of those “news” organizations except that they side with the Republicans and conservatives against the Democrats and liberals.

President Trump this week, through the official website of the Republican National Committee, released his list of the 11 worst fake news stories of the past year. The list included a number of stories by CNN, New York Times, and others that deliberately were objectively and verifiably false with the intent of smearing President Trump and the Republicans. This was a valid list, and no reasonable person can dispute that the stories on that list were malicious and disgraceful and were not legitimate “news.”

Scores of other fake news stories could have been included on that list from the leftist national “news” media that routinely manufacture and contrive defamatory stories against Trump, Republicans, and conservatives.

Also this week, President Trump ordered CNN “reporter” Jim Acosta out of an Oval Office photo op when, for the umpteenth time, he obnoxiously started shouting insulting and malicious questions at him.

I applaud President Trump for doing what I have called on Republicans to do for many years: Stand up to so-called “news” organizations that use their power and influence to defame and undermine them.

Unfortunately, Trump is perhaps the worst possible person to lead this fight for the Republicans because he too lies and exaggerates on a regular basis. It is rare for any day to end without Donald Trump having made numerous statements that are verifiably false or at least grossly exaggerated. His doing so gives the “news” media and their leftist defenders and apologists a steady supply of ammunition to justify their treatment of him.

Trump’s personal dishonesty also causes people to shrug off his indignation about the “news” media’s dishonesty and see it as warranted under the circumstances.

But journalistic integrity is not circumstantial, and Trump’s dishonesty does not justify dishonest conduct by “news” media from whom the American people have a right to expect honest reporting.

Legitimate news media have a job that is fundamentally different than that of politicians, which is to report the news fairly, objectively, and dispassionately in all circumstances, thereby enabling consumers to reach their own informed opinions and conclusions. It is not the job of the news media to take sides or pursue agendas. In fact, it is unethical for them to do so.

Politicians, by contrast, are not reporters. They are advocates. It is not their job to be fair, neutral, and objective. Their job is to advance the ideas and agendas that they were elected to pursue. Many, like Trump, House Democrat Leader Nancy Pelosi, and Senate Democrat Leader Chuck Schumer, are intentionally dishonest in arguing their causes, while many others do so with honesty and integrity. But none of them claim or pretend to be neutral and objective because, again, that’s not their job.

The job of the news media specifically is to be neutral and objective. Their job is not to advance agendas. It’s to hunt down stories, report them fairly and accurately, and let the chips fall where they will.

That’s why their intentional dishonesty and pursuit of ideological agendas is so much worse than that of President Trump and any other politician. The “news” media’s refusal to report legitimate news fairly and accurately is a betrayal of and a fraud on the American people.

Nevertheless, that is the state of the national “news” media today, and the Republicans need to operate in the world as it is rather than as they wish it were. Every time they grant access to a reporter from the national “news” outlets that are actively working against them, they are aiding and abetting their enemies.

The Democrats know that they can count on the “news” media (other than Fox News) to protect them and go after their opponents. That’s why, for example, they can threaten to shut down the U.S. government in defense of people who have no legal right to be here in the first place. The Democrats know with metaphysical certainty that the national “news” media will portray their actions as heroic and the actions of those opposing illegal immigration as bigoted and heartless.

The fact that Fox News is alone in not going along with the lock-step alignment of the rest of the “news” media with the Democrats makes it easy for the Democrats and leftists to boycott Fox News as having a right-wing bias, knowing that they still have numerous other media organizations to carry their water.

It is time for the Republicans to acknowledge that all of the national “news” media except Fox News are their determined enemies, and they must finally recognize that it is insane for them to continue to legitimize these faux news media organizations by continuing to treat them as legitimate journalists.

The Republicans should henceforth refuse to grant interviews or provide any information to any “reporters” from any of those organizations or admit them to any Republican functions, including press conferences. Just as the Democrats generally shun Fox News as hostile to them and their agenda, the Republicans should shun the rest of the national “news” media and instead focus on Fox News as the only friendly national “news” organization. The Republicans also should seek out and admit real reporters from other smaller organizations who have proven that they are either on the Republicans’ side or at least are fair, neutral, and professional in their reporting.

The days of real news media covering national politics and public affairs in a fair and neutral manner are over. The battle lines have been drawn, and all of the national “news” media have chosen their sides.

How much longer will the Republicans continue to unilaterally disarm themselves from the fight by pretending otherwise?