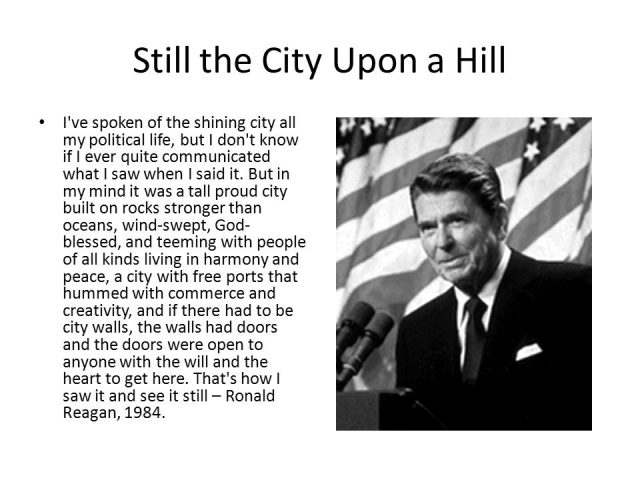 Bad Trump strikes again, and our shining city on a hill loses some of its luster.

Nothing reinforces the reputation of the “ugly American” more than our President comparing countries to shitholes. Nothing is more maddening than me having to write an op-ed with the word “shitholes” in it because a Republican President has no meaningful understanding of decorum or his role as the keeper of the light of liberty.

I wrote accurately that there is a war on Trump.  It seems now he is his most dangerous opponent.

No sentient human being thinks Haiti or El Salvador are models of successful societies and self-governance. Some who want to defend the President will leap to their feet and say, “well, these places really are shitholes.”  Others, of course, refuse to accept the notion that such places or cultures are less desirable than others.

I jokingly tweeted out that Trump created a population of shithole-deniers.

The debate over this Trump inanity misses the mark, as usual.  The question here isn’t whether Haiti or El Salvador are wonderful places.  They are not.  If El Salvador is so great the 200,000 plus foreign nationals here on temporary protective status wouldn’t be fighting so hard their return to their homeland.

The debate should be about people and American immigration policy.  Unfortunately, Mr. Trump turned it again into a debate over whether he’s crazy, and whether America is still a great, generous, country and the torch of liberty.

The latest Trump-caused, controversy is also fraught with partisan hatred and phony sanctimony.

The truth, of course, is that some places in the world are not great, their cultures are broken, their societal structures antithetical to liberty and decency, and their value systems, as countries, are nearly incompatible with the high ideals of American civil society.

Before we mount our high-horse of moral superiority, let’s recognize that liberty, decency, civility, and the best ideals of our civil society are not an American birthright.  They take work, and Americans fail at those high ideals repeatedly.

No one exemplifies America’s lack of moral superiority more than our boorish President.

And Democratic hypocrites looking to score cheap political points against him likewise hold no high moral ground.  Indeed, the overwhelming majority of unsafe, angry, violent, inhospitable places in America are cities packed with Democrats and ruled by the Democratic party.

It is Trump, however, who set himself up for this criticism by both people of good will and the partisan hypocrites.

Trump’s reactionary, unsophisticated, ugly view of certain nations reflects, however, an undeniable kernel of truth.  Indeed, most Americans planning vacations and trips are not looking to head to El Salvador or Haiti … any more than they are looking to go to Camden, Watts, or North St. Louis.

Americans know which places are less desirable than others.  But even the most undesirable cities in the world are not without wonderful people. Likewise, the most troubled countries in the world have people America would be lucky to include in our family.

America ought not to be engaged in creating immigration policy based upon any criteria other than looking for people who bring skills, talent, and value to our country, and who want not merely to come to America, but to be Americans.

No decent American should give a damn from what purported “shithole” such people originate.  Indeed, great people, yearning for freedom, living in desperation and under the boot of oppression can certainly make some of the best candidates to be Americans.

That our President is unable or unwilling to articulate that message is just another broad reason why conservatives like me did not support him as a candidate.  Bad Trump, or Dark Trump, or Angry Trump, simply is not the model of conservative optimism that can sustain a country and build bridges to bring people together.

More troubling is the reality that Mr. Trump doesn’t even have the good sense to recognize that in a meeting with Senators from outside his party, they will exploit any misstep.

In fact, the Democratic party is probably more interested in preserving the DACA debate as an election issue than trying to resolve the issue in a bipartisan way providing Trump and the Republicans the ability to claim a win.  Hence, Trump stepping in a “shithole” gives Democrats a chance to sabotage any DACA agreement, and in so doing paint the President is a fool, hater, and racist.

The ammunition for the charge that Trump is a racist was manufactured and distributed by Trump himself.

No smart immigration policy would ever eliminate people from any country, religion, or race … absent a war or national security concern. Our goal should be to attract the best and brightest and to help bring to America the brave, the adventurous, and those who want to be Americans.

In a time when immigration law and policy are the turning point of our national culture and the focus of national debate, the President is weakening the hand of America to compete for world’s best and brightest. Worse than that, he is making America look like a place where fewer great people may want to come.

Instead of simply articulating an American first immigration policy, Trump makes us look like angry dolts.  He then feeds gruel to the media masses convinced that everything he does is based on race and white supremacy.

The charge against Trump that he is racist isn’t based on any racial comment by him.  It is based on the conclusion by liberal elites that because Trump identifies as shitholes countries with large minority populations that he really means to say minorities themselves are inferior.

Ironically, Trump accurately identified the state of these countries, it is the media and the left that concluded why they are in such a state.  There is racism there, it just isn’t on the part of Trump.

Trump’s sin is idiocy and allowing himself to be painted as a rube, a racist, and an ugly American.  It’s a much bigger deal than his defenders admit or understand.

When people say Mr. Trump is “unfit” to be President, it is because they recognize that he is ill-tempered and seemingly ill-equipped to defend himself and his policies from even the most transparent attacks.

It’s hard to argue that America is great, when our days are spent defending a leader who can’t articulate his own policies, does not cast our country and countrymen in the best light, and who replaces the high ideals and optimism of America with a dark, foreboding, cynicism.

Soon, I fear, the rest of the world will be calling us a shithole.