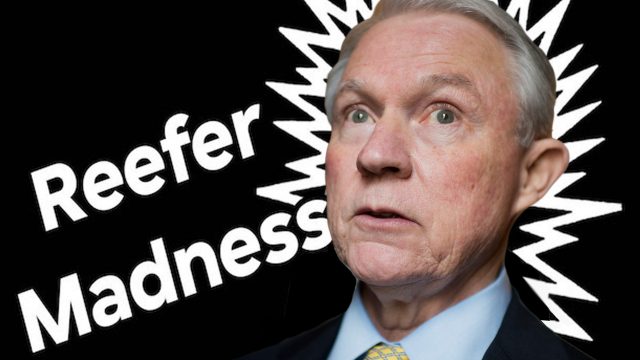 The pot industry is big business.  Today, Senator Sessions took an action that may make the industry go up in smoke.

Dope-smokers, pot pushers, and Maryjane millionaires alike are up-in-arms after Attorney General Sessions rescinded the Cole Memo that the Obama administration used to invalidate federal law by executive fiat.  The result of the action has people with reefer madness joining forces with Constitutional illiterates.

I am, however, deeply sympathetic to the argument that legalizing pot for medical and recreational purposes is a province of the states and the people.  I am a conservative, and the founders designed our federal government to be retrained from attacking our liberty, leaving all rights not expressly enumerated in the Constitution to the people of the states.

If the people of the state of California want to permit themselves to light-up, make gummies, and turn the entire state into a glazed-eyed, munchie zone, I think they should be permitted to do so.  However, federal law, passed by Congress, prevents that big 420 party.

How do you return the rights of the people back to the people?  You have Congress repeal or amend its law.  That’s how this Constitutional republic works.

Unfortunately, Congress didn’t do that.

Instead, when people decided to mainstream weed, the states went ahead and started making an industry of dope growers, smokers, and profiteers in direct contravention of federal law.  Ironically, all the liberals poured out of the woodwork to become states’ rights advocates and federalists at that exact moment.

When Arizona passed laws to restrict illegal immigration, the same liberals poured out of the woodwork to tell us that immigration law is the province of the Federal government.

Liberals don’t have a strong aversion to pot like they do to national borders, so they embraced the idea that federal laws with which they disagree ought not be enforced, and when the feds do enforce such laws, it’s just mean and wrong.

The left elected the self-ordained, constitutional law professor Barack Obama in 2008.  Using his superior knowledge, he had his lawyers create the Cole Memo.

You probably read about the Cole Memo powers in the Constitution.  Basically, it allows a President to invalidate federal laws he doesn’t like by asking a guy named Cole to write a memo to federal prosecutors telling them not to enforce a certain law.

How could the Cole Memo be wrong? Mr. Obama is a Constitutional Law Professor, right?

It seems some Americans are fired up, rather than firing-up today because Sessions rescinded an illegal order directing federal authorities not to enforce the law.*  These people are constitutional illiterates, whether they are dope smokers, pot profiteers … or even US Senators.

Colorado Senator Cory Gardner tweeted this out today upon hearing that AG Sessions would rescind an illegal order and set the law back to what Congress passed and a President signed.

This reported action directly contradicts what Attorney General Sessions told me prior to his confirmation. With no prior notice to Congress, the Justice Department has trampled on the will of the voters in CO and other states.

Senator, if only there was some elective body that could change this law?  Hmmm?  Let’s think about this together.  That body works every day on … what’s it called Senator?  Capitol something … oh yes … rhymes … with bill.

You want to legalize pot Senator, offer a bill … on Capitol Hill.

Liberty doesn’t require that we make smart decisions, but it does require that the people be permitted to make decisions about their lives free from unreasonable government interference or intervention.

If Americans want to combat the opioid epidemic and compete in a global market for high tech jobs by getting stoned to the beJesus belt … have at it.

However, we have a Constitutional Republic here … and no amount of reefer madness, constitutional illiteracy, or whining should be allowed to replace it.

Growing and selling pot is against federal law.

* Of course, I am aware of the legal argument that administrative agencies have the right to prioritize enforcement, and hence choose to essentially not enforce certain laws.  That’s how we go 20 million illegal aliens in this country.  I don’t think this type of agency discretion is right, proper, legal, or in any way Constitutional when it serves to vitiate the law. When non-prioritization leads to non-enforcement, it means a properly passed law is rescinded by fiat.