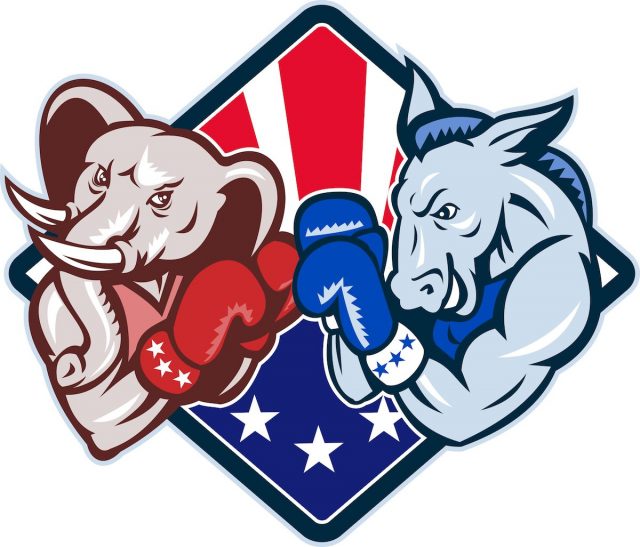 I have no idea who will win tomorrow in Alabama, and I have no intention of telling anyone to vote for either major party candidate.  Vote your conscience.  Vote your values.  When I mark a ballot, I treat it like I am putting my family’s name … the name my father gave me … as a stamp of approval on a candidate.  In Alabama, neither candidate is worthy of that stamp from me. Turnout like crazy and do the best thing you can for your country and state, and simply write in this selection: “No Moore.”

Let’s make them both lose.

Rejecting the binary either/or party game is the ultimate act of swamp draining.  Reject both candidates.  That would be a story.

Unfortunately, most of America votes based on party affiliation.

Many Americans claim they are “independent,” and they like to tell friends that they vote on the “person” and not the party.  I think they believe that too, even though the evidence is overwhelming that it is not true.

Political consultants know two things about most voters that the voters don’t seem to know about themselves.  Horrible, wretched, negative ads work, and 90% of Americans predictably vote for one party or another … over and over and over again.

When the consultants help the politicians draw and gerrymander districts, they use that information to help reach predictable outcomes. That’s one of the many reasons why 90% of incumbents win re-election.

So … why do elections swing, you ask?  Well, they swing for two reasons that are far less predictable.  Energy and turnout are less easy to predict.  When a politician loses his or her seat or election in a safe district, it isn’t because one party converts members from the other party.  It is because one party stays home, one turns out, and the small slice of truly independent voters break one way or another.

Does all this lead to a Jones win?  I don’t know Alabama well enough to make that call.  In Virginia, I made the exact correct call on the Governor’s race in June because I know that state quite well, and the predictable factors were easy to analyze.

Unlike Virginia, Alabama has no giant, untapped reservoir of democratic voters it can send to the polls in an off-year election.  So, if Moore goes down, it will be because solid Republican voters stay home and sit on their hands, while more Democrats than normal pour out, and nearly every independent breaks toward Jones.  That’s not as likely as some polls indicate, but it sure is possible.

I am a conservative, so I have no interest of any kind in Doug Jones winning and representing Alabama in the US Senate.  He supports abortion, and on nearly every policy issue, he is dead wrong.  If I lived in Alabama, he could never win my vote.

So-called conservatives like outgoing Arizona anti-Trumper Flake might vote for a Doug Jones, or send him money … but no real conservative could ever do that.

What happens if Doug Jones wins? A Jones win doesn’t …

Give control of the Senate to Democrats

Stop the appointment of conservative judges

Mean Democrats can or will hold that Senate seat

Losing a Republican vote in the Senate is not great, and it would push the Senate closer, numerically, toward Democrats.  However, in 2018, the Democrats are defending a remarkably difficult Senatorial map where it is not merely possible, but likely, that the Republicans will pick up Senate seats even in the off-year election.

The most immediate effect of a Jones win is an increasingly energized democratic party that raises more money, which will help it in 2018.  A Jones win hurts the President, who threw in with Moore.  A weakened President is bad for America, and certainly bad for that President’s agenda.

If Moore wins, what effect does that have?

Give Democrats a rallying cry for the 2018 election and fundraising

Cedes the “moral” high-ground on sexual assault to the Democrats, remarkably

The Moore fight is also an extension of the war between Reagan-style conservatives and Trump style nationalists.  As such, Moore is not only combating Democrats and the “resistance” movement, as well as strong, credible, and troubling accusations of sexual impropriety, he is fighting a wing of his own party.

In Alabama, 71% of Republicans don’t believe the allegations against Moore. That means a staggering 29% do believe them.  Also, Doug Jones, according to a December 11, 2017, Fox News poll, holds a 29-point lead among Alabama independents.  Likewise, turnout is expected to be higher than normal, and requests for absentee ballots are sky-rocketing.

We won’t really know what will happen until the people of Alabama show up and vote.

We do know this. A special election to fill a Republican Senatorial seat in a state Mr. Trump won be 28 points should be a slam-dunk for any GOP candidate.  That this race is close reflects remarkably poorly on Mr. Moore.  Democrats will try to convert a Jones win or even a narrow escape into a loss and indictment of the President too.

My personal view is simple. My dad was a World War II Marine, a hero, and conservative pillar in the community where I grew up. He gave me a perfectly clean last name, and he asked me to keep it that way.  Lending it to Mr. Moore violates that trust.

But this election isn’t about me, or Mr. French.  It isn’t about Trump.  It isn’t really about Doug Jones, or abortion, or control of the US Senate.  It’s about Mr. Moore and what the voters of Alabama think is an acceptable floor of conduct for a US Senator.  Tomorrow, we get that answer.

I will tell you what political consultants also know, it’s impossible to coordinate strategic voting among any number of voters that matters.  Maybe Alabama can prove the parties and their consultants wrong.

Of course, if Alabama voters want to drain the swamp, they could show up and vote for someone else.

If voters in Alabama want to drain the swamp … just write in “No Moore.”