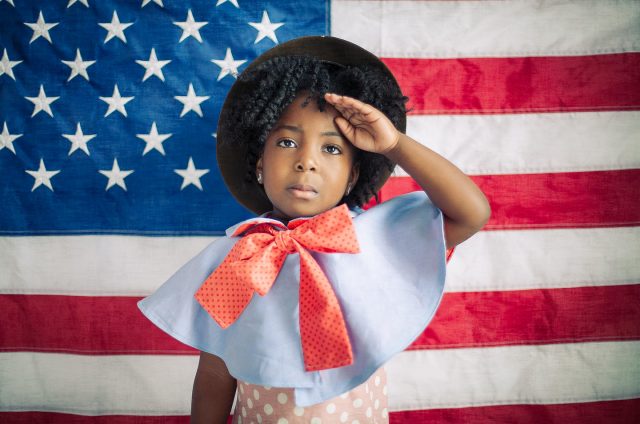 America is great when Americans are great.

Make America Great again!  What a line. Reagan had it first, of course, and did it with optimism.  Running on a slogan of making America great, greater, or great again has real appeal to most Americans because we do love our country.  We should.  It is great, has been great, and can continue to be great.

Of course, it can always be greater.

America is in search of a “more perfect union” since her inception.  Sometimes, we are greater than at other times.  Some bristle at the idea that America is great or ever was great.  Others mock Mr. Trump because they think we were already great.  Like her people, America can always be greater.  She must be greater.

I like to say, if you want to make America great, you need to make great Americans.

Governments don’t do that.  Families and communities do that.  If you are waiting for a party, a government, or a red hat to make America as great as you hope, you will be disappointed.  You … yes, you … you must make America great on your own. 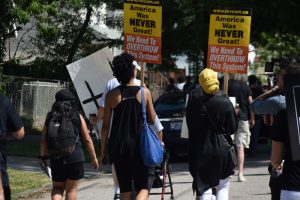 For some people, America will never be great.  They want something from it America doesn’t promise and cannot deliver.  They want equality of outcome and they demand their happiness guaranteed.  I’m sorry, humanity hasn’t figured either of those out yet, and neither of them is a duty or promise of our country.   Being great isn’t a natural right, it’s an aspiration.

America is great.  She’s not perfect.

An angry young activist created a firestorm when she wore this hat during the election.  Funny, when I first typed this, I accidentally typed, “wore this hate.”  That works too.  You choose. 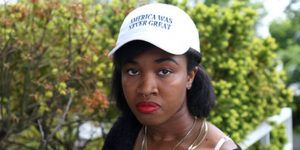 Smile Ms. Lake, America is better than you think.

A country that makes and creates fame for a cynic can’t be all bad?  Ms. Lake, minimally skilled, a deep chip on her shoulder, and filled with political rage, sits in a country that permits just that rage.  That’s pretty great.  Still, many like Ms. Lake continue to ask the question she did after she created this fire-storm … when was America great? 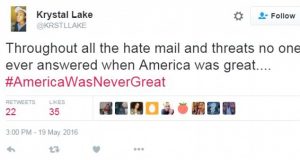 Could it be this young woman really doesn’t know when America was great, or when America is great?  Read a book young lady, it’s a better investment than that hat … or that hate.

America has been less than great, and that’s on us too.  We are people, bound by the frailties of being human.  We created one sensational system of liberty, and yes, we applied it primarily to white, male, property owners. Then we made it better.

Learning from our mistakes, growing, accepting responsibility, and working to change … that’s how we become great as people and as a nation.

America is only as great as her Americans.  Keep repeating that.

None of that requires a political party, an advanced degree, or any color, creed, gender, or orientation.  We are the Americans.  Every day, your life takes place in a little part of the geography called America.  Why not make your America great again, and let’s see if that spreads?

I really am sorry that Ms. Lake grew up thinking, believing, and living a life where America isn’t or wasn’t ever great.  I hope she decides to make it great for herself and others.  That’s up to her.  I am doing my part.

We endeavored to create “a more perfect” union.  The guys who wrote and signed the Constitution, from which that line of the preamble comes, they are dead.  This grand experiment of making America great falls on the shoulders of the living.

America was great.  America is great.  And America can be even greater.  Now, let’s do our part.