Viva Las Vegas … or long live Las Vegas!  More importantly, long live the spirit of Las Vegas.  Many Americans have been moved and inspired by the acts of heroism in Las Vegas, even while some sick and sad elements of our society leaped on this horrendous massacre to score and push political points. The story of Las Vegas is in the American acts of bravery and compassion, not in the senseless deaths.

Whatever tragedy is foisted on Americans, we have an uncanny knack of meeting it with acts of love, selflessness, and old-fashioned heroism.  Those who underestimate the greatness of America do so because they do not understand the goodness of Americans.

The media harps on the death, the shooting, the guns, and the carnage.  Far better stories are emerging from the blood-soaked field.  The narrative of Las Vegas is in the witness accounts of Americans helping, shielding, saving and comforting each other.

We will and must have our time to discuss the facts of this attack.  Likewise, we will and should discuss what sensible policies might be put in place to safeguard Americans in the future.  As I suspect, we won’t find any magic answers.  Blood-thirsty murderers will kill you by bomb, knife, truck, gun, plane, or any way they can.  If public policy existed to stop it, we would already have put it in place.

Today, yesterday, and this week, however, are NOT the time to focus on political partisanship.  While some never like to let pass a political opportunity presented by tragedy, a civil and decent society knows we do not argue public policy while we stand over the still warm bodies of dying loved ones.  How some Americans … on both sides … miss this, I know not.

Until we have all the facts, and until we have laid our dead to rest and given their families and our fellow Americans the support they need in a time of such grief, we need to find the decency and restraint to shelve the political tomfoolery and focus instead on the acts of goodness that saved lives and showed our mercy and compassion.

I tweeted this yesterday as my initial response, and it remains the same today.

Let's focus attention on heroes & victims in #LasVegasShooting, not on acrimony. One heinous act, THOUSANDS of acts of heroism. #LasVegas

Americans need our support, our love, our sympathy, and our reassurance. We also need to be reminded that a single act of evil, no matter its treacherous result, cannot unwind the goodness and decency of our country.  We need to know and understand that one single act of destruction does not define us.  The thousands of acts of goodness … or Americanism … define us. That is the real America.

Without hesitation … these bystanders turned their truck into an ambulance.

Bystanders turn their truck into a makeshift ambulance to carry victims of Las Vegas shooting to the hospital. https://t.co/S5591vlvwH pic.twitter.com/J6s1KfC8S6

They were not alone. Many injured and wounded made it out of the fire zone and to hospitals thanks to complete strangers who transported wounded, shocked, and devastated fellow Americans to help and safety.

Other Americans tended to the injured and dying, giving them literally the clothes off their back.

Sonny Melton, a young nurse at the concert with his wife shielded her from the gunfire.  He was hit and died.  She is alive today because when evil struck, love was prepared to be a shield.

In Las Vegas, Americans poured out immediately to give aid and comfort … and to give their blood to save lives.

This. Is. Vegas.
This is our community.
These are our people.
Thank you to everyone here donating.#PrayForVegas #VegasShooting pic.twitter.com/wn5RA5jVLX

Sisters and brothers helped and shielded each other.  Strangers helped strangers escape, scale the fence, and take cover.  Nearly 600 people were injured, and at least 59 had died.  But in a crowd of nearly 22 thousand, as death came instantly and evil cast a dark and foreboding shadow, Americans found the strength to be great, to be kind, to be merciful.

We owe those heroes the decency of restraint and the recognition that evil cannot defeat goodness. The stories of bravery continue to emerge.  And, as is always the case, our police were running to the sounds of the gunshots.

For the cynics and opportunists among us, you will get your chance. Your shrieking will be heard by someone.  It won’t be me.  Your desire to divide, blame, profit, and score political points won’t be robbed from you. Idiocy always finds an audience.  America has not yet found sensible idiocy control either.  See exhibit one below: 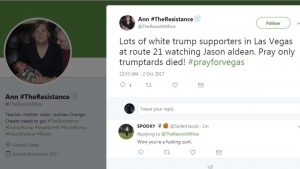 This week, however … we can’t hear you.  We won’t hear you.  Take a knee … and shut-up.  Those of you who think politics is best shoved down throats of a nation full of heroes still washing the blood of their friends off their hands, and still wiping the tears of despair from their faces … we’re making a list and putting your names on it.

When the adults in this society step up and discuss public policy and how we might really help keep Americans safe in the future, we won’t be listening to you.  We will remember that you screamed over our dead and held them up for your own political purpose.  We will shun you as a decent society should, taking a lesson in courage from those who gave all in Las Vegas.

For the overwhelming majority of Americans … thank you for your tears, your prayers, your blood, your service, your compassion … and your fundamental goodness and decency.  America is great when Americans are great.  I choose to remember the great American heroes in this Las Vegas massacre and the people we lost who they tried to save and comfort.

When America is Great