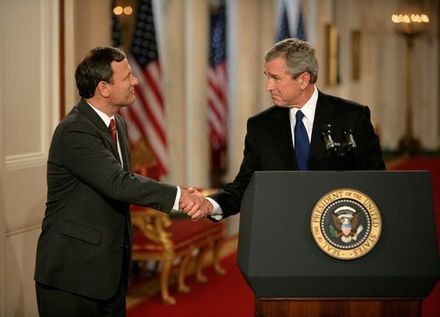 Chief Judge, Roberts, will write the majority opinion and with Justice Kennedy, join the 4 liberal justices to fundamentally change America, possibly forever.   The guess is not at all based on the law.  The individual mandate is unconstitutional, and no number of justices saying otherwise will make it Constitutional correct.  Remember, this is the same Court that once found it Constitutional to consider blacks as property.  They do not decide last because they are always right, they are always right, under the law, because they decide last.

The irony that Roberts, a Bush appointee, and the man appointed directly to be chief judge, will be the author of this catastrophe is likely to be lost on the radical liberals who fought his nomination.

Coming into this week, I thought for sure this Obamacare was a dead-letter.  Indeed, I saw it as a 5-4 decision.  Since no liberal justice in history ever stands for the proposition of limiting the size and scope of government, the liberals present no Justice who might be a cross-over vote.

Then, as we got closer, I began to study the Court for clues.  The clues are troubling.

First, it is clear from the decisions handed down this term that Roberts is due to draft an opinion.  So, make no mistake; the chief judge of this Court will be drafting either the majority opinion to uphold Obamacare or the minority dissent.   Second, the Arizona decision was, in some ways, a complete surprise to court watchers.  Kennedy and Roberts joined the liberal wing, minus Kagan, to provide a win for Obama on the key challenge to that law.  On the legal question of federal power and so-called federal preemption – and more importantly on states’ rights — Roberts and Kennedy embraced federal power and again deemphasized federalism.

It is, however, the Arizona dissent that tells us the most.  Dissents and opinions are months in the work, and they are written with the full knowledge of the decisions of other cases.  That is to say, the lecture and undressing that Justice Scalia gave the majority in his Arizona dissent was drafted at the same time and with the full knowledge of the Obamacare vote.  How angry was Justice Scalia with the Kennedy and Roberts sellout?  He took the time to read his entire dissent from the bench on the morning of the decision.  In my view, and the view of others, his fiery dissent represents not just an anger at the Court’s betrayal in that case, but an opportunity to tip his hand at what the Court was about to announce in Obamacare.

Now, admittedly, the preemption issue of the Arizona case, which the Court got dead wrong, is not the commerce clause issue.  Tying the two together and guessing that Justices will expand federal power in both cases is pure speculation, but the Scalia dissent is the basis of that very reasonable speculation.  Also, consider that Roberts was less than hostile in his questioning at oral argument.

Yes, as a paralegal to the Solicitor General of the United States, I saw more than 20 Supreme Court arguments.  Taking anything from the questioning is true folly.  On that fact, most observers agree.  However, if you combine that observation with other factors, my speculation gains strength.

As pointed out by one Court observer, Roberts is the ultimate Washington insider.  He spent his life here, and he spent much of his legal career on the administrative side.  He has been raised in a legal environment where federal power is unquestioned, and its scope is never fought, but instead justified.

In addition, Roberts has 30 years to serve on this court.  He can continue that chief judgeship as a lion of the left, a king of political bipartisanship, and proof that Conservatives can compromise.  This may well be his personal thinking.  In the end, we are foolish if we don’t think Justices consider what’s best for them and their legacy.  In that calculation, we know not what he thinks might be best.  However, we can guess what he might perceive to be best for the inside the beltway circles where he will run for the next 30 years.   For these reasons, I think Roberts is seriously considering ignoring the law and running with the liberal wing of the party.  That, however, is not the only consideration.

The liberals long thought that any chance to win this had to come from swinging Kennedy.  Indeed, Justice Kennedy’s rather lackluster judicial service has been propped up by his “swing status” on this court.  As a Justice willing to swing, he wields great power.  If Roberts swings, he steals Kennedy’s thunder.  He relegates Kennedy to a back bencher.  Roberts drafts the opinion, and Kennedy loses the spotlight as the swing vote.  Instead, the Chief Judge is viewed as the man who created the strong majority.  He gets the credit.  In fact, Kennedy is stuck trying to decide if he wants to lose 5-4, with Roberts swinging and him staying, or does he want to join the majority and stake a claim on the biggest decision the Court has had, arguably, since Roe v. Wade.  If he stays with the Constitutionalists, he will not write the dissent.  Sure, he can write his own, but the principle dissent will be written by Scalia, almost certainly.  If he swings to the Majority side with Roberts, he does not get the credit Roberts gets, but he basks in the same glory of a strong majority.  In so doing, he gains the favor of Roberts.  For these reasons, I see Roberts and Kennedy shifting to join the liberals.

Roberts has no political risk.  The anger of the right can’t unseat him.  Kennedy is already viewed as suspect, and his time on the Court is much shorter – perhaps short enough that he decides to leave shortly after this big splash.

The real question here is whether or not these two justices see resolution of this case through a coherent, legal philosophy, as the standard, or whether their legacy and personal prestige is the more important goal.  Kennedy has no coherent legal philosophy, and his lurch to the left in support of tyranny and federal power will be no great surprise.

In Roberts, we have a man who Bush assured us was a Constitutional conservative and originalist we can trust.  Of course, Bush also once looked into the eyes of Vladimir Putin and saw Benjamin Franklin and not Joseph Stalin.   Tomorrow, we find out if the liberals were right about Bush.  Is this whole damn thing really his fault?

The safe money is on a 5-4 decision to invalidate the individual mandate.  Life without wild speculation, however, would be too mundane to bear.

*** I penned this “Note” for my Facebook followers on the day before the Obamacare Supreme Court decision.  I edited it for clarity, but the entirety of the analysis is the same.  Sadly, I was completely right about Roberts.  Kennedy, as we now know, held the line.  The link is to the old piece, warts and all, really just to show the true timeline.