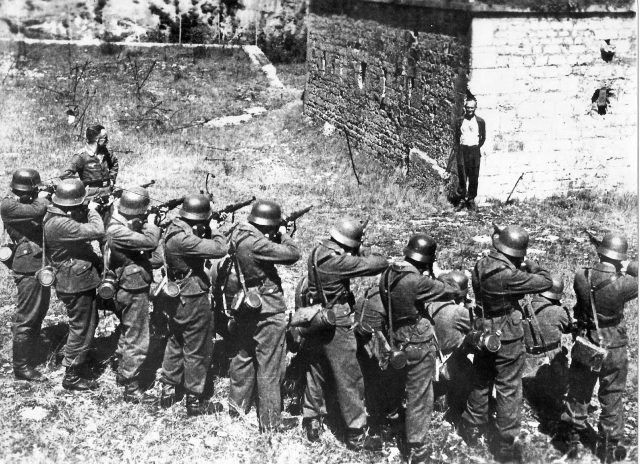 The Democrats, their lapdog “news media,” and their base of leftist activists collectively call themselves the “Resistance” to President Trump and the Republican Congress.

Their use of that term is shameful and disgusting.

The left have always been masters of propaganda, and they adopted the term “Resistance” because that term has always referred to those who resisted the Nazis in World War II.

The “Resistance” to Trump consists primarily of left-wing activists sitting at home on their computers spewing hate on social media. A few of the more radical (and unemployed) leftists living in their parents’ basements are paid by organizations funded by George Soros to show up and protest wherever, whenever, and whatever, Soros directs them to do.

Activists opposing President Trump and congressional Republicans enjoy the comfort of knowing that they need not fear any reprisal or personal harm because they live in a country where their right to do so is guaranteed in our Constitution, enforced in our courts, and ingrained into our national culture.

Compare that with the actual Resistance to the Nazis.

In World War II, Resistors were fighting the greatest evil the world has ever known. The Nazis were rounding up and killing innocent civilians, mostly Jews, literally by the millions. Their goal was to murder every single Jew in Europe, and eventually the entire planet. Anyone caught harboring or helping any Jew in any way faced summary execution.

As for the non-Jewish populations of conquered and occupied territories, the Nazis asserted complete domination over them, stealing their businesses, homes, and possessions at their pleasure and often using the local populations as slave laborers.

In Eastern Europe, children who had what the Nazis considered to be “Aryan” features were taken from their parents and sent to Germany to be raised by “Aryan” Germans as a way of strengthening the “purity” of their bloodlines.

Those resisting the Nazis knew that if they were caught, they would either be killed on the spot or sent to a death camp and killed there.

They operated out of cells that had little coordination between them so that if any one cell was discovered by the Nazis, the members could not be tortured into revealing the existence or location of others.

They usually lived and operated in the middle of forests to make it as difficult as possible for the Nazis to find them, and they were constantly on the move.

Their every action required intricate planning, and every step of every plan placed the members at risk of being captured and killed.

Members of the Resistance also knew that they could be exposed by Nazi collaborators at any time. Tens of thousands of Resistance members, like the one in the picture above, were, in fact, captured, and almost all of them were brutally tortured and killed.

The Resistance to the Nazis is arguably the most courageous and heroic effort against pure evil in the history of the human race.

The “Resistance” to President Trump and the Congressional Republicans, by contrast, is mere opposition to a political agenda with which the “Resistors” express disagreement from the comfort and safety of their computer keyboards.

Furthermore, there is no danger that the political agenda opposed by the leftist activists calling themselves the “Resistance” can ever be implemented without going through a constitutional process that guarantees that it reflects the will of the American people. Anything that does pass through that process is, by definition, legitimate, and any “resistance” to such laws is nothing more than disagreement on issues of policy which is protected under the Constitution.

In short, while reasonable people may disagree on the policies of President Trump and the congressional Republicans, there is nothing happening in our country to “resist.”

The Democrats’ effort, in collaboration with their “news” media allies, to equate themselves with the actual Resistance during World War II is morally repugnant, perverse, and utterly sickening. This label must be rejected, and those using it must be publically shamed.