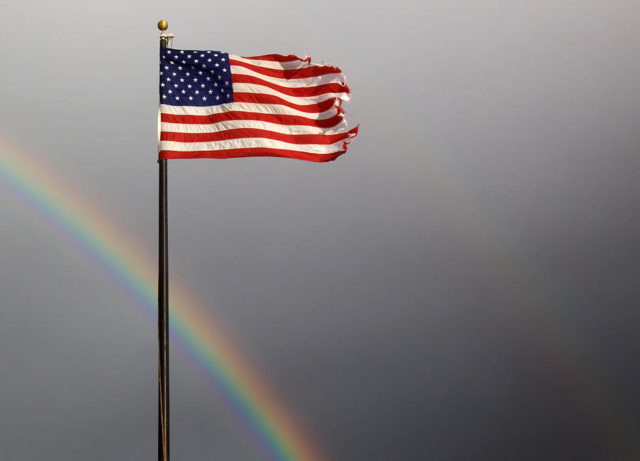 In times of world crises, America has always stood strong. We are more than a beacon for liberty and hope. We are the world’s greatest exporter of compassion, aid, and assistance. COVID-19 is a viral pandemic that has crashed the shores of Fortress America. It is at this precise time that America … and more precisely … Americans must be great again.

COVID-19 might be making us sick and killing our vulnerable loved ones. But, it is the culture of indecency that has unwound our society for more than 50 years. The late, great, liberal Senator Patrick Moynihan warned us of a society that defines deviancy down. We failed to heed that warning, made decades ago.

We are being tested now. In a time of fear, panic, and economic upheaval, the fabric of a civil society must be strong to keep warm and safe her people from the frigid winds anarchy. The fabric of our society is worn, it is thin, and in too many places it is tattered.  That’s our fault.

I have written before … and it remains true today … if we want to make America great, we must make great Americans. Only we can do that. Government cannot mandate decency. It cannot dictate compassion, and it surely is in no position to ration hope, inspire innovation or courage. Likewise, it is a poor shield against the bitter flood of hate.

Social media is infected with hate. The blame game is insane. The cult-like hatred for “one side” and adulation for the “other side” is scary. Americans, divorced from a reason-based education system, fueled by partisan hatred, and hooked on outrageous behavior are devouring each other online as COVID-19 spreads across our land. I fear that our hate, anger, and distrust will be harder to combat then the Pandemic.

Make no mistake fellow Americans, a time will come when we must look back and assign blame. We will do so not merely for political profit, but to build a smarter, more effective form of Federalism that works for our people … and whose people learn to work to make it better. Blame abounds. It is without partisanship. We will find that people from all sides might have done more, might have done better, and might have chosen more wisely.

That is not the task of our time. That is wasted energy. Blame and hate won’t cure COVID-19. It won’t stop this spread. It won’t help the sick, the dying, the displaced, and the soon to be bankrupt.

When the time comes, and it will, America will have to face one certain reality. We have failed ourselves. We have done so by building a two-party system and a poisoned political and moral culture that left us vulnerable to outsourcing our production, relying on foreign supplies, services, loans, and people, and letting both parties sell our souls for political power and corporate cash.

We will have to rebuild our nation and our system … and ironically … that starts with working together, now, here, on this problem.

We need more self-sacrifice, more community support, less hedonism, and far less partisanship. It is ironic that in our most dire public health crisis Americans are being asked to retreat to our most reliable structure, the family unit. It is this base that has crumbled hardest, and why such a retreat is difficult.

Americans really only have one job right now. They must sacrifice their desires and impulses. They must stay home, stay vigilant to healthcare requirements, and stay informed. They must support those on the front lines providing emergency services and healthcare. They must answer the call to redirect resources to battle the disease.

Those were not big asks many years ago … but in an age where information is at the fingertips of an entire society, it seems we can’t follow simple directions. We do not think the rules apply to us. So far have we fallen that a City Mayor of a major city has asked his citizens to stop shooting each other so that beds can be freed up for the sick.

That is who we have become.

The question for American now is this … is that who we want to be?

This is our time … we can either make Americans great again … one act, one deed, one personal sacrifice at a time, or we can doom to the ash heap of history the world’s greatest experiment of freedom, civility, decency, and liberty.

The responsibility is not your government’s … it is yours.