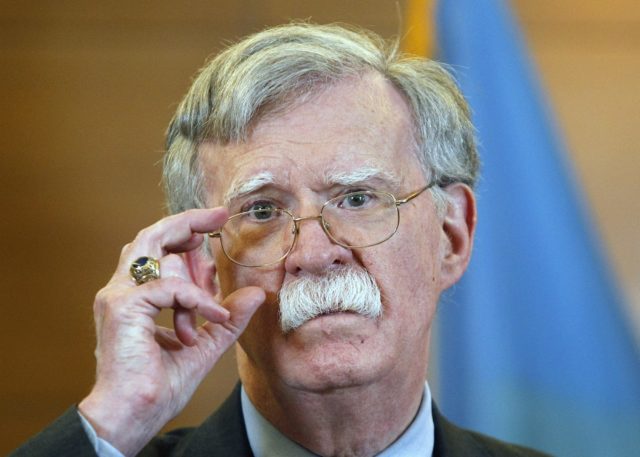 The hard left doesn’t even try to change its playbook. In the new tribalism, it doesn’t have to do so. Just claim a bombshell, drop it at the most absurdly obvious time and let your media and political drones run with a false narrative. It’s weak. It’s sad. It’s the state of American politics.

The biggest story out of the so-called “Bolton Bombsells” is the accurate prediction of Chuck Schumer, who warned the President in 2017 that the “Intelligence community has 6 ways from Sunday to get back at you.”  No doubt. The story of the leaked hearsay that is purported in Bolton’s manuscript is really the story of a calculated intelligence leak, set out to upset the certain outcome of a full acquittal in the impeachment show trial.

When you leave the White House, and you want to write a book, guess what?  You have to submit the book for a review to ensure that it doesn’t contain classified information, let alone information subject to executive privilege. This isn’t anything new. The higher up the chain you serve, the more likely the review is robust, and it goes through the intelligence agencies.

Well “sur-prise … sur-prise … surprise” as Gomer Pyle might have said. The New York Times is out with a tidbit a day, which the Democrats have declared to be proof of Trump’s guilt.  He must testify now, they say. Really? Why?

Nothing leaked so far is even verified, let alone evidence to support impeachment. Herein lies the problem.

The Democrats still insist that Trump demanding an investigation of Biden is a crime and must lead to impeachment. It’s not. But, that’s the talking point. As I explained well before the trial, President Trump can’t be convicted on the known evidence. A quid pro quo is not necessarily a crime. More importantly, to convict the President, the Democrats needed evidence that showed his demands for a Ukrainian investigation were completely baseless and that it was his intention to manufacture the allegation solely for his political benefit.

The democrats have zero proof of the President’s intent. Likewise, the public record is filled, literally, with a plausible explanation that would lead the President to believe or think that Joe and Hunter Biden might have been engaged in illegal behavior implicating Ukrainian corruption. Heck, Politico ran a piece in 2017, by a now New York Times “journalist,” which reported that people in the Ukraine government worked with US Embassy officials to openly support Hillary Clinton … which means they tried to interfere with our election. Read the piece yourself.

Sometimes I laugh at people on twitter and FB, including tenured law professors, most of whom having never tried a case, tweet out that the Bidens are irrelevant. No, actually, they are the most relevant people to the case, besides the President. If these “professors” had practiced law they would know that showing any possible, legitimate tie to illegal or improper acts by the Bidens is a complete defense to the allegation that the President demanded these investigations improperly.

I’ll write it again. It matters not one whit that an investigation on the Bidens would benefit the President. Nearly anything a politician does in the field of policy has a benefit to him or her. What matters is that the proposed act have some legitimate basis related to the duties of the office. Investigating corruption does.

Still … let’s look at the two bombshells so far. You know the bombshells … the leaked, unverified, not-under-oath, perfectly timed, allegations that dropped during the Trump defense.

We don’t have anything from this bombshell we don’t already know as a matter of the President’s defense. He thought there was corruption, and he wanted it investigated. For that, we don’t and can’t impeach Presidents.

The second bombshell is purportedly Bolton’s personal belief that the President conducted his business in too chummy a fashion with our NATO ally Turkey and the entirely untrustworthy Chinese. Well, hang the President, the duly elected Constitutional officer, for not being a hard-ass in the way Bolton, his subordinate demanded.

Yes, the Turks are out of control. But, Trump is in charge of foreign policy, and perhaps he thinks it serves our interest to play patty-cake with their strongman, who leads a country in the NATO alliance where we have bases. Our Presidents have done that since our inception. Christ, we are going to impeach a guy for this?  Trump started a trade war and got concessions from the Chinese. What did Bolton want, unilateral war?

Assuming any of these so-called allegations are true, they are meaningless as they pertain to impeachment … unless you are using impeachment as a political tool to smear and destroy a political opponent or ex-boss.

I have nothing against writing a book that points out the dubious behavior of a former boss in whom the public has its trust. Hell, I’ve done that. I have no idea what we might learn from Mr. Bolton’s book. Heaven knows that Mr. Trump does and says some crazy things.  Moreover, he doesn’t do things the way I want. Still, I’m a real conservative, as opposed to a trump hater. We criticize people for their poor policy choices and bad behavior, we don’t impeach them … unless they commit high crimes and misdemeanors.

Mr. Bolton is no shrinking violet. If he has actually relevant information related to high crimes and misdemeanors, he should step up to any microphone and say so. It’s his duty. Right now, I don’t hear a damn thing from him. I only hear people saying irrelevant things about which someone says he said. That’s not a bombshell. That’s partisan gossip.

So far, the timing of these leaks, the lack of substance, and the clearly partisan nature of them don’t compel me to take them seriously. Quite the opposite. I take those facts, the lack of substance, and the silence of Bolton to suggest that with respect to the impeachment proceedings, these bombshells have all the merit of rape allegations against Kavanaugh, which manifested out of thin air, at the exact and critical moment of his confirmation. We are better than all this.

I don’t find leaks, political conspiracies, and outrageous and unsubstantiated claims the basis to add Mr. Bolton as a witness. Doing so rewards this type of misleading, false, and calculated behavior. If Bolton demands to be heard on the merits and says he has relevant information, then you have my attention.