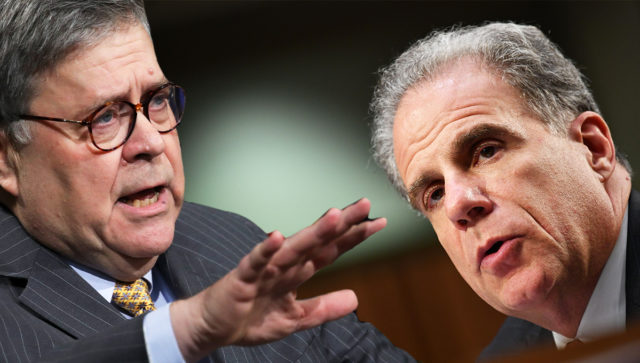 Listening to the radio yesterday, I could almost see the tears in Sean Hannity’s eyes when he saw the long-awaited report by Justice Department Inspector General Michael Horowitz. For months Hannity had been broadcasting that he had “reliable insiders” assuring him that the report was going to be “devastating” to those who abused their powers in launching an unwarranted investigation into a presidential campaign and lying to a FISA court to do so.

Well, I said all along that Republicans like Hannity who had high expectations that this report would actually hold people accountable for their crimes were going to be let down yet again. There was never any chance that an entrenched DC establishment insider like Michael Horowitz was ever going to hold people in the highest levels of power in DC accountable for anything. He never has, and he never will.

Doubt that Horowitz is a DC establishment insider?

How else would you describe the author of a report that found that “the FBI” made 17 intentional misrepresentations and material omissions to a court of law but concluded that no one did anything wrong? Last I checked, “the FBI” is an organization. It is people in the FBI who make decisions and take actions. None of those people who made those false representations and omissions to a court of law did anything wrong?

And how would you describe an IG that previously reported that people leading the investigation against the Trump campaign had proclaimed their determination to see him lose but who now concludes that that those same people had no political bias in launching the investigation?

Mr. Horowitz will be testifying before the Senate Judiciary Committee on Wednesday. Let’s see if any of the Republicans on the committee force him to defend these obvious contradictions.

The most important thing that happened yesterday, though, was not the release of the predictably uneventful IG report. It was the fact that Attorney General William Barr and US Attorney John Durham publicly confirmed that, notwithstanding Horowitz’s whitewash, they have found strong evidence that crimes were, in fact, committed and that those who committed those crimes are going to be held accountable. This is the first time in my adult life that I can ever recall an announcement being made that Democrats and their allies are going to be held criminally accountable for their corruption.

One more thing: The usual suspects are all screaming that it was “outrageous” for Durham to make his announcement yesterday disagreeing with Horowitz’s conclusion that the FBI had good cause to launch its unprecedented investigation into a presidential candidate and his campaign. But here’s what they’re ignoring: Durham did not make his statement in response to the Horowitz report. He made it in response to false reporting by the Washington Post that he agreed with Horowitz’s conclusions. Durham could not allow the Washington Post‘s latest fabricated “news” designed to protect its allies in the War on Trump to mislead the public about his ongoing investigation.

Republicans who are upset that IG Horowitz did not hold anyone accountable for the crimes committed against President Trump, his campaign, and our country were deluding themselves all along. Democrats and their allies have long been immune from justice for their corruption, and there was no reason to think that Horowitz’s report would be any exception to that rule. The good news, though, is that Attorney General Barr and US Attorney Durham have now given us a reason to have confidence that justice really is on the way.