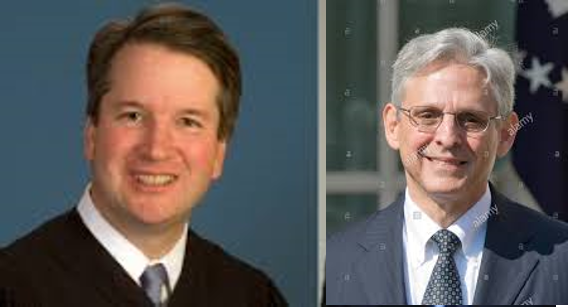 “Garland didn’t get a vote, so Kavanaugh should have to wait until the next election too.”

If that argument appeals to you, it is because partisans and propagandists have designed it to rile up the masses. Today, that disease of stupidity went airborne when a partisan hacktivist playing law professor got The Hill to publish a piece that is legally dubious at best and surely intellectually dishonest.

“Law Professor,” Ken Levy wrote an embarrassing heap of factually, legally, and historically incorrect propaganda for The Hill suggesting that Mitch McConnell made a legally binding “law” with Merrick Garland that the Senate must follow on President Trump’s current nominee.

He even suggested the Democrats should sue to enforce this new “law.” I criticized the piece and a gentleman on Twitter took me to task for failing to explain why it is wrong. That’s fair. 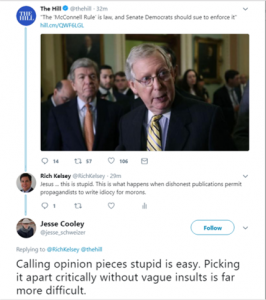 Because this intellectually lazy and misleading “argument” in some version or another is making the rounds on social media, I thought it a useful opportunity to right all the wrongs here in this piece. To be honest, the law professor’s op-ed is embarrassing because it is baseless, and because he should know better.

There is nothing legally accurate in his piece, and if he thinks he has a case, he should bring it on behalf of whomever he thinks has standing. I will wager two million dollars against his tenure that he loses … badly. Indeed, I’d bet more that he would be subject to sanctions.

Before we get to the law, let’s start with the easy stuff.

Is the current appointment of a nominee factually similar to the Merrick Garland nomination?

First, Mr. Obama was not merely at the end of his presidential term, he was leaving the Presidency and could not be re-elected. It was a true open-seat, presidential election. In fact, his own vice-president was not running. Supreme Court seats have rarely ever come open in these circumstances, and not surprisingly with a split government, the GOP made the decision to hold up his nominee.

In fact, the only time since 1900 that a true lame-duck President nominated a Justice in his last year while the country faced an open Presidential election was when Lyndon Johnson nominated a chief justice and new justice. Both failed, and his party was in control.

Before explaining the role of the Senate in that nomination process and explaining to the law professor what he must have forgotten while teaching law in law school, I will walk through more of the factual background.

Not only was Mr. Obama leaving office the year of the Garland opening, but during his tenure as President, he lost a 60 seat Senate Majority and an overwhelming majority in the House. Indeed, by the time he was finished, Republicans nationwide had captured or retaken nearly 1000 state legislative seats. The Obama backlash lost most of the governorships, and as noted, the US House and Senate.

His agenda was overturned, his philosophy rebuked, his majority lost. Not surprisingly, the Republicans did refuse to give Judge Garland a hearing. In so doing, to be clear, they fulfilled their Constitutional duty to give advice and consent on the nominee. They had no legal duty or Constitutional obligation to give him a hearing.

The wayward professor now claims that the Senate and Mitch McConnell have created “law” that is “precedent,” which requires the political majority holding all three branches to wait to the next mid-term election to see if the minority can retake the Senate to block the President’s pick.

First, it should be obvious that this mid-term election is not about the person who makes the nomination. That seems like a big difference to me. Second, the entire Garland event was “on the ballot” when Trump stunned Mrs. Clinton. In short, America voted for Trump to make the nomination, and it voted for the next Senate to confirm him or her.

In short, the GOP gambled and won. The American people spoke when it decided to end divided government.

The President is not even in his 19th month after winning that election, and the left is arguing that his election and that of a GOP Senate is not binding for that time. Really? Let’s face it, if the Democrats held the Senate, and this was the 8th year of a GOP presidency, they too could and would hold up critical appointments, including Supreme Court picks.

We don’t have divided government, even if we are still a deeply divided country. Trump won. While those words may still be hard for some to utter, they are true.  The GOP won, and they control the Senate.

Where is the law or precedent on which this professor relies that proves that the GOP’s political act of blocking Obama’s nominee through their advice and consent has now been converted into a legal obligation?

The law professor says, with no evidence, that the issue is “justiciable.” Is it? Good, give me the case on which you rely. I am not only a former law dean and former law professor, but I am a real lawyer, and I play one on radio and TV.

The professor makes vague references to how laws can be made other ways. No kidding. Actually, professor, the Constitutional duty of the Senate can only be changed by Constitutional Amendment. We don’t amend the Constitution through a course of conduct. This isn’t a state employment statute.

This dispute, to the extent one exists, falls squarely under the political question doctrine, a Supreme Court doctrine with which a law professor should be aware. No court would touch the political decisions of the Senate to dutifully execute their Constitutional authority and block a nominee to whom they do not consent.

Professor Levy, why don’t you bring an action and sue as you suggest since you have figured out what no other lawyer came up with?  If you do, you might learn a bit more about Rule 11 and sanctions that apply to frivolous actions that have no good-faith basis in existing law or an extension thereof.

Frankly, “Professor” Levy is the classic example of the tenure tax. I wrote a book about that subject coming out this September.  This “Professor” is sitting in his office churning out incorrect, meaningless, or irrelevant “legal analysis” that brings no value to higher education, let alone public policy. He’s dead-wood with which some Law School is stuck.

The “McConnell Rule” as he calls it is not law. It has not been passed by both houses, and surely was not solidified by a Federal Court decision. It was a political act by one party, addressing one nominee, under one discrete set of facts. We can’t even say the GOP changed its so-called rule for this nomination because it made no “rule.” Moreover, the facts surrounding the GOP decision to block Garland are completely different than these facts.  Thus, the bogus rule does not even apply.

The Country has a GOP majority, a GOP President, a recent GOP Presidential victory, and all the necessary votes to confirm the President’s nominee. The next Presidential election is in 2020, and the next election where a President cannot re-run and the seat is truly open will be in either 2024 or possibly 2028. Facts matter.

As we teach in law school, interpreting and applying any law requires the application of facts to the applicable law. In this instance, we have no “McConnell Rule” that is law. That’s a made-up strawman by a liberal professor who sites no authority.

Think, for goodness’ sake. Even if we did have such a law, we don’t have the same, on-point facts, which any law professor would understand. That is why the professor’s piece is so troubling. It’s propaganda. It relies on no legal authority or facts, but instead it pushes a political narrative under the guise of legal correctness to purposely mislead and inflame partisans who don’t or can’t know better.

Here is the only applicable and relevant law to Supreme Court nominees. It cannot be trumped by a rule, statute, course of conduct, or political decision. It’s our Constitution. Article 2, section 2.

He [the President] shall have power, by and with the advice and consent of the Senate … shall appoint ambassadors, other public ministers and consuls, judges of the Supreme Court, and all other officers of the United States …

A duly elected President may take the “Advice” of the Senate or not. But, a President must get the “Consent” of that Senate to appoint Supreme Court Justices. In the Garland case, the Senate rejected the nominee and the President offered no other. So, the Senate decided to wait until it got a new President. It did.

That political decision not to consent wasn’t a new law; it was pure politics, and it worked.

The remedy to stop appointments one does not want is to win the next election. However, while one’s political opponent is in the majority, the remedy is only to convince that majority that the nominee is unqualified.

Brett Kavanaugh is supremely qualified. So was Judge Garland, as I wrote previously. Garland just didn’t have the votes. That’s the way the political system and our federal republic works.

Ken Levy may teach law at Louisiana State. That’s a problem for that institution. Here, he provides no law, no reasonable argument, and no evidence that he is qualified to attend law school, let alone stand before students and teach the law.

His suggestion that the political acts of the Senate majority with respect to one nominee, in exercising its Constitutional delegation of authority can be converted into a future legal requirement, knows no credible support among any serious legal academics.

His “legal opinion” is a joke.

The Hill published that piece for its own political agenda and purposeful misdirection. The publication found a weak, politically motivated, law professor who was willing to gravely misuse the franchise and credibility that normally attaches to the title of “Professor of Law.” So, it ran his baseless take.