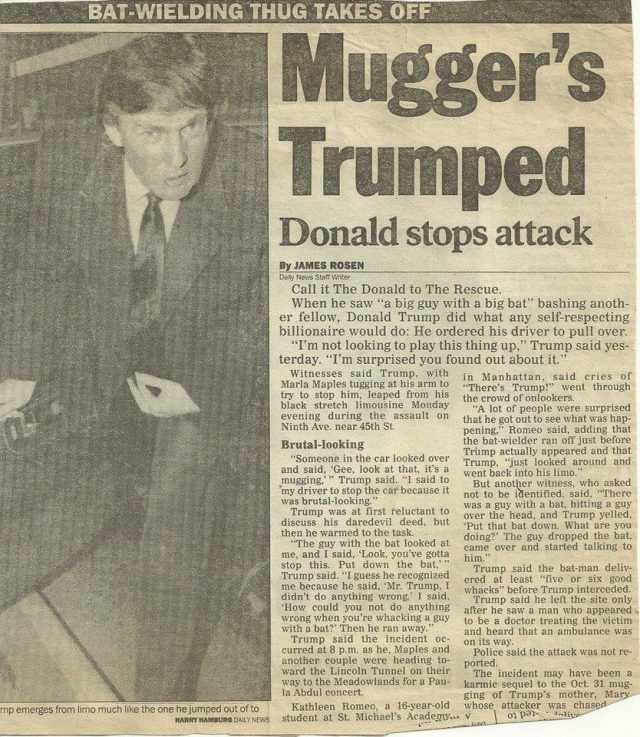 “You don’t know until you test it, but I really believe I’d run in there even if I didn’t have a weapon. I think most of the people in this room would have done that too because I know most of you . . . . The way [the sheriff’s deputies] performed was really a disgrace.” -President Trump, 2/26/18

President Trump was roundly mocked throughout the establishment “news” media for claiming that, unlike the sheriff’s deputies in Broward County, he would have “run in there” to save the students at Marjory Stoneman Douglas High School, even if he didn’t have a gun.

I mocked him too. 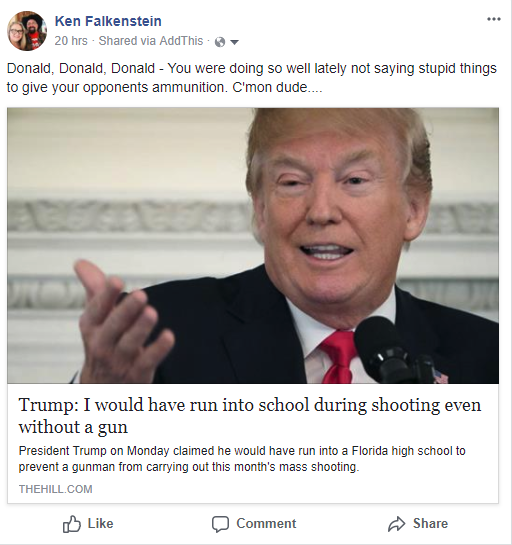 Well, both the establishment “news” media and I have egg on our faces because it turns out that Trump did once intervene unarmed in a mugging in progress.

According to a November 20, 1991, article by James Rosen (who ultimately would become the chief Washington correspondent for Fox News) in the New York Daily News (copied above), on November 18, 1991, Trump was being driven in his limousine with his then-wife Marla Maples headed to a Paula Abdul concert when he saw “a big guy with a big bat” beating up another person. Trump immediately ordered his driver to pull over, and, ignoring pleas from his wife to stay in the vehicle, got out and confronted the mugger.

In the Daily News article, Trump described what happened next: “The guy with the bat looked at me, and I said, ‘Look, you’ve gotta stop this. Put down the bat. I guess he recognized me because he said, ‘Mr. Trump, I didn’t do anything wrong.’ I said, ‘How could you not do anything wrong when you’re whacking a guy with a bat?’ Then he ran away.”

Trump’s account was corroborated by an unnamed witness who also spoke with the Daily News: “All of a sudden, a big long limousine pulls up on an angle, and Donald Trump pops out with the blond, too. There was a guy with a bat, hitting a guy over the head, and Trump yelled, ‘Put that bat down. What are you doing?’ The guy dropped the bat, came over and started talking to him.”

The establishment “news” media will never report this episode or admit that they were wrong to mock Trump yesterday, but I choose to be more intellectually honest and honorable. I was wrong to mock you, Mr. President, and I apologize.