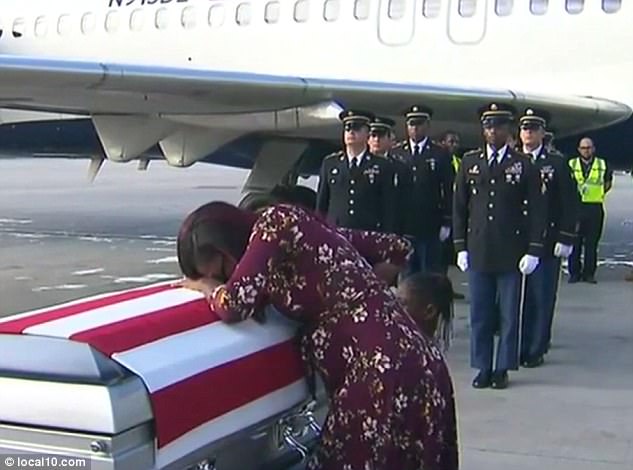 Here at Committed Conservative, we have been very critical of President Trump when his words and deeds have warranted it, but we also defend him when he is unfairly attacked.
.
The “reports” in the establishment “news” media about Trump’s conversation with the widow of a fallen soldier are more than unfair. They are an assassination attempt on Donald Trump’s presidency.
.
The establishment “news” media are widely reporting that Trump called the widow of a fallen special forces soldier and callously said that her husband “‘knew what he signed up for.” These reports are based solely on the word of an extremely partisan Democrat congresswoman who claims to have been in the car with the widow during that conversation and to have heard it over the car’s speakers.
.
Trump, this morning, claimed that this congresswoman completely fabricated his alleged comment, but let’s assume she’s telling the truth. What most of the “news” media are not reporting is the full alleged quote given by this congresswoman, which was that the fallen soldier “‘knew what he signed up for… but when it happens it hurts anyway.”
.
In other words, even as told by the partisan Democrat congresswoman, when we look at Trump’s entire alleged statement, it is clear that his intent was to express admiration for the fallen soldier because he voluntarily assumed the risk of being killed in the service of his country and to say that even though both the soldier and his wife knew that he could be killed, it is still a shock when it happens.
.
Granted, Trump’s alleged wording was clumsy, but who among us hasn’t struggled to find the right words to express sympathy when trying to console someone grieving the loss of a loved one? And name one president who didn’t occasionally say something that came across in a way completely different than he intended.
.
I have written numerous columns condemning Trump for intentionally making provocative statements designed to shock and offend, but this is not one of those occasions. Intellectual honesty demands that we look at his alleged words in context to understand his intent, and in this case, it is intellectually dishonest to conclude that he meant anything other than to express his admiration for this soldier and his sympathy for that soldier’s widow.
.
When an imperfect human being, as every president is, lives in a fishbowl, he is occasionally going to say things that come across differently than he intended. Let he who is without sin cast the first stone.
.
Trump’s sin was that he allegedly chose his words to this widow poorly. That was an honest and innocent mistake.
.
The “news” media’s sin was that they intentionally reported only a portion of Trump’s alleged comment out of context to deliberately create the impression that his statement was callous rather than sympathetic. That was a defamatory effort at character assassination.
.
Trump routinely makes provocative statements that invite attacks on him by his detractors, including the entire “news” media establishment. But that doesn’t justify their deliberately taking his alleged statement of admiration out of context to make him appear to be expressing the opposite sentiments.
.
It’s bad enough that a Democrat congresswoman is exploiting the death of an American soldier to make political attacks on the president. It’s even worse when the “news” media go the additional step of taking her alleged quote out of context to smear that president. How much lower can the “news” media sink?
.