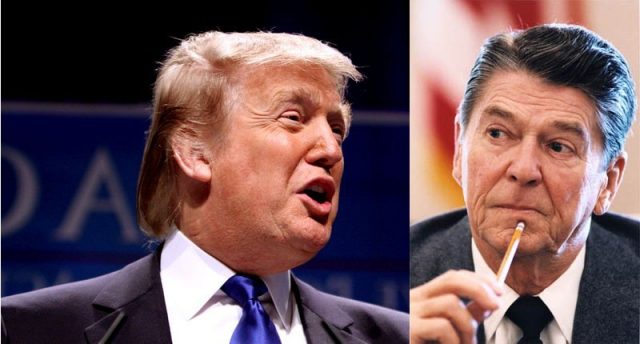 To put it another way: Why are you a Republican?

This is a vital question: Are you a Republican because you want to belong to a social organization, or is it because you’re a committed conservative who wants to live in a country governed with conservative principles?

Committed conservatives are Republicans as a means to achieving conservative governance, and that’s why we are appalled by President Trump.

Simply put, Donald Trump is destroying any chance of passing the conservative agenda into law.

Republicans hold the presidency and majorities in both houses of Congress. What do we have to show for it?

Justice Gorsuch. (And we had to change the rules to get him confirmed.)

That’s a cop-out. A convenient scapegoat.

No one could have gotten Trump’s agenda passed through Congress because he has made it nearly impossible for congressional Republicans to support his agenda.

In fact, Trump’s conduct is the perfect example of how to kill a legislative agenda: He conducts himself like an impetuous juvenile who regularly embarrasses our country and people, stabs his friends in the back, and shows no leadership whatsoever to advocate for his agenda.

So where does that leave congressional Republicans?

Those who deflect blame from Trump to Congress fail (or refuse) to understand the inescapable fact that our Republican majorities consist of members who represent diverse districts. For example, some members represent purple or blue districts and can’t vote for an absolute repeal of Obamacare and get reelected without political cover. Others represent solid red districts and can’t vote for anything less and get reelected without political cover.

But with the right kind of presidential leadership – the kind utterly lacking in President Trump – these members could have the political cover they need to take risks on behalf of the president.

Remember President Reagan? The Democrats controlled the House of Representatives for his entire eight years. Yet he got Congress to pass into law historic tax reductions that resulted in the longest peacetime economic expansion in history. And he got Congress to increase the defense budget by tens of billions of dollars, rebuilt and fortified the military, and, after a 40-year stalemate lasting through eight presidents, achieved an absolute and total victory over the Soviet Union in the Cold War.

Reagan achieved these historic accomplishments and secured his place as one of America’s great presidents despite the opposition party controlling the House of Representatives throughout the entirety of his presidency.

Donald Trump, by contrast, enjoys Republican control of both houses of Congress but can’t get anything beyond naming post offices passed into law.

So, what did Reagan do differently than Trump?

Reagan conducted a never-ending campaign over the heads of the hostile “news” media directly to the American people advocating for his (and our) conservative principles and policies. Reagan was the prototypical committed conservative, and he consistently inspired people with a positive conservative vision. He explained in common-sense language tinged with good humor how our ideas improve everyone’s lives. And because he won the support of the American people, congressional Republicans across the center-right spectrum had cover to take risky votes for Reagan’s conservative agenda. The Democrats dared not thwart the will of the American people whose support and confidence President Reagan had won.

Donald Trump is the anti-Reagan.

He has never been a conservative, doesn’t understand conservatism, and despite the fact that he is offering a generally (but inconsistently) conservative agenda, he is utterly incapable of explaining why conservative policies are good for the American people.

Donald Trump never inspires people with a positive vision. All he ever offers is fear and hatred for anyone who either opposes his agenda or is a convenient political scapegoat.

He picks imbecilic and pointless fights with celebrities and other public figures and frequently attacks them in grotesquely personal ways that dishonor the high office with which he was entrusted by the American people.

He exaggerates and lies so often that no one believes anything he says.

He makes promises he knows he can’t keep and threats he has no intention of enforcing.

And while the Democrats and their lapdog “news” media allies dishonestly savage his legislative agenda, he does absolutely nothing to counter them by advocating for those policies directly to the American people and attempting to win their support.

He demands absolute loyalty from his staff, from Congress, and from the American people, but he consistently betrays those who give him such loyalty.

To wit: Want to know why Trump couldn’t get Obamacare repeal and reform through the Senate? It wasn’t Mitch McConnell’s fault. It was Donald Trump’s: After Speaker Ryan pulled a rabbit out of a hat and got Trump’s controversial Obamacare reform bill through the House with Trump’s endorsement, Trump threw those House Republicans under the bus and rendered the bill DOA in the Senate by publicly characterizing it as “mean, mean, mean.”

President Truman kept a sign on his desk that said, “The buck stops here.” Donald Trump routinely burns the buck to cinders.

Just yesterday, Trump publicly stated that he regrets appointing Jeff Sessions as Attorney General. (I’m not a fan of Sessions as AG for many reasons, including his tyrannical and unconstitutional use of civil asset forfeiture, but that’s beside the point.) Sessions was the first U.S. Senator to endorse Trump for president, and he campaigned tirelessly for Trump. As AG, Sessions has again worked tirelessly to implement Trump’s agenda. But because he recused himself from the Russia investigation due to the appearance of a conflict of interest, Trump publicly humiliated him and threw him under the bus.

And even more: Trump has threatened to primary any Republican who fails to support his agenda. He is already actively trying to recruit a primary opponent against Sen. Jeff Flake (R-AZ).

As a result of his hateful, vindictive, back-stabbing, and obnoxious conduct, polls show Trump with the lowest presidential approval rating ever recorded and show him losing by substantial margins against every prominent Democrat considering running against him in 2020, including such radical leftists as Sens. Bernie Sanders (who will turn 79 in 2020) and Elizabeth Warren.

Trump’s blindly loyal followers, desperate to ignore these alarming facts, argue that everything’s fine because he’s still more popular than Hillary Clinton. They actual prove my point in doing so: Hillary Clinton is so vulgar to the American people that even when she’s not running for or holding office, her approval is in the low 30s. Yet she got three million more votes than Donald Trump. We won’t have the Electoral College to save us in the 2018 congressional mid-terms. (And, to state the obvious, Hillary Clinton won’t be on the ballot next year or, most likely, in 2020.)

So, if you were a Republican representative or senator, would you put yourself out on a limb for this president?

Sadly, Trump’s blind followers, the social Republicans who place their loyalty in men over ideas, actually would fall on their swords for him. Once this column has been circulated a bit, you’ll see that for yourself as they yet again call me a RINO (or, embarrassingly, a “Rhino”) for not blindly supporting a non-conservative train-wreck of a president who only incidentally and opportunistically is a Republican. I’ve heard all of their excuses and protests before:

“They all said he’d lose, but he ended up winning.”

“Trump is going to be Trump, but it works for him.”

“It’s not Trump’s fault. It’s Ryan’s and McConnell’s” (which I debunked above).

“The polls showing strong disapproval of Trump are rigged.” (All of them?)

Those people are loyal to Donald Trump personally, not to the conservative agenda that is supposed to be the Republican Party’s very reason for existing. They have convinced themselves that he is infallible, no matter what he says and does, and that the disastrous consequences of his recklessness and vindictiveness are merely “fake news.” As Trump once said, he could stand on Fifth Avenue and start randomly shooting people, and his social Republican blind loyalists would continue to support him. (And to this day they don’t recognize what a condescending insult that was to them.) Those people would rather hear Donald Trump’s belligerent rhetoric than actually see conservative policies become law.

Well, anyone can talk about conservative ideas (including demagogues like Trump who use conservatism as a means to his personal ends rather than as an end in itself). We’ve been doing that for decades while the left has, you know, actually passed and implemented theirs.

People who are committed to actually achieving our conservative vision and not just talking about it need to recognize that Donald Trump is the foremost impediment to realizing that dream.

So where do you stand? Do you stand blindly with a man, no matter how ineffective, disloyal, and destructive to achieving our conservative objectives as he may be, because he opportunistically calls himself a Republican? Or do you stand with and remain loyal to the conservative agenda that is supposed to be at the heart of what it means to be a Republican?