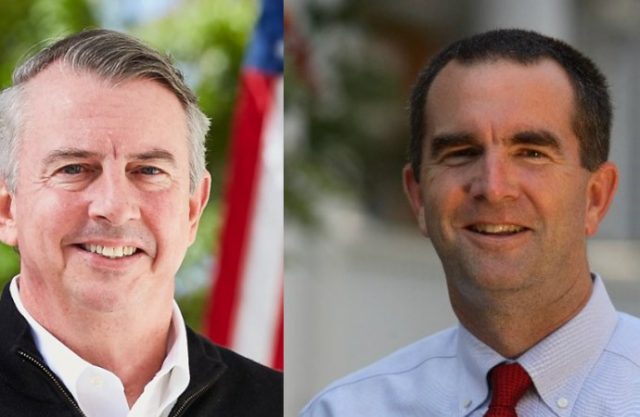 Yesterday’s primary elections in Virginia had some startling results that should be seen as a wake-up call for Republicans nationwide.

Here are some of the important things we now know:

The November election is going to be about Donald Trump.

Both parties had competitive races for Governor and Lieutenant Governor, but the turnout by Democrats was a full 50% higher than the Republicans.

I spent the whole day yesterday working a poll in a traditionally solid red precinct in Virginia Beach. Turnout in this precinct was about four times the amount predicted because Democrats turned out in equal numbers to Republicans. This 1:1 ratio of Democrats to Republicans in this normally overwhelmingly Republican precinct was unprecedented in modern times.

This huge statewide disparity of party turnout is mostly the result of an enormously motivated and energized Democratic base that is champing at the bit to send a message to President Trump, whom they revile. However, it also reflects a relative lack of motivation and enthusiasm by Republican voters.

Donald Trump is easily the most controversial president in modern times. He is unfairly maligned on a daily, sometimes hourly, basis by hostile “news” media and by a deranged Democratic Party. But he also inspires contempt through his many stupid and unnecessarily provocative tweets and statements.

In 2009, Virginians responded to a frighteningly leftist agenda by President Obama by giving landslide victories to the entire Republican ticket for statewide offices. The disparity in yesterday’s turnout indicates that the same is likely to happen for the Democrats this year as a backlash against President Trump.

Ed Gillespie had enormous advantages in the race for the Republican nomination for Governor. He had recently shocked many political observers by nearly defeating popular Democratic Senator Mark Warner, thereby demonstrating his ability to appeal to a wide cross-section of Virginia voters while running on a mainstream conservative platform.

However, he is also indisputably a creature of The Establishment™. He’s the former Chairman of the Republican National Committee and the Republican Party of Virginia and spent years working as a Washington lobbyist.

His main opponent in this year’s primary was Corey Stewart, the Chairman of the Prince William County Board of Supervisors. Stewart ran a campaign modeled largely on Trump’s presidential campaign. He was brash, insulting, provocative, and borderline racist. His campaign focused largely on preserving Virginia’s Confederate heritage, and in the final days of the race he expressed open bigotry against gays.

A Republican ticket led by Corey Stewart would have been an unmitigated disaster that would have done enormous damage to the brand of an already beleaguered Republican Party of Virginia. He would have alienated just about every minority bloc of votes as well as large numbers of other voters, including many Republicans like myself, who were disgusted with his polarizing and bigoted campaign.

Stewart’s strong showing demonstrates that the anti-establishment sentiments of Republican voters have not been satiated with the election of Donald Trump to the presidency. Large numbers of Republicans remain willing to nominate anti-establishment candidates who are unlikely to be able to win over more mainstream candidates who are far more electable.

This division in the GOP presents a huge obstacle to winning high offices and must be healed if the Republican Party is to avoid electoral routs. The answer to this issue lies primarily with those Republicans already in office, too many of whom demonstrate cowardice in pursuing a conservative agenda for fear of having the “news” media and Democrats saying bad things about them.

The bottom line is that as long as Republican elected officials demonstrate political cowardice and refuse to work with a confident belief in our conservative principles to advance a truly conservative agenda, polarizing populists like Corey Stewart will continue to divide the party, and Democrats will continue to benefit.

The Washington Post has enormous influence over Democratic voters.

Ralph Northam is a former state senator from Norfolk who was a moderate in the General Assembly. Indeed, at one point he had decided to switch parties and become a Republican until a Republican senator stupidly inadvertently leaked the news to the Democrats, who were able to arm-twist Northam into staying put. Northam’s 2013 campaign for Lieutenant Governor positioned him as considerably more liberal than his record in the State Senate, but he remains a pragmatist who has always been able to work well with the Republican majority in the General Assembly.

Tom Perriello’s claim to fame is that he pulled off an enormous upset in 2008 by defeating Republican Congressman Virgil Goode in Virginia’s 5th district. Perriello established himself as a left-wing ideologue before being defeated in the following election by Republican Robert Hurt. Perriello is a darling of the movement leftist activists that have dominated the Democratic Party in recent years.

A couple of weeks ago, polls showed Perriello leading Northam. Democratic nominations are decided largely by the enormous bloc of Democratic voters in Northern Virginia, who tend to be motivated left-wingers, which gave Perriello a natural base to provide him with a victory.

Virginia is a bellwether for the country and currently indicates serious problems for the GOP in 2018.

Virginia is a microcosm of the United States as a whole. It has a large industrialized liberal population in the north, a more conservative rural and suburban population in the south, several urban centers, coal mines and mountains to the west, and an ocean to the east.

A good example is 1993, the first year of Bill Clinton’s presidency. He had engaged in a number of unpopular liberal measures, and Virginia voters responded by giving former congressman George Allen a huge upset victory over incumbent state Attorney General Mary Sue Terry. The following year, Republicans nationwide won landslide victories in which Republicans gained control of the House of Representatives for the first time in 40 years.

Likewise, in 2009, Barack Obama spent his first year as president pursuing his effort to nationalize the health care system. Virginia responded by electing Republican state Attorney General Bob McDonnell and his running-mates for statewide office by margins of over 20 points. The following year, Republicans again won landslide victories across the country and regained control of both houses of Congress.

The fact that Democratic turnout in yesterday’s primaries was 50% higher than the Republicans cannot be ignored. As discussed above, this disparity in turnout indicates a Democrat rout in November unless something is done to change the dynamic of the election. And if there is a huge Democrat victory in November, it likely forecasts similar results in next year’s congressional elections.

What does this all mean?

All of this boils down to one thing: Republican leaders need to have a come-to-Jesus intervention meeting with President Trump.

Trump is pursuing a responsible and bold conservative agenda, but he is dramatically undermining his own effectiveness with his asinine provocative and insulting tweets and statements. Yesterday’s primaries demonstrate that he’s dragging the rest of his party down with him.

Virginians, like all Americans, want to be proud of and inspired by their president, and they want to see results that improve their lives. Trump does not inspire people, and he is his own worst enemy in terms of getting his agenda through Congress.

Unless Trump changes his behavior, grows up, starts acting respectably, and starts getting results that people see in their own lives, the Republican Party is looking at disaster both this year and next.